Here is what London has to offer this Christmas 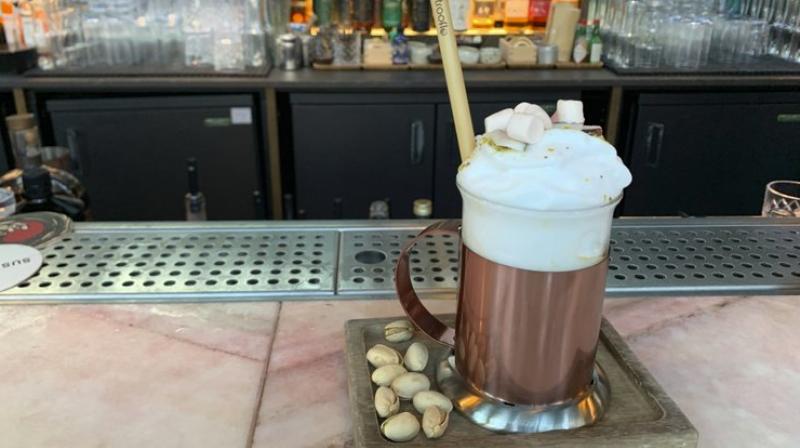 This winter, McGovern has created a new version of his hot buttered rum punch, adding fudge for an even creamier texture. (Photo: AP)

Mulled wine, warm spiced cider and hot toddies have long been British staples during winter. Whiskey expert Ross Dennis at Dewar’s Aberfeldy Distillery explains that the hot toddy comes from Scotland. “The first mention of what we now think of as a hot toddy comes about in the 1780s. We think the name hot toddy comes from the Todian Well … an ancient water source in Edinburgh,” he says.

The traditional recipe mixes honey and hot water with a shot of whiskey, a squeeze of lemon, and a cinnamon stick and orange slice to finish. “In the 18th century, it would have been a very common thing to mix whiskeys with other ingredients to make it more palatable. They didn’t have the same cask management that we have today,” Dennis says.

While the hot toddy remains popular, many cocktail bars now offer their own seasonal winter warmer. Here are five examples from London’s cocktail scene, with tips for the home mixologist:

Rewind to a ‘70s Christmas at the kitsch seasonal pop-up ``Miracle,” transported from New York to the Henrietta hotel in Covent Garden. Surrounded by garish festive cheer, you can enjoy a ``Bad Santa’’ served in a winking Santa mug.

“It’s based on rum,” bar manager Nico Brulin explains. “There’s a bit of Arak, which is kind of like a variation of sugar cane. We do date-infused oat milk and spiced vanilla syrup, and also some black chai tea. So it’s like totally Christmas vibes, all the flavors you can find in one drink.” The smell of the spices, he adds, will have you ``feeling like a kid again.”

For a more sophisticated tipple, head to Manetta, the atmospheric, art deco basement bar at the Fleming hotel in Mayfair. The hotel was established in the 19th century, and the bar became a glamorous hangout for arts and literary figures in the ’30s.

Bar manager Pasquale Ferrillo makes an upmarket and extravagant version of wassail, a hot mulled cider drunk at Christmastime in medieval England in hopes of a good harvest the following year. “I use cinnamon, fresh ginger, cloves. They bring some nice Christmas atmosphere and some sweetness to the cocktail,’’ says Ferrillo. ``Plus, of course, we use apple juice … and we serve it in combination with cognac.”

Soho cocktail bar Swift is serving a mulled wine with a difference this season. “We thought we’d do a bit more of a richer, more alcohol-full one with bourbon and chestnut, orange and red wine. We added a little bit of chocolate as well,’’ says senior bartender Sam Ameye.

He uses a Malbec red wine, and says bourbon enhances the flavours. “It’s that kind of spirit that, because it has such rich, caramel, grainy flavours, works really well being heated,’’ Ameye says. Its nutty taste also goes well with the chestnut, he says.

Back in Covent Garden, at Sushisamba’s latest outpost, bar manager Daniele Ziaco has created this wintery espresso martini. He starts by combining vodka with a hot double espresso and a dash of sugar, adds a measure of amaretto for a nutty taste, and then adds coconut and pistachio foam.

The top is garnished with marshmallows, pistachios and coconut. Grey Goose brand ambassador Ambre Morin says vodka’s versatility makes it ideal for modern takes on the hot cocktail. Her advice for home cocktail makers: Be creative.

“Just try to do it step by step and add things,’’ she says. ``I would take inspiration from mulled wine, for example. Play around with that; try to twist your hot coffee or your hot chocolate. And think about flavours such as, we know that chocolate and orange match. If we think about mulled wine and pear, that’s great. I would play around with flavours a lot, and spices.”

Finally, over in East London at the Queen of Hoxton’s rooftop bar, head bartender Chris McGovern agrees it’s all about experimentation, but adds, “I’d stick to the spices that a lot of people recognise. So, your festive spices like cinnamon, clove, star anise. But then do experiment with totally new flavours like maybe pineapple, or play around with gins like hot gin and tonics. Things that you can recognise, but then give it a festive twist.”

This winter, McGovern has created a new version of his hot buttered rum punch, adding fudge for an even creamier texture. “Our hot buttered rum has always been a firm favourite with our customers. The spices we use — cinnamon, nutmeg, clove, peppercorns — it’s automatically the beginning of the festive season,’’ he says. ``We add a bit of spiced rum, calorific amounts of butter, and it’s just a real winter warmer … almost like a soothing jacket going into the festive season.”

He melts the butter and fudge in a pan with all the spices and an apple juice base, adding the rum at the end before pouring the mix into a tin mug. McGovern’s top tip for home mixologists making hot serves is never rushing it. “You get the most flavour when you let it mull for maybe up to one hour, up to six hours,’’ he says. ``I always like to add the alcohol at the end so you get all that flavour and you don’t lose anything.”