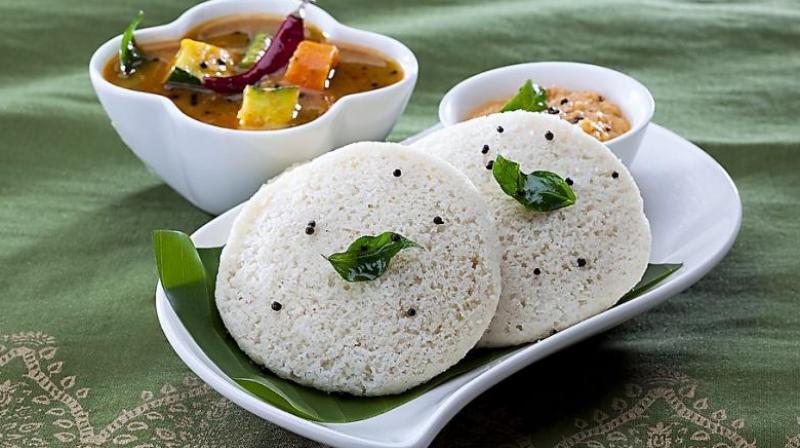 It all began with British historian Edward Anderson responding to a question from food aggregator with this innocuous statement on Twitter, "Idlis are the most boring things in the world." (Pixabay)

New Delhi: Some would say it's much ado about the idli, that humble staple of south India and the centre of a furious debate on social media after a British academic disparaged it as "boring". And others that this is a cultural, "civilisational" issue and the brouhaha is entirely in keeping with its status in the annals of India's diverse cuisine.

Either which way, the steamed rice and lentil 'cake' -- a pan India favourite, a must-figure in most breakfast buffets, and the choice of the discerning dieter as well as the foodie for its health quotient -- is suddenly much talked about and much discussed.

Paired mostly with coconut chutney, sambhar and some spicy gunpowder soaked in ghee, the idli moved from the accounts of thousands of Twitter users to national and also some international media outlets with several food writers and journalists dishing up articles that explored its origins and reflected the social media debate.

It all began with British historian Edward Anderson responding to a question from food aggregator with this innocuous statement on Twitter, "Idlis are the most boring things in the world."

And the floodgates opened.

Author and Congress MP from Thiruvananthapuram Shashi Tharoor termed the professor "truly challenged" and Twitter users, some indignant, some passionate and some tongue firmly in cheek, flooded the microblogging site with variations of why they like the Indian rice cakes and also why they don't.

Tharoor's son Ishaan Tharoor, a US-based columnist, said, "I think I have encountered the most offensive take on Twitter."

"Yes, my son, there are some who are truly challenged in this world. Civilisation is hard to acquire: the taste & refinement to appreciate idlis, enjoy cricket, or watch ottamthullal is not given to every mortal. Take pity on this poor man, for he may never know what Life can be," tweeted the Congress MP.

Anderson, whose Twitter bio states that he works on the "politics and history of India & Britain, migration & diasporas", did also say his wife is from Kerala. He may have found the idli boring but loves "basically all south Indian food".

But idli fans were up in arms nonetheless. The idli has found a place in the Indian plate "and palate" because it's light on the stomach, inexpensive and tasty too, said many food lovers, historians and critics alike.

Terming Tharoor's tweet a "valid response" to Anderson, food historian Pushpesh Pant said the "beautiful and perfectly balanced food" is not just healthy but "cost effective" too as the batter can be used over several days for different dishes.

"I think idli is a beautiful and perfectly balanced food. It has lentils, it has rice and it gives you a very interesting mix of vegetable proteins. It is a steamed food, it doesn't take too much oil to make, also it is easy to digest."

"The batter you prepare to make idli on the first day can be used to make idli which is the softest, second day you make dosas which are slightly less fluffy, third day you use it for uttapam, so this cycle continues," Pant told PTI.

While the basics of making a steamed rice cake remain the same -- rice flour, urad dal (black gram) and a fermenting agent -- several versions of the idli are available in India's south.

If in some parts of Karnataka the flat saucer-shaped 'thatte idli' is preferred, in others 'muday idli' steamed after being wrapped in pine or coconut palm leaves has foodies salivating.

Apart from the most commonly available plain idli and sambar from Tamil Nadu and Kerala, the coastal state of Goa has the 'sanna', a savoury steamed rice cake shaped like a hockey puck. The unlikely combination of idli with chicken or mutton curry can be found in Andhra Pradesh.

Although he is not an idli fan, food critic Rahul Verma believes the taste comes from what it is eaten with.

"Idli doesn't have a taste of its own, it depends on what goes with it. Idli either with chutney or sambar, or chicken, mutton or pork curries make all the difference," Verma said.

On his food journeys, Verma has enjoyed gunpowder idlis from Tamil Nadu, mini idlis with fried chicken from Andhra Pradesh and the softest ones from Karnataka. But he can't forget the idlis, far from its native land in south, he had at a bus stop in Karnal, Haryana.

"I broke two spoons trying to eat those idlis. I can only request everyone to make only what they are capable of," Verma said.

"Famous food historian KT Achaya had written some path breaking books on the origin of different food in India. According to him, idli came to India from Indonesia. The cooks employed by the Indonesian Hindu kings may have made the first idli. And it came to India during the 9th to 12th centuries, but people here wouldn't believe in that origin," Verma added.

For Neelima Vaid, an MA student and "home foodie" from Delhi, the best idlis are those made by her mother.

"She adds dry fruits to it, sometimes roasted ones, and it adds an entirely different taste and texture to idli. I know people say idli is all about what goes along with it, but homemade idlis stuffed with dry fruits -- you don't need anything with that," Vaid said.

Food critic Pritha Sen said almost every Indian state has a steamed dish similar in concept but idli became the best known because its patrons took it all over the world.

"The easiest that comes to mind is Gujarat with their dhoklas and stuff, in Bengal we have something called 'bhapa pithe'." she said. " ...but unfortunately the urban elites have kind of forgotten this... the Udupis have gone out and spread it across the world. The rest of India has somehow not been able to do that," she rued.

Before the debate heated up in India, it had found a connect in the US election.

Democratic vice presidential candidate Senator Kamala Harris, during her maiden address to the Indian-American community in August, recalled how her Indian origin mother always wanted to instill in her a "love of good idli".

"Growing up, my mother would take my sister Maya and me back to what was then called Madras because she wanted us to understand where she had come from and where we had ancestry. And of course, she always wanted to instill in us, a love of good idli," Harris said.