Your guide to making pocket-sized drinks that pack a potent punch. 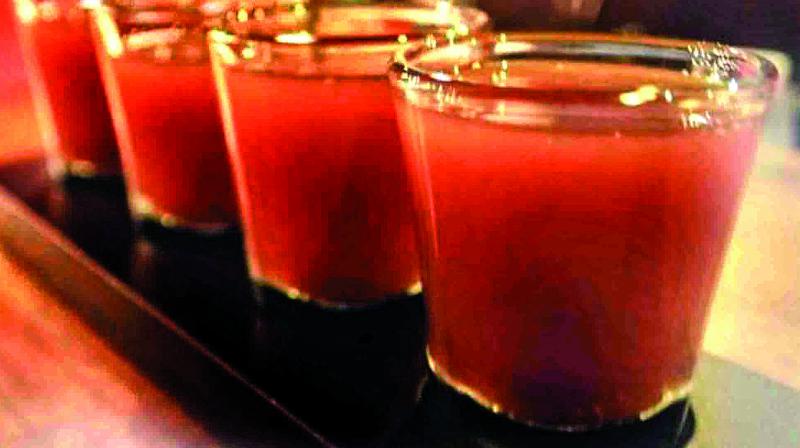 Helping its cause is the fact that they are as easy to make, as they are to gulp down.

It is quite possible that you may indulge in a few shots only when you’re at the bar. However, these quick, potent drinks shouldn’t just be reserved for a nightout. What works in the humble shot’s favour is that when you’re looking to get a quick buzz, it does its job.

Although shots have been around for a long time now, they’re getting popular only now. What was synonymous with partyhoppers, is now consumed with a vengeance even on a casual nightout. What makes it a stiff competition to cocktails is that it is tasty, and quick. There is a whole variety, from refreshing shots to dessert shooters, to classic shots, which can easily be replicated at home. Helping its cause is the fact that they are as easy to make, as they are to gulp down.

A popular option, vodka is the go-to spirit when it comes to make shots, and an easy way to get a night started. Vodka, being a neutral flavour, blends with a lot of combinations and still packs a punch. Take for instance Kamikaze, made of vodka, triple sec and limejuice; or the dirty martini shooter, which is made of vodka, vermouth and olives. Obviously, you want to exercise caution and drink responsibly when focusing on shots.

The key here, really, is to ensure that there is a perfect balance of flavours. Accurate measurement of ingredients is essential, since even an extra drop of an overpowering ingredient can ruin a great shot.

While my personal favourite is the Jagerbomb, there are no stops to pull when it comes to experimenting. So for instance, I created a drink called Nutjob, which is a blend of vodka and tender coconut water. Then there’s Sex in the Paddy Fields, which is a concoction of vodka, imli chutney with orange and cranberry juice. For those looking at rum shots, add cinnamon syrup with a drop of ginger syrup for an interesting drink. Another idea is to use gin and kokum juice with a bit of sugar syrup.

There is, however, a path less taken: dessert cocktails. I have also observed that people are leaning towards better-tasting shots, even if they have less alcohol, which is why you will see a lot of dessert shots appearing on the bar menu these days. While I have seen a couple of shots with chocolate éclair, I decided to give a spin to a dessert shot by experimenting it with payassam and bailey.

Today, anything with drama gets popular — flaming shots, jelly shots and ping-pong shots are a few instances. But the thumb rule is that the fun of a good shot lies in its simplicity. Happy experimenting!

Vijay Nair is the bar supervisor at SamBar Pub and Kitchen