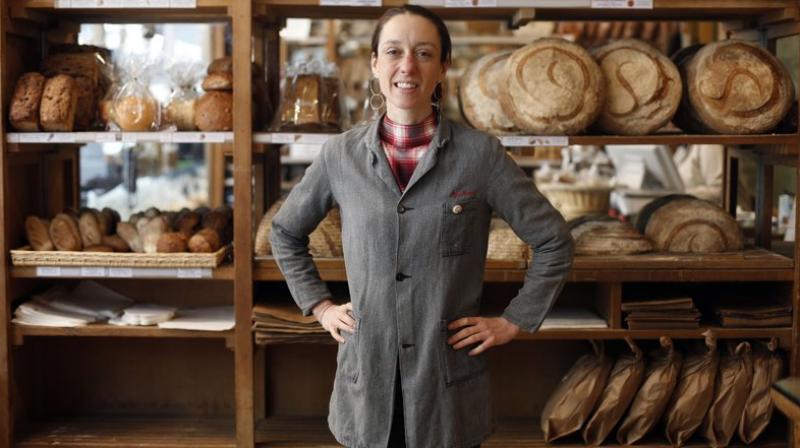 Fans of the famous loaf can now tackle the 'big hug of bread' at home, with Poilâne sharing the secrets of the company’s sourdough in a recipe which stretches over three pages. (Photo: ANI)

Paris: If there is such a thing as baking royalty, Apollonia Poilâne might be its queen. The 35-year-old is a third-generation baker for the world famous Poilâne in Paris. It was founded in 1932 by Apollonia’s grandfather Pierre and has inspired chefs, musicians, poets, and artists worldwide for nearly 90 years: Surrealist icon Salvador Dalí commissioning a bedroom suite made completely out of bread for a 1971 exhibition. While it started in Paris, it has a location in London and a pop-up in New York City until Nov. 3.

Now, Apollonia Poilâne is opening the company’s oven doors wide with her first English-language cookbook, “Poilâne: The Secrets of the World-Famous Bread Bakery,” a weighty collection of nearly 100 recipes.

Speaking at the bakery’s hub under a replica of the Dalí bread chandelier, the soft-spoken CEO is reluctant to discuss her celebrity clientele, which includes Oprah “I Love Bread” Winfrey, Robert De Niro, and Natalie Portman. But she quick to praise the women she calls her “guardian angels” — TV chef Ina Garten, cookbook author Dorie Greenspan, and the owner of Chez Panisse, Alice Waters, the latter of whom provides the book’s foreword.

“They’re ladies I look up to for what they have accomplished. They inspire me, and I refer to them as my guardian angels for their words of wisdom,” says Poilâne. Those words of wisdom have proven very important to Poilâne, who took over the family business at 18 after her father Lionel and mother Irene were killed in a helicopter crash in October 2002, leaving her and her younger sister Athena orphaned.

“I was incredibly fortunate to be surrounded by a fantastic team, let alone the friends of my parents who helped me also go through those times,” says Poilâne. The day after the tragedy, Apollonia headed straight to the bakery, says she sat at her father’s empty desk and resolved to run Poilâne.

“There was no question for me of whether I was taking over the family business or not. I had been essentially groomed since I was a child, whether I realized it or not,” says Poilâne, whose sister chose to study visual arts. “It essentially happened sooner than planned.”

She was CEO for a company worth eight million euros (USD 8.9 million) with over 130 staff while also studying economics and business at Harvard University. Now, with annual sales topping 12 million euros (USD 13.3 million) annually with around 160 people employed, demand for the company’s signature Poilâne loaf has never been higher.

“A Poilâne wheat sourdough loaf stands out because of its size, because of its format, because of its flavors,” explains the baker. “The whole sensory experience when you have this big hug of bread is extraordinary — and it keeps. So it’s another thing that’s very special because you don’t need to waste bread.”

Fans of the famous loaf can now tackle the “big hug of bread” at home, with Poilâne sharing the secrets of the company’s sourdough in a recipe which stretches over three pages. While home cooks may not be able to entirely replicate the conditions in which the loaves are baked (unless they have a wood-fired oven that can reach 500 degrees Fahrenheit), Poilâne is happy with the final product that the book’s recipe produces, saying she was “able to duplicate the elusive balance of acidity and sweetness” of the bread which has influenced countless bakers including Acme Bread Company founder Steve Sullivan.

Sullivan calls the original Poilâne loaf “giant, rich and tangy” and “completely unlike anything I had ever tasted.” Another fan is Tartine’s Chad Robertson. “I love that really mild acidity that is very balanced that you get with the Poilâne bread,” says Robertson, who is acknowledged as one of America’s finest bakers. “That bread never sort of followed trends. It was its own category of everything. Something that’s really just true and authentic and elemental at its core endures.”

As well as containing recipes for French classics like croissants, pains au chocolat, brioche, and croque mademoiselle, “Poilâne: The Secrets of the World-Famous Bread Bakery” also offers suggestions on what to do with leftover bread and provides numerous variations on breakfast and lunchtime staples.

The recipes that Poilâne is most proud of are her gluten-free cornbread, developed over the course of 15 years (using a mixture of corn flour, oat milk, and flax seeds), and her late father’s “bread sandwich,” which consists of a piece of thin bread, buttered and toasted, sandwiched between two slices of bread.

“It is a wink to my father, who used to give this recipe partly jokingly,” smiles Poilâne. “But I took it for its word as bread of quality is fulfilling. So, the sandwich is about using bread as a filling.” It’s one of a number of playful recipes in a book that celebrates the many and varied uses of bread and provides a blueprint for where the company might be heading next. As Poilâne states, “my family would appreciate that there are many more doors yet to open.”