What you need to know about Ramen, Sushi and IZUMI

Chef Nooresha Kably from Izumi, a Japanese restaurant in Bandra, talks about the flavourful menu, how to eat sushi and more 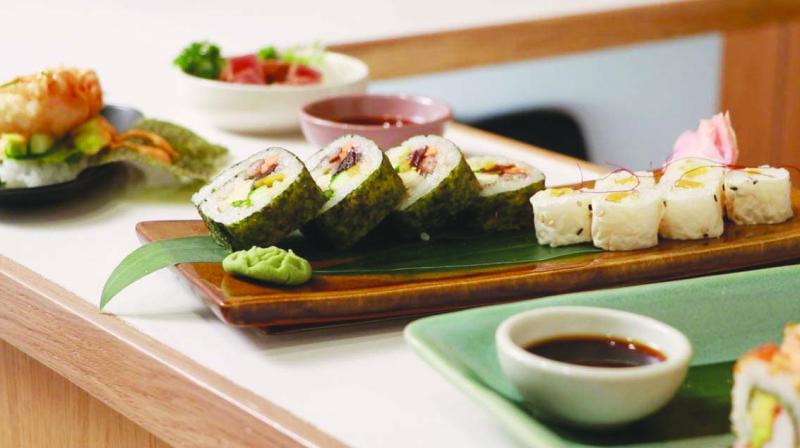 At Izumi, the broths take hours.

Chef Nooresha Kably from Izumi, a Japanese restaurant in Bandra, talks about the flavourful menu, how to eat sushi and more.

1. In the beginning, there was the broth.
The broth is the soul of the ramen. There are three basic viscosities. The kotteri is a rich, dark broth, opaque with the emulsified fat, minerals, and protein leached out of bones simmered for hours and hours. The assari broth is a light, thin liquid that is made when vegetables, fish, or bones are cooked quickly. The paitan is a white bone broth.

2. Broth + Flavouring = Soup
Your ramen will have one of four main flavours – shio (just salt), shoyu (seasoned with a sauce made from fermented soy bean – not soy sauce), miso (turns the soup opaque and has that familiar, complex umami), and tonkotsu, the richest of all – a pork bone broth that is glistening with gelatin.

3. At Izumi, the broths take hours…
“The pork is a rich, creamy broth that is slow cooked for over eight hours,” says Chef Nooresha. “The chicken ramen is called chicken paitan. We serve it in five flavours, each making the same broth different. Veg shoyu is a chintan soup (a clear soup slow cooked for two hours), which is very distinct, flavoured with konbu, soy, shiitake and onion.”

4. Okay but straight up – is the vegan broth as good as the tonkotsu?
“We make two vegan broths for vegetarians,” says Chef Nooresha, “and both taste great! One is a veg shoyu. The other is a miso broth that is creamy with soy milk and also served in a curry flavour (Japanese curry). At every tasting, the veg ramen has managed to hold its own despite the chicken and pork ramen served, so I’m very happy with the outcome of the veg. In fact, I’d strongly recommend the non-vegetarians try the veg broths.”

5. How should we eat sushi?
“The sushi school I attended emphasized nigiri as that’s real Edo (old name for Tokyo) sushi,” says Chef Nooresha. “You can pick the sushi up with your fingers. No dipping in soy as we put a nikiri sauce and garnish to complement it. And there’s no need to apply wasabi either and it’s already been put between the rice and seafood or vegetables.
“Even with rolls like uramaki, maki, hosomaki, futomaki – the flavours are all there. Maybe you need a touch of soy or wasabi.

“Gari (the pink pickled ginger) is to be eaten separately between each nigiri to cleanse the palate and ready you for the next seafood nigiri. Don’t pile the gari up on top of the roll and eat it together – it’s not done and not the right way at all.
“Wasabi, salt, soy, gari, sushi rice vinegar, and cooking sake all work as anti-bacterials and keep your stomach safe.”

6. What are the condiments on the table?
An incredible burnt garlic oil, jigoku tare (made with sesame and seasoning), a bottle of Kikkoman soy sauce, and a sesame mill.

7. What’s the story behind the whale moustache in Izumi?
“Not all whales have moustaches – so it’s a rare thing,”’ says Chef Nooresha. “It’s used to filter the plankton and krill they eat. My teacher in Japan gave it to me as a gift and said good luck with your Jap ramen Shop. He has one in his ramen shop too.”

8. What can fans of the Sushi Koi menu expect to see on the Izumi menu?
“Sushi being rolled out live,” she says, “sashimi cut, your order served immediately – not packed and delivered. And ramen! There are also some small plate specials, tuna, salmon, and hamachi that you may not have eaten before.”

9. Izumi makes its own noodles.
“I learned how to do it, and it’s easy and fresh!”