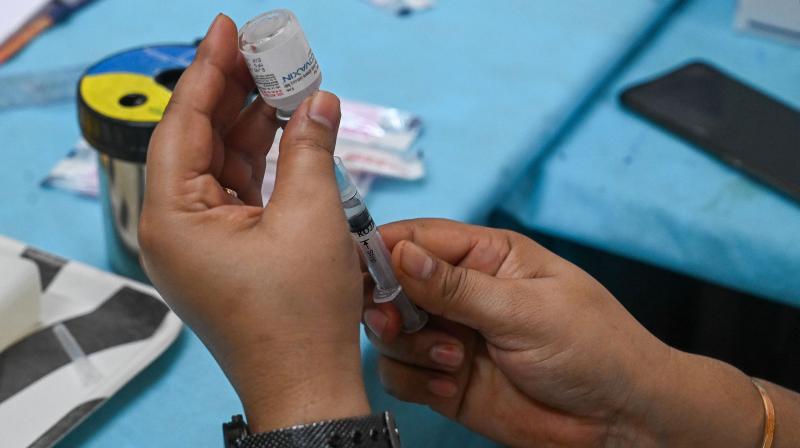 Researchers reviewed data from 728,321 individuals aged 12 or above who had received the third dose of the Pfizer vaccine. (AFP Photo)

Boston: A third dose of COVID-19 vaccine is effective in reducing severe disease outcomes compared to individuals who have received two doses at least five months ago, according to the largest real-world study of Pfizer booster shot published in The Lancet.

The study by researchers from The Clalit Research Institute and Harvard University was conducted in Israel, an early global leader in third-dose COVID-19 vaccination rates.

It is the first to estimate the effectiveness of a third dose of Pfizer-BioNTech mRNA COVID-19 vaccine against severe outcomes with adjustment for various possible confounders, including comorbidities and behavioural factors.

A recent clinical trial conducted by BioNTech included a smaller sample size and did not estimate the third-dose's effects for more severe outcomes.

The study took place from July 30 through September 23, 2021, coinciding with Israel's fourth wave of coronavirus infection and illness, during which the Delta variant was the dominant strain in the country for most new infections.

Researchers reviewed data from 728,321 individuals aged 12 or above who had received the third dose of the Pfizer vaccine.

These individuals were carefully matched 1:1 with 728,321 individuals who had received only two shots of the Pfizer vaccine at least five months prior.

Individuals were assigned to each group dynamically based on their changing vaccination status.

Vaccine effectiveness was found to be similar for different sexes, age groups and number of comorbidities, the researchers said.

The study also included a population-level analysis which found that infection rates began to drop for each age group 7-10 days after they became eligible for the third dose.

"These results show convincingly that the third dose of the vaccine is highly effective against severe COVID-19-related outcomes in different age groups and population subgroups, one week after the third dose," said Professor Ran Balicer, senior author of the study from Clalit Research Institute in Israel.

Professor Ben Reis from Harvard Medical School noted that one of the main drivers of vaccine hesitancy has been a lack of information regarding the effectiveness of the vaccine.

"This careful epidemiological study provides reliable information on third-dose vaccine effectiveness, which we hope will be helpful to those who have not yet decided about vaccination with a third dose," Reis said.

Professor Miguel Hernan from the Harvard T.H. Chan School of Public Health said the trial of the Pfizer vaccine provided compelling evidence of its effectiveness to prevent symptomatic infection, but the estimates for severe disease and specific age groups were too imprecise.