Since the harvested heart had to be transplanted to a recipient’s body in two hours, the best resources had to be put in place 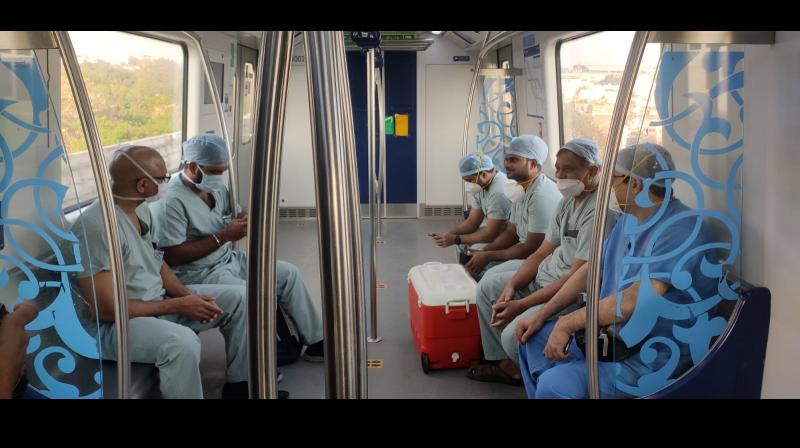 The 21-kilometre distance crossing 16 stations was covered in less than 30 minutes and with minimal disruption to traffic along the route. — By arrangement

Hyderabad: To transport a donor organ from a hospital in LB Nagar in the suburbs to another one at Jubilee Hills, officials used the Hyderabad Metro Rail for the first time ever on Tuesday.

As per an arrangement, Hyderabad Metro Rail Limited ran a special service to transport the heart of a 45-year-old brain dead patient that was harvested at the Kamineni Hospital and rushed to the Apollo Hospital.

A heart organ transplant team from Apollo Hospital came to Kamineni to examine the condition of the heart and carry out the mandatory procedures along with Jeevandan officers.

Since the harvested heart had to be transplanted to a recipient’s body in two hours, the best resources had to be put in place to quickly transport the donated organ.

Afer harvesting the heart, the team led by Dr A.G.K. Gokhale travelled by road from the Kamineni Hospital to the Nagole Metro Rail station, where a ‘green channel’ had been created.

From there, they took the special service, which ran non-stop, to the Jubilee Hills Checkpost station, from where they rushed to Apollo Hospitals via another green channel. The only passengers on this service were the doctors and the heart.

The heart was harvested at 3.30 pm and by 4 pm it was at Apollo Hospitals. The 21-kilometre distance crossing 16 stations was covered in less than 30 minutes and with minimal disruption to traffic along the route. The average speed of the train was 40 km per per hour.

Metro Rail authorities had kept all their stations on guard through the public announcement system of the movement of special train. K.V.B. Reddy, managing director of L&T Metro Rail Hyderabad Limited, said, “I must thank both Kamineni and Apollo Hospitals for reahing out to us with this request. We have taken all safety measures during the transportation.”