Just what is bipolar disorder?

People most at risk for bipolar disorder are those with a family history of the illness, says Dr Annunciation. 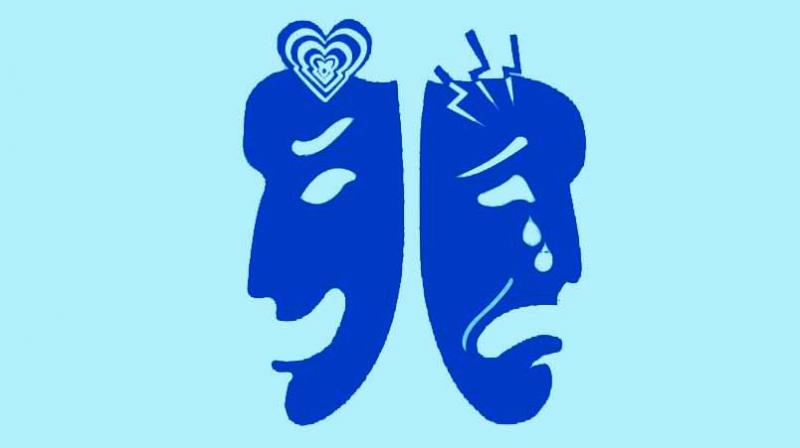 It’s a brain disorder that causes extreme and dramatic shifts in mood, energy, activity levels and the ability to carry out day to day tasks. People who have it may spend weeks feeling like they’re on top of the world before plunging into a deep depression.

When rapper YoYo Honey Singh disappeared from the music scene for close to two years, speculation was rife that he had substance dependence issues. The rapper subsequently revealed that he was suffering from bipolar disorder. “I had cut myself off from everyone. I didn’t come out of my room, didn’t get a haircut for months. For someone who has performed in front of a crowd of 20,000, I feared facing four to five people,” Honey Singh had said. Kay Redfield Jamison, psychiatrist, describes the bleak aftermath and emotional repercussions of ‘frenetic, bizarre, aimless behaviours’ that often accompany bipolar disorder, in her book An Unquiet Mind: A memoir of moods and memories.

Credit cards revoked, bounced checks to cover, explanations due at work, apologies to make, intermittent memories (what did I do?), friendships gone or drained, a ruined marriage. And always, when will it happen again? Which of my feelings are real... Which of the me’s is me? The wild, impulsive, chaotic, energetic and crazy one? Or the shy, withdrawn, desperate, suicidal, doomed, and tired one? Just what is bipolar disorder? According to psychiatrist Dr Wilona Braganza Annunciation, bipolar disorder is most commonly seen in persons between 15 to 25 years of age. Males tend to show an earlier age of onset than females. Childhood manifestation is rare.

Who is most at risk?
People most at risk for bipolar disorder are those with a family history of the illness, says Dr Annunciation. Other risk factors include childhood abuse, poor family dynamics, prolonged stress, poor interpersonal relationships, neurological damage to the brain, epilepsy, stroke, HIV, or any brain pathology that affects the structural integrity of the brain.'

What is the depression phase like
Jamison writes, “Depression is flat, hollow and unendurable. People cannot abide being around you when you are depressed. They might think that they ought to, and they might even try, but you know, and they know that you are tedious beyond belief: you’re irritable, paranoid, humourless and lifeless.”

Wendy Pereira, banker and housewife whose mother has been receiving treatment for bipolar disorder since the last 20 years adds, “When there is a ‘low’, there is a fear that the patient may take extreme steps of ending his or her life.”

Symptoms may include sadness, anxiety, loss of energy, hopelessness, trouble concentrating, sleep disturbances, loss of interest in activities once enjoyed, and suicidal ideation.

Who is manic
“During a ‘high’ phase, my mother tends to talk excessively and bluntly, leading to a lot of hurt and animosity in the relationship with family members. This is emotionally very challenging to deal with,” says Pereira. “Due to mum’s illness, the family has always been in a frame of tension and anxiety. As children, we missed the mother figure in our lives.”

The manic phase may involve a hedonistic triad of substance abuse, sexual promiscuity and reckless spending. There is usually a mix of irritability, depression, reduced sleep and racing thoughts. This may be accompanied by euphoria, manifesting as unusual energy and feelings of grandiosity.

Treatment modalities
Standard mood stabilisers, atypical anti psychotics, and non-anti manic, anti epileptic agents are emerging as potentially useful treatments for bipolar disorder. Occasionally hospitalisation may be necessary, especially when the person with the disorder is a threat either to himself or someone else.

Medical compliance and psychotherapy imperative
Medical compliance is critical to managing the illness. Once better, patients or relatives often decide to withdraw medications and the patient usually relapses. “It is mandatory for first incident medical treatment to carry on for at least a period of nine months to a year after stability to reduce the possibility of a relapse,” stresses Dr Chavda. Psychotherapy is an important part of the treatment process helping individuals deal with thoughts, feelings and behaviours causing problems, besides addressing medical compliance and self-image issues.