Meet the boy who looks like an old man

Shreyash Barmate, who suffers from progeria, refuses to be held back by condition and even drives a car. 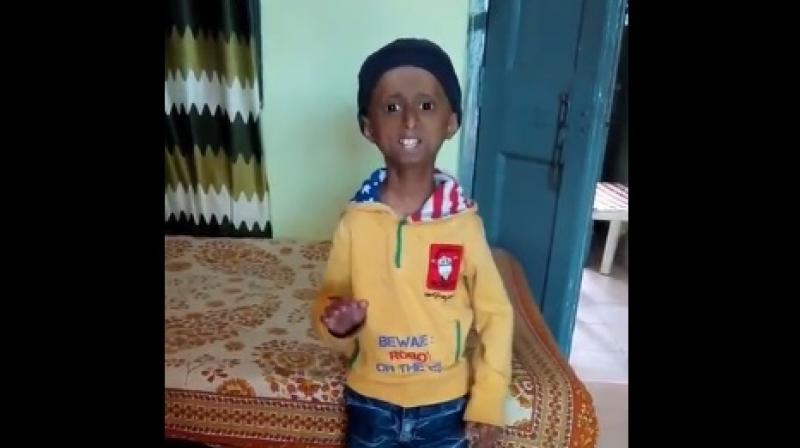 Doctor Girish Budhrani, the family’s paediatrician says that despite the rare medical condition, Shreyash is an energetic and positive boy. Shreyash wants to be a singer. (Photo: Youtube screengrab)

The 11-year-old from Madhya Pradesh has progeria, a condition which ages the body around eight times faster than normal.

Shreyash Barmate, however, refuses to let it bring him down. The condition leaves Shreyash suffering from baldness, heavy wrinkles and weakened limbs.

The condition, according to The Progeria Research Foundation is so rare that it only affects 1 in 20 million people.

The average lifespan for children with progeria is 14 and most of them die from a heart condition called arteriosclerosis, which usually affects adults over the age of 60.

But despite the odds being stacked up against him, Shreyash has a positive outlook in life. He plays instruments, sings, rides bikes and as he says, he drives a car as well.

Talking to The Sun, he says, “I know I have a condition called progeria but I am okay with it. It’s not coming in my way at all. This condition is not affecting my dream of becoming a singer.”

Shreyash has an older brother and a twin, both of whom are unaffected by the condition.

While progeria is caused by a genetic mutation, experts do not believe it is hereditary.

Arvind Barmate, Shreyash’s dad says his son started developing marks all over his body when he was two. According to him Shreyash might have progeria but he never lets others feel that he has some disease. He always spends his time playing and singing.

Doctor Girish Budhrani, the family’s paediatrician says that despite the rare medical condition, Shreyash is an energetic and positive boy.

Shreyash wants to be a singer.