Life   Health  08 Feb 2018  Find out what just one cigarette does to your body
Life, Health

Find out what just one cigarette does to your body

From stomach ache to ear infection, we list the effects of smoking on human body. 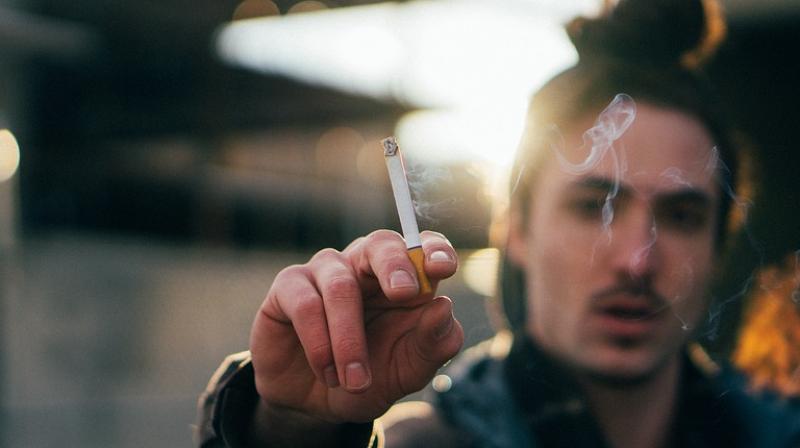 Just one cigarette can instantly stuff up the sinuses and sting the stomach and drive spikes in a person's heart rate and blood pressure. (Photo: Pixabay)

While it is a truth universally acknowledged that cigarette smoking is injurious to health (Its even written on the packets), it turns out that the first drag of a cigarette not only starts a person down a road full of chronic disease risks but also can cause immediate symptoms smokers may not even realize come from indulging the vice.

According to experts, just one cigarette can instantly stuff up the sinuses and sting the stomach and drive spikes in a person's heart rate and blood pressure.

What is more shocking is that even the brain gets an instant, addicting hit and goes into withdrawals in seconds.

Here’s what happens to each part of the body after just one puff.

First puff of smoke can cause asthma: Smoking basically simulates asthma for those that did not inherit the condition. The primary symptoms of asthma are bronchospasms, which happen when the muscles lining the airways suddenly tighten up. This can lead to shortness of breath and fits of wheezing and gasping in both asthma-sufferers and even first-time smokers.

As smoke travels deeper into the lungs, it continues to wreak instant havoc. In fact, mucus in the lungs works to trap anything that doesn’t belong there, including smoke and other toxins, but too much of the thick fluid can make breathing even more difficult by coating and blocking the small airways within the lungs.

While cilia usually clear this mucus away, but smoke paralyzes these natural filters almost instantly and for the rest of the day.

Smoking makes the heart work harder instantly: As soon as a person takes a drag, smoke starts to interfere the way that fat builds up and gets broken down in the body. At the same time the heart may start to race and have to work harder.

Nicotine impairs the ability of the body to break down low-density lipoproteins (LDLs) properly, so these ‘bad’ fats drift around more freely in the bloodstream where they can clump together and cause plaques to form in vessels.

Even a little nicotine instantly spurs acid and disturb the stomach: Smoking can induce acid reflux almost instantly. Nicotine reduces the protective coating of the stomach while increasing the amount of acid the organ produces. Smokers’ stomachs still produce this base, but nicotine and smoke make it less basic, cutting back its neutralizing effects and leading to acid reflux.

While stomach is busy churning out acid, it also less able to absorb micronutrients like vitamins C and E and folic acid. Shortages of these can quickly leave a person feeling weak and depressed.

Smoking stuff up nose and builds ear pressure: Sinuses are lined with the same kind of tiny hairs that keep the lungs clear of phlegm. Smoking affects them in exactly the same way, too. As soon as smoke reaches the nose, active hairs freeze up, allowing mucus to build in the sinuses, too, where it makes you vulnerable to infection and inflammation.

In turn, sniffles can develop quickly into a headache and dull sense of smell.

Withdrawals start before finishing cigarette: While smokers claim that a cigarette break calms them down and relaxes them, researchers show that smoking itself does exactly the opposite to the brain. Nicotine hits the brain very quickly, and momentarily soothes areas that control our emotions, sense of direction and abilities to plan.

But the ‘high’ only lasts a few seconds. When it is over, the brain is left in an immediate, mild form of withdrawal which comes with a feeling of anxiety.