Tread with caution in hospitals 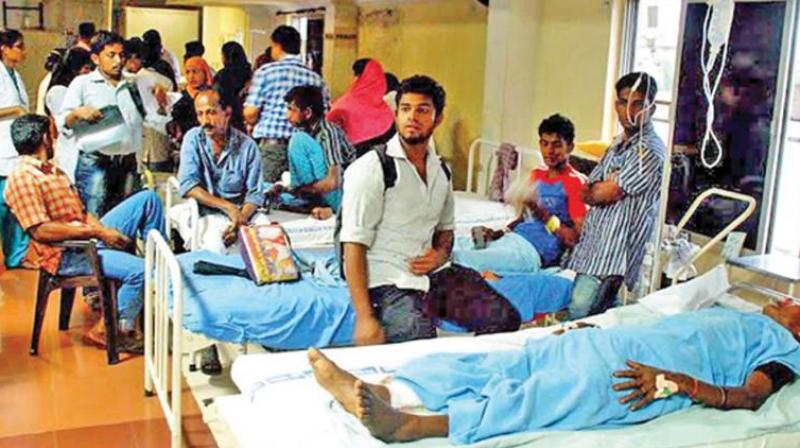 It’s a fact of life: People checking into hospital face risks. Expecting to get better, some actually wind up getting worse. We examine the risks involved in being around hospitals in the wake of the freak accident where the person accompanying a patient during an MRI examination at a Mumbai hospital.

The accidental death of a person, accompanying a patient for an MRI examination to a Mumbai hospital, reveals the fact that hospitals are places to tread with caution than rush in foolishly. People checking into hospital face risks. Expecting to get better, some actually wind up getting worse. Hospitals have many unique hazards that can potentially affect the health of patients and visitors. Hazards include biological (viruses and bacteria), chemical and physical hazards, hazardous drugs and ionizing and non-ionizing radiation. Patients and bystanders at a hospital, often for the first time, are totally lost. They are ill, anxious and tense. Hospitals should have adequate sign boards and staff to guide people and have “Hazard” and “Do Not Enter” signs in areas potentially dangerous.

Many times minor accidents occur at the entry point to hospital. The driver of the emergency vehicle may be so engrossed in reaching the patient to the casualty that he might not notice pedestrians, two-wheelers and other vehicles. In the hurry to transfer the patient from the vehicle to the emergency department, attendants can slip, fall or hurt themselves (or even the patient). Often many people accompany a patient making it difficult for others, especially doctors and nurses, to move about. Often children tag along. They might wander and get lost; or might get caught in a lift, slip off the stairs or ramp; or might wander into hazardous areas and get into trouble. Visit patients only at prescribed times. Whole families visit the patient as if they are on a picnic! Imagine the impact on other, especially the very sick with cancer, heart or kidney failure. Mind you, bystanders are exposing themselves to hazards of hospital-acquired illnesses!

Blood-borne pathogens
Blood-borne microorganisms transmit disease by contact with blood. Contact may be direct, such as needle-sticks or splashes of blood-containing fluids to the mucous membranes or open wounds, or indirect, such as when surfaces contaminated with blood come in contact with someone’s mucous membranes or abraded skin. The most common blood-borne risks are Hepatitis B (HBV), Hepatitis C (HCV), and Human Immunodeficiency Virus (HIV) infections. HBV can cause persistent infections, liver failure and liver cancer in the long term.

In acute illness, it causes fever and jaundice and, rarely, acute liver failure. HCV infections rarely cause acute illness, but most of those infected will develop chronic infection and 10-15 percent will develop cirrhosis and liver failure. HIV infection may cause an initial infection with flu-like symptoms. Without treatment, HIV progresses to Acquired Immune Deficiency Syndrome (AIDS), which damages the immune system. The patient and attendant should know of these hazards and avoid getting accidentally infected. Avoid going to infectious diseases wards. Do not walk barefoot in hospital as there may be some blood or body fluid on the floor. A wound on the leg can expose the person to the infection. Avoid touching areas where body fluid samples are collected and kept. If by chance one comes in contact with these, inform the infection control officer of the hospital at the earliest.

Methicillin-resistant staphylococcus aureus (MRSA)
Staphylococcus aureus (S aureus) is a human pathogen, causing a wide range of infections from mild skin and soft tissue infections to severe blood infection. It is also found on the skin and in the nose of healthy individuals. S aureus strains which are resistant to the antibiotic methicillin and other antimicrobials are increasingly prevalent in hospital environment and are responsible for increased mortality in hospital inpatients. Their importance is due to the fact that they are more difficult to treat with typical antibiotics. MRSA can be contracted from patients and thus can be hazardous to the patient’s attendant.

A person can get MRSA by contact with his/her own nasal bacteria, by contact with an infected person’s sore, or by contact with a carrier who is colonized, but has no symptoms. Hands are the most important means of transmitting infection. Objects such as clothing, equipment, and furniture can be involved in transmission. Patients and attendants must frequently wash hands.

Tuberculosis
Mycobacterium tuberculosis is a bacterium that causes tuberculosis (TB). It is transmitted through airborne particles called droplet nuclei which are formed when individuals with pulmonary TB cough, sneeze, shout or sing. Droplets are very small and remain airborne for prolonged spells, spreading throughout hospital. Individuals suffering from HIV, diabetes, under-nutrition and vitamin deficiencies, and end-stage kidney failure are at a higher risk for developing tuberculosis. Alcoholism, corticosteroid therapy, malignancy and genetic susceptibility are other risk factors associated with tuberculosis. It is very important for patients and other people visiting the hospital to be aware of this and stay away from individuals who have cough.

Medical waste
It generally includes cultures and stocks of infectious agents (discarded culture dishes), liquid human and animal waste, materials stained with blood or body fluids, pathological waste (i.e., tissues or organs) and used sharps. Other waste streams generated by hospitals, such as discarded personal protective equipment (masks, surgical gowns), excess prescription medication, chemical wastes, and radioactive materials may have adverse effects on both people and the environment. Usually these are discarded in appropriate places by the hospital staff. However, there is always a risk of an individual coming in contact with this when he accidentally wanders into these areas.

Chemical hazards Cleaning agents
Although hospital environmental service workers and housekeeping staff are at highest risk of exposure, patients, visitors and other hospital staff also can be exposed. Accidental exposures to large concentrations can occur through spills or during mixing of incompatible chemicals. Primary routes of exposure to cleaning agents are inhalation of aerosolized droplets or vapors and skin exposure. Several cleaning agents are known sensitizers and can lead to dermatitis upon repeated skin exposure. The patient and the attendant should stay away from areas (whenever possible) where cleaning is going on. This will help keep the hospital environment clean as well as prevent exposure to chemicals.

Mercury
Mercury is primarily used in thermometers and blood pressure machines where it is present as metallic mercury. It is also found in dental clinics; in laboratory chemicals; in pharmaceutical products; as contaminants of cleaning products formed in the manufacture of certain ingredients; in batteries; in fluorescent, high-intensity-discharge and ultraviolet lamps; in electrical switches and relays; and as waste in plumbing. Metallic mercury and other forms of mercury can be inhaled or absorbed through the skin. Exposure is possible when mercury is spilled, during improper cleaning of a spill, during the maintenance of mercury-containing equipment, when mercury is transferred, or from inadequate ventilation to control vapor from sources and from past spills.

The nervous system is very sensitive to all forms of mercury. Metallic mercury vapors are more harmful than other forms found in hospitals, because more mercury reaches the brain. The primary long-term effects from exposure to high levels of metallic, inorganic, or organic mercury are permanent damage to the brain, kidneys, the lining of the mouth and lungs, and the developing fetus. Mercuric chloride, used in some laboratory solutions, can cause cancers. Avoid touching or playing with mercury thermometers and BP apparatuses.

Patients and attendants want to get things done very fast and rush from one place to another. Ideally different floor surfaces (sanitary room, wards and units, operating theaters, kitchens, corridors and stairs) require different types of flooring. In their anxiety, many people slip and fall, injuring themselves.

Stairways require handrails, slip-resistant coating for steps, high visibility (clear of obstructions), nonslip markings for edges of steps and adequate illumination. Ramps should be well marked with appropriate signs. One should take care while using the ramp especially at turnings where the floor may be at an angle. While being shifted on a wheelchair or trolley, care must be taken to prevent the patient slipping off the wheelchair of trolley at these areas and causing more injury.

Aerosolized medications
Aerosolized delivery of medications has an advantage to the patient of direct delivery to the target organ, the respiratory tract, rather than indirectly via the mouth or as injections. Medications for asthma such as bronchodilators and inhaled corticosteroids are the most commonly used. Aerosolized mucolytics (mucous thinning drugs) and antibiotics have been used to treat chronic lung infections.

These medications may be administered by a respiratory therapist, nurse, physician or other healthcare workers, or rarely with the help of the patient’s attendant. Sometimes, if careless, the person administrating the medicine may be exposed to the same. Patient attendant administering aerosolized medications may have cumulative dosing of the same agent. The potential side effects of the various aerosolized agents are diverse, depending on the medication. Examples of potential side-effects range from stimulation of the nervous system to constricting blood vessels, to suppressing immunity. Repeated exposure to antibiotics could trigger drug-resistant strains, or possible allergic reaction.

Ionizing radiation is atomic particles or electromagnetic waves that possess enough energy to produce ions, or charged particles, when interacting with matter. Radiation cannot be seen, tasted, or smelled. The hazard level of radiation depends on the activity, energy, and the type of radiation. In hospitals, ionizing radiation is used in diagnostic and therapeutic procedures. It is produced either by a machine, such as an X-ray machine, or from radio-nuclides, which are unstable elements (or isotopes) that emit ionizing radiation as they decay.

Ionizing radiation may cause different types of cancer (including stomach, liver, colon, lung, breast, uterine and thyroid cancer and leukemia). High radiation exposures can also damage blood and tissues, including the heart, eyes, intestine, skin, and reproductive organs, depending on the type of radiation, the route of absorption, and its potency. Visitors to hospital (especially pregnant women) should avoid going to areas where there is risk of exposure to ionizing radiation.