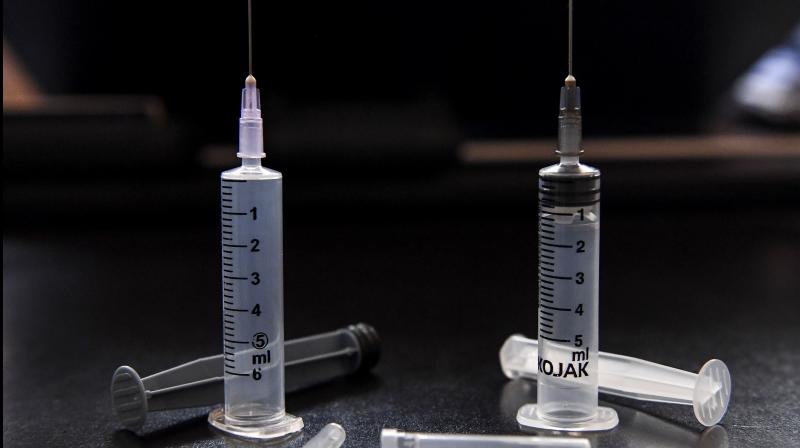 In this photo illustration, a syringe is displayed at the Hindustan Syringes factory in Faridabad. - India's biggest syringe manufacturer is ramping up its production to churn out a billion units, anticipating a surge in demand as the global race to find a COVID-19 coronavirus vaccine heats up.— AFP

Amid reports that the Oxford vaccine has been paused after one of the volunteers fell ill, the Serum Institute of India (SII), which is conducting the Oxford COVID-19 vaccine trials in India, clarified that the trials will continue in the country. “We cannot comment much about the UK trials but we have not faced any issue in India and the trials are continuing,” the company said on Wednesday.

The SII has been issued a show cause notice by Indian drug controller DCGI after one volunteer reported unwell in UK. Already trials for the vaccine have been stopped in four nations — Brazil, UK, US and South Africa — as a precautionary measure.

In his notice, the DCGI has asked why the SII has not submitted the report related to the incident in UK and why it is progressing with the trial instead of pausing it.

India on Wednesday recorded 89, 706 fresh cases of novel coronavirus pushing the country's overall tally to 43.70 lakh. In one day 1, 115 deaths took place taking overall fatalities due to the virus to 73, 890.

Apart from Maharashtra, Andhra Pradesh, Karnataka, Tamil Nadu that continue to register high cases, the national capital Delhi, where COVID-19 cases had come down substantially last month, has now started witnessing a fresh wave of high cases. Delhi on Wednesday recorded 4,039 fresh cases, which was the highest single-day spike in the city so far taking its overall tally over 2 lakh and death count 4,638.

Union health ministry officials said India has progressively maintained a low Case Fatality Rate which was 1.7% on Wednesday, compared to the global average of 3.28%. “The aim is to achieve a national CFR of less than 1%. There are 17 States/UTs that are even today reporting mortality figures lower than 1%,” officials said.

The health ministry said that in the last 24 hours, India has scaled a new high of recoveries as the total number of recovered patients in a single day surged to a record 74,894. With this, the total number of recoveries has touched almost 34 lakh taking the Recovery Rate to 77.77%. Giving out the details, officials said 60% of the new cases are reported from only 5 states out of which Maharashtra has alone contributed more than 20,000 and Andhra Pradesh has contributed more than 10,000 recoveries.