The study's author says the findings clarify that the benefits of dog ownership stems from having dogs. 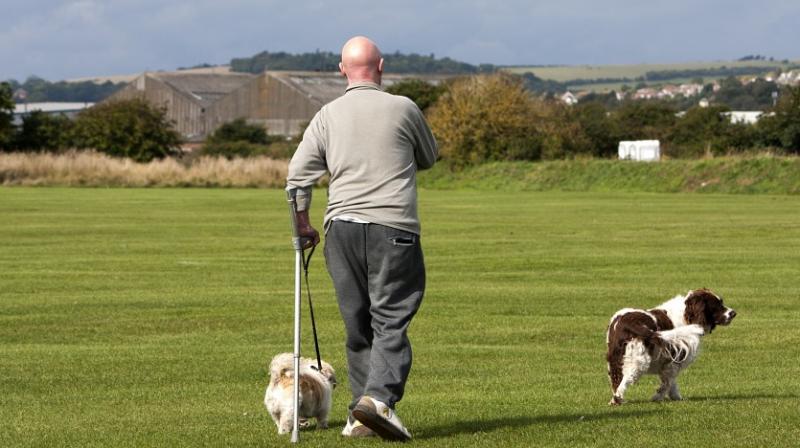 Participants for the study wore monitors that measured their movements for three one-week periods over the course of a year. (Photo: Pixabay)

Senior citizens who live with dogs appear to meet internationally recognized exercise goals just by walking them, a new study suggests. Researchers matched 43 older adults with dogs to another 43 without dogs and measured their time spent walking. Compared to those without canine companions, dog owners walked on average 23 minutes more a day - enough to meet U.S. and international exercise recommendations for substantial health benefits, the research found.

“It’s very difficult to find any other intervention that produces this size of effect,” said senior author Dr. Daniel Simon Mills, a professor of veterinary behavioral medicine at the University of Lincoln in England. “It’s good evidence that dog ownership amongst the elderly increases physical activity in a meaningful and healthy way,” he said in a video call.

Participants in the study were 65 to 81 years old, lived independently in one of three counties in England and wore monitors that measured their movements for three one-week periods over the course of a year. The time periods were designed to capture participants’ steps in different seasons and under varied weather conditions, researchers reported in BioMed Central Public Health.

Dog owners and participants who did not own dogs were matched by gender, height, weight, health conditions and walking abilities. All were white British, and nearly two-thirds were women. The average participant was at least slightly overweight. The average dog in the study was nearly eight years old. Dog owners walked on average 21 minutes more than those without dogs at an at-least moderate pace, the study found. “Virtually all of the increased exercise is not just dawdling,” Mills said. “It’s marching.”

Over the course of a week, the additional 147 minutes dog owners spent walking at a moderate pace would in itself be just three minutes shy of World Health Organization (WHO) recommendations of at least 150 minutes of moderate to vigorous weekly physical activity, the study authors note. The U.S. Centers for Disease Control and Prevention recommends that adults do a minimum of 150 minutes a week of moderate-intensity exercise or 75 minutes of vigorous-intensity aerobic activity a week.

By matching dog owners to people without dogs, Mills said he believes the new study clarifies that the benefits of dog ownership stem from having dogs, rather than from dog owners being more active in the first place. But Marcia Stefanick, a professor at the Stanford University School of Medicine in California, hesitated to ascribe all the benefits to the dogs.

“Despite ‘successful matching’ on what the authors consider key variables, a person who is ready and willing to walk a dog at least twice a day is more likely to get a dog than one who sees that commitment as too challenging,” said Stefanick, who researches disease prevention and was not involved in the study. “On the other hand, once a person has a dog, the motivation and likelihood that he or she would at least walk around the block, with several stops along the way, would clearly be higher,” she said in an email.

The study confirms previous studies in which dog owners reported walking more than people without dogs. It also shows that the additional walking was at a moderate clip. “We saw a big increase in healthy activity and at a level that is considered to be health promoting,” Mills said. “If you’d like to get a dog, don’t be put off by the fact you’re elderly,” he said. “It’s good for the dog, and it’s good for you.”