The symptoms are diarrhoea, fever, stomach cramps, and vomiting. 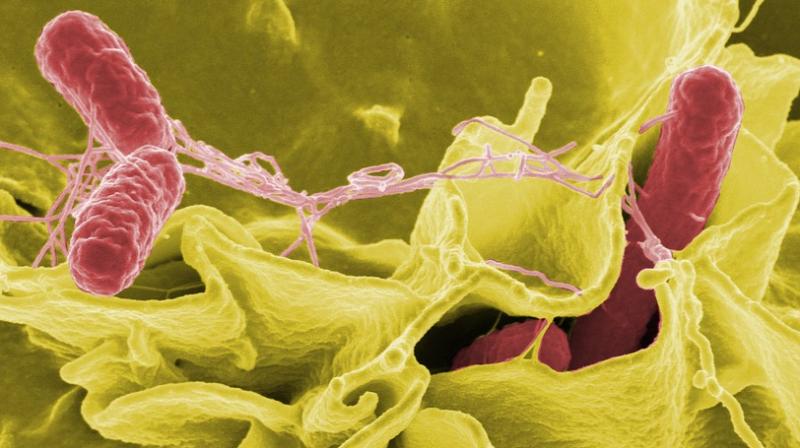 Majority of the strains of salmonella – a bacteria that causes foodborne diseases – are resistant to different classes of antibiotics, scientists say.

Researchers from University of Sao Paulo in Brazil sequenced and investigated the genomes of 90 strains of a specific serovar of salmonella enterica known as S Typhimurium. The 90 strains were isolated between 1983 and 2013.

They provide a portrait of the epidemiology of salmonellosis in Brazil in the last 30 years, coming from all regions of the country and having been collected from patients with foodborne infections or from contaminated food such as poultry, pork, or lettuce and other vegetables.

When the action of antibiotics in each of the 90 strains was tested, it was discovered that the vast majority were resistant to different classes of antibiotics that are part of the arsenal of medicine. The study, published in the journal PLOS ONE, also identified 39 genes responsible for resistance to antibiotics.

Salmonella comprises two species, S bongori and S enterica. The latter is the type species, with a large number of subspecies and serovars that cause more foodborne infections than any other species in Brazil and worldwide.

The human and animal intestinal tract is the main natural reservoir for this pathogen, with poultry, pork and related food products serving as major transmission vectors. The six subspecies of S enterica are subdivided into 2,600 serovars.

A serovar (short for serological variant) is a distinct variation within a species of bacteria or virus characterized by having the same number of specific surface antigens.

The most important subspecies of S enterica from the epidemiological standpoint is S enterica subspecies enterica, which causes the foodborne infection known as salmonellosis.

The symptoms are diarrhoea, fever, stomach cramps, and vomiting. Scientists measured antibiotic resistance in each of the 90 strains. According to the study, 65 (72.2 per cent) of the strains proved resistant to sulfonamides, 44 (48.9 per cent) to streptomycin, 27 (30 per cent) to tetracycline, 21 (23.3 per cent) to gentamicin and seven (7.8 per cent) to ceftriaxone, a cephalosporin antibiotic.

“The key finding of this research is the discovery of a large number of resistance genes in the samples, considering that they were isolated from humans and food,” said Fernanda Almeida from University of Sao Paulo.