Both men and women are equally prone to heart attacks, yet women frequently remain undiagnosed and untreated for a host of reasons. 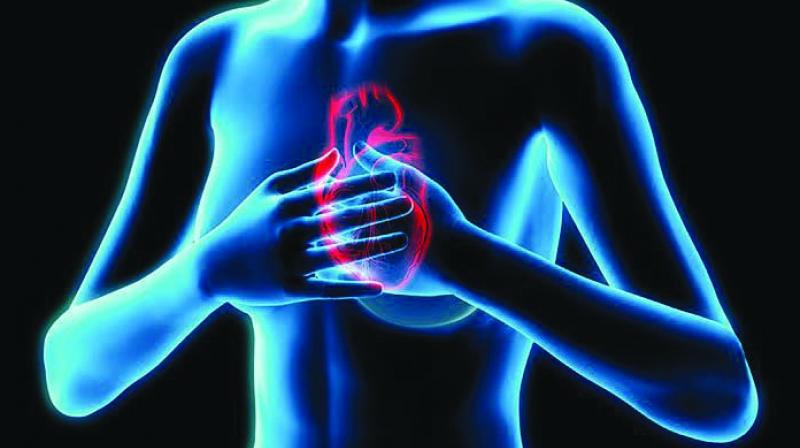 In women, abdominal obesity is commonly seen post-childbirth and mostly in the pre-and post-menopause stage.

Women who have larger waists compared to their hips or have a typically apple-shaped body are at a greater risk for heart attacks than men who have a similar shape, according to a study published in the Journal of the American Heart Association. The waist-to-hip ratio is taken as a predictor for health similar to body mass index, and research has found that WHR is a better predictor for risk of heart attacks than BMI or other obesity parameters.

The study finds that WHR is a better predictor than BMI to identify the risk of a heart attack in women. Does that help at the clinical level?
The waist-hip-ratio is one of the markers among the various other parameters that we have. At the clinical level, after evaluation, we mostly advice the treadmill test. In this test too, we frequently encounter false positives among women in the age group of 40 to 60 years. A false positive means that the test is abnormal and indicates some blockage but when we take them for an angiogram, it is found that there are no blocks.

Abdominal obesity is a risk factor in both genders. Do the symptoms of a heart attack present differently in women as compared to men?
Obesity in Indian men and women is very different from that in the West. The obesity seen here is more in the hip and the abdominal regions. The fat deposits are found more in these areas in both men and women. The symptoms in men are usually found 10 years earlier than in women. Indians also have a syndrome X which means a combination of high triglycerides, abdominal obesity and diabetes.

In women, the presentation of symptoms for an impending heart attack can be confusing. They generally don’t present with chest pain but show shortness of breath, severe fatigue and uneasiness. Often at a clinical level, we have found that women are not able to explain what they are going through. They spend at least 36 to 48 hours at home before coming to a tertiary center for care. By then, the heart attack has already evolved and hence, even after aggressive treatment, they take time to recover.

In women, abdominal obesity is commonly seen post-childbirth and mostly in the pre-and post-menopause stage. If there are co-morbid conditions like diabetes, hypertension and other metabolic disorders, then there is an increased risk of cardiovascular disease.

What are the risk factors which contribute to abdominal obesity and culminate into cardiovascular diseases?
The risk factors in present times include sedentary lifestyles, consumption of junk food and psychosocial stress, which sometimes show in people as young as 30 years of age. The strain of maintaining a social strata and living the high life causes a great deal of stress, leading to a greater incidence of heart attacks. In these cases, hormones are not the problem. We are now getting younger patients, both men and women, for whom psychosocial stress is a major parameter for heart attacks.

What is the incidence of heart attacks in India vis-a-vis men and women?
According to the World Health Organisation, the mortality rates for cardiovascular diseases in men and women are 349 and 265 per 1,00,000 population in India. The ratio is 60:40 in men and women for every 100 patients.

How can the risk factors in women and men be controlled?
There is a strong need to understand that women can also have heart problems. This has often not been understood well at the family and community level. Hence, awareness has to be created that they too have high stress levels, metabolic disorders, hypertension and diabetes. While men get their regular checkups done, women are often in the second priority list and that has to change. Often, we find cases where women were suffering from advanced forms of diseases and their treatment was not up to the mark, which ultimately lead to fatal heart attacks. Preventive methods include eating a balanced diet, avoiding junk food, giving up smoking, monitoring lipids and sufficient physical exercise. De-stressing yourself is an equally important factor in the present times.