If baby is below 2.5 kg it would considered underweight and above 3 kg would be termed overweight. 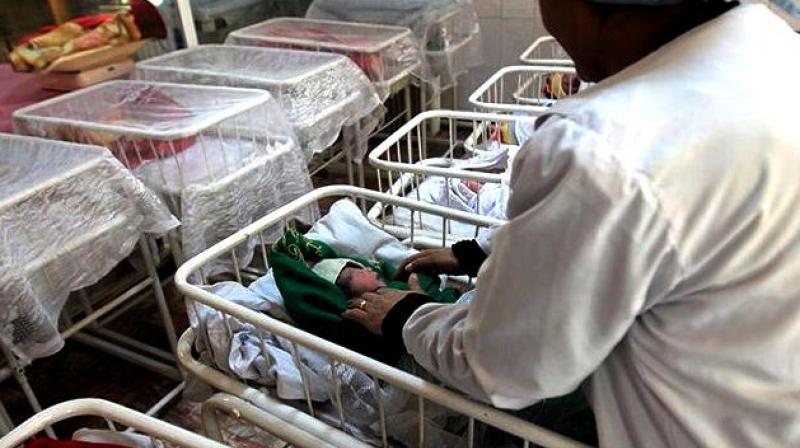 Three out of four are boys and one is a girl child (Photo: AFP)

Dhanbad: A woman gave birthto quadruplet (four children) at a private hospital in Dhanbad district. Kunti Rawani (25), a resident of Chandanquari area of Bokaro was admitted at Laxmi Narayan Seva Sadan Hospital at Bhaga yesterday afternoon and in the evening she gave birth to the quadruplets.

Doctors of the hospital P B Mandal and Shekhar Kumar said the health condition of the mother and her four children was normal but the four babies are underweight. All the four babies have been kept under observation and if needed they could be referred to Bokaro General Hospital (BGH).

Three out of four are boys and one is a girl child. Their weights were recorded as 1.300 kg, 1.200 kg 1.050 kg respectively and the girl child weighed 1.150 kg. According to Patliputra Medical College Hospital (PMCH) Gynaecology Head of the Department, Dr Pratibha Roy, normal weight of baby at the time of birth should be 2.5 kg to 3 kg.

"If baby is below 2.5 kg it would considered underweight and above 3 kg would be termed overweight. Since all four are underweight they are premature," she said.

The doctors became surprised to find the woman in labour pain after delivery of the first child. "It was shocking that the doctors of health centre who were monitoring her right from pregnancy stage could not detect abnormality," Mondal said.

Kunti Rawani's husband is a labourer. Manoj said "we have been trying to have a child for last four years after marriage. Now god has given us four."