Here's why donuts are so addictive

Study says junk foods high in both fat and carbs confuse the brain, triggering an urge to overeat. 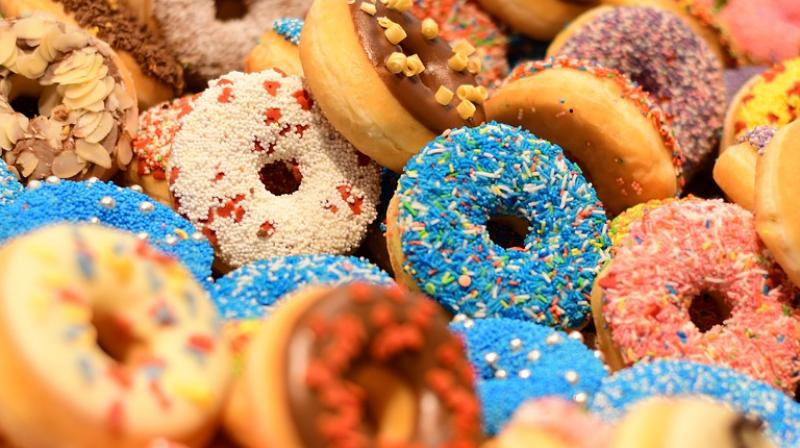 The Yale University finding sheds light on how the processed food industry cashes in on the human craving for unhealthy diets. (Photo: Pixabay)

A new study now shows that foods that combine both fats and carbohydrates like donuts trick us into thinking they have more nutrients than they do, leading to over-eating.

Highly processed foods often consist of carbs cooked in fat and coated in or flavored with sugar and are newer than that regulation mechanism in our heads, and confuse the reward system that tells us what we should be eating.

The study says that the foods have stronger effects on the brains reward system, leading people to over-eat and choose junk food over healthier snacks.

The research was carried out by the Yale University.

The Yale University finding sheds light on how the processed food industry cashes in on the human craving for unhealthy diets.

The study says that if you ever crave a banana instead of chips to accompany your sandwich at lunch, then you brain is making sure you get the nutrients you need at work.

But modern highly-processed foods contain more combined fats and carbohydrates than our brain knows what to do with.

So the system that would normally tell us to choose a potassium-rich banana over potato chips instead gives the green light for heavy but nutrient-poor foods.

The findings, published in the journal Cell Metabolism, support the idea these kinds of foods hijack our body's inborn signals governing consumption.

According to author of the study Dr Small, the biological process that regulates the association of foods with their nutritional value evolved to carefully define the value of a food so organisms can make adaptive decisions.

But processed foods such as doughnuts, which could contain 11 grams of fat and 17 grams of carbohydrate, have only been around for 150 years, not long enough for us to evolve a new brain response to them.