Floods, cyclones, droughts and heat waves — our climate is changing and taking a toll on our lives. 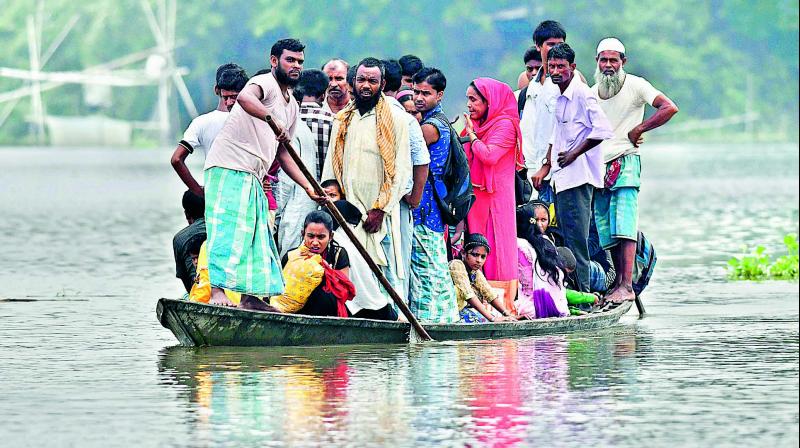 Survivors of natural disasters are at the risk of PTSD and other mental health issues. (Pictures used for representational purposes only)

Climate change impacts not only our physical health but also our mental health with anxiety, post-traumatic disorders and depression setting in people who have suffered from floods, cyclonic storms and heat waves. A recent study, published in the journal of Proceedings of the National Academy of Sciences, has collected data of over a decade and compared it with the sudden climate change and heat waves to understand its impact.

The research has found that warming temperatures and natural disasters have impacted mental health, with increased levels of anger, resentment and guilt among the survivors who felt helpless after the devastation. Most of the survivors have acute levels of stress and there are incidences of self-harm and suicide in people who have faced the wrath of climate change and destruction, explains Dr I. Bharat Kumar Reddy, a senior consultant psychiatrist at Apollo Hospitals.

Q What is the impact of climate change on mental health?

Climate changes impacts mental health both directly and indirectly. The direct impact is the exposure to trauma and solastalgia. Solastalgia is the distress that is produced by environmental change where the impact is directly related to their home environment. This is often seen in the case of floods, where there is major destruction and people have lost their belongings and the things they loved the most.

It is also seen during droughts when there is no crop and the land is barren, and people get into a major depressive episode. These aspects of climate change indirectly affect the individuals’ physical health and also impact the well-being of the community as a whole.

Q Which are the most vulnerable groups that must be cared for?

The most vulnerable are children, the elderly and pregnant women, who must be given priority. When pregnant women are exposed to floods, heat waves and extreme colds, there is not only a physical impact on their body but mentally too. There have been cases of perinatal depression and postpartum psychosis. With increasing instances of climate change being seen, it is important to have a public health initiative to educate people regarding the adverse effects of climate change on both physical and mental health.

Q What must be the coping mechanisms in place at least at the individual level?

Large-scale public and community level participation is required, as lives have to be restarted, proper physical care provided on time to prevent long-term disability and people have to be taught how to cope with calamities positively.

Those who are positive are able to deal with the trauma in a much better way, as they look forward to life. Those who are negative, go into severe depression and require intervention in terms of therapy and medication.

Q Do the alerts issued by the weather department help in handling the situation in terms of mental preparedness? If so, how must one do so?

Prior alerts from the weather department do help but often the magnitude of an event cannot be translated in an alert. With various events which have been reoccurring over the years, there is an intimation that it could worsen preparing oneself would help. The actual extent is only seen and observed once the event occurs, along with the reaction of the community and society as a whole.

Q It is stated that climate change of even a degree, increases stress levels and is a source of worry in people?

Yes, even a one degree rise in temperature can cause stress and worry among people. It leads to confusion and panic, and people struggle as they are not clear what is going to happen next. The events have been devastating and there has been mass loss which can leave an individual shattered.

Women are found to have more mental health issues, as they find themselves completely lost after the calamity. There have been issues of sleeplessness which have been noted due to warmer temperatures impacting the physical body and also leading to major mood swings.

Q What has been noted about the survivors in terms of mental health?

The coping mechanism of survivors depends on their reaction to the acute stress. Some of them are able to rebuild their lives, whereas others indulge in self-harm and even attempt suicide. Those who have lost many of their near and dear ones often show anger and resentment. There is also a sense of disparity and a feeling of guilt.