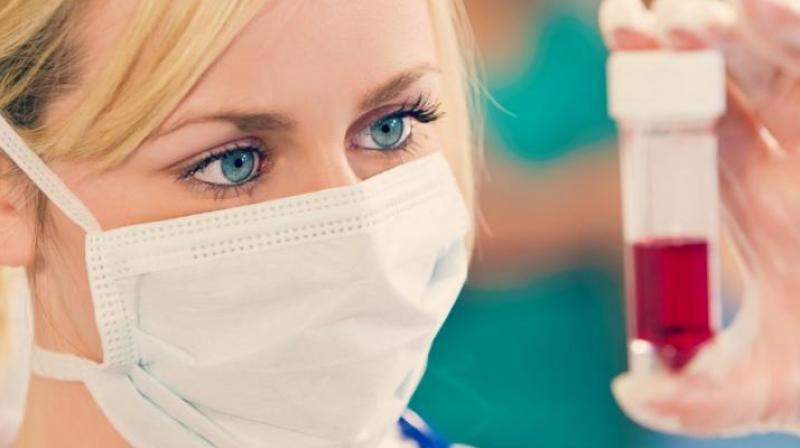 This is the first physiological diagnostic and it's highly accurate and specific (Photo: AFP)

Washington: A simple blood test that could detect autism in children has come closer to reality.

An algorithm based on levels of metabolites found in a blood sample can accurately predict whether a child is on the Autism spectrum of disorder (ASD), based upon a recent study.

The algorithm, developed by researchers at Rensselaer Polytechnic Institute, is the first physiological test for autism and opens the door to earlier diagnosis and potential future development of therapeutics.

Big data techniques applied to biomedical data found different patterns in metabolites relevant to two connected cellular pathways (a series of interactions between molecules that control cell function) that have been hypothesized to be linked to ASD: the methionine cycle and the transulfuration pathway. The methionine cycle is linked to several cellular functions, including DNA methylation and epigenetics, and the transulfuration pathway results in the production of the antioxidant glutathione, decreasing oxidative stress.

In the study, Hahn described an application of Fisher Discriminant Analysis - a big data analysis technique - to data from a group of 149 people, about half on the Autism spectrum. Deliberately omitting data from one of the individuals in the group, Hahn subjected the dataset to advanced analysis techniques, and uses the results to generate a predictive algorithm. The algorithm then makes a prediction about the data from the omitted individual.

Hahn cross-validated the results,swapping a different individual out of the group and repeating the process for all 149 participants. His method correctly identified 96.1 percent of all neurotypical participants and 97.6 percent of the ASD cohort.

"Because we did everything possible to make the model independent of the data, I am very optimistic we will be able to replicate our results with a different cohort," said Hahn. "This is the first physiological diagnostic and it's highly accurate and specific."

Researchers have looked at individual metabolites produced by the methionine cycle and the transulfuration pathways and found possible links with ASD, but the correlation has been inconclusive. Hahn said the more sophisticated techniques he applied revealed patterns that would not have been apparent with earlier efforts.

"A lot of studies have looked at one biomarker, one metabolite, one gene, and have found some differences, but most of the time those differences weren't statistically significant or the results could not be reliably replicated," Hahn said. "Our contribution is using big data techniques that are able to look at a suite of metabolites that have been correlated with ASD and make statistically a much stronger case." The study appears in PLOS Computational Biology.