Fever and an itchy, red rash might indicate chickenpox

Senior GP Dr.Hari Kishan Boorugu shares his valuable insight pertaining to the disease with us. 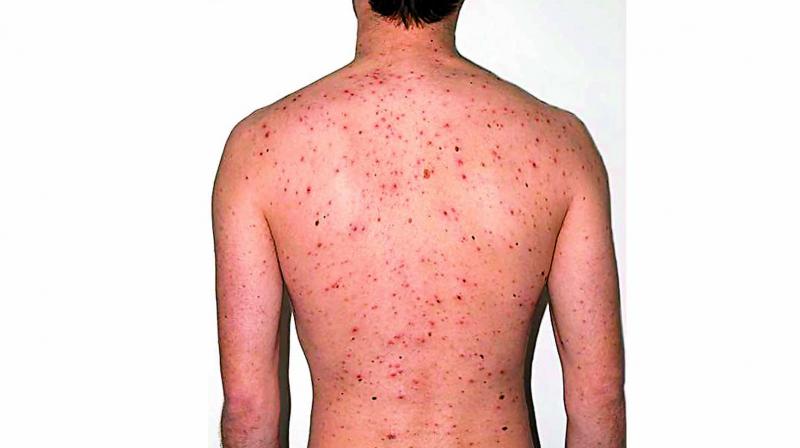 The combination of extreme heat and humid conditions are the major reasons for chicken pox.

The combination of extreme heat and humid conditions are the major reasons for chicken pox. A highly contagious disease seen mostly in children chicken pox is an infection that causes blister like rash on the face and body and spreads throughout the body. It is mostly seen in children and the severity depends on whether the child has been vaccinated or not explained Dr Hari Kishan Boorugu, senior general physician at Apollo Hospitals.

Q Do fluctuating temperatures cause the outbreak of chicken pox during the summer?

The outbreak of chicken pox is witnessed mostly during periods of hot and humid weather. Therefore, there is an increase in its incidence from March to May.

It’s a viral infection that causes a fever and an itchy red rash, which spreads all over the body. Although it is not life-threatening, complications can arise if not brought to the notice of a medical practitioner in time. It puts the patient at the risk of dehydration and in more serious cases, even brain fever.

Rashes appear on the belly, back, and face, and spread to almost every region in the body including hands, legs, mouth, scalp, and the genital area. It causes a tremendous amount of physical discomfort.

Q Although a vaccination for it is administered to children between the ages 3 and 5, some children still contract the disease. Why so?

Those who contract the disease might have received a single dose of the vaccination instead of the standard two doses. Such a patient might suffer a mild attack wherein the rash isn’t as severe and it isn’t as itchy, either. There have also been cases wherein despite receiving two doses of the vaccination, an individual still fell prey to the disease.

Q Chickenpox usually leaves marks on the skin after it subsides. How can those marks be treated?

The residual marks usually disappear completely with time. In some cases, however, the marks might not heal at all and in such cases, it is best to consult a skin specialist, who will ideally suggest creams for cosmetic benefits.

Q Approximately how many individuals miss the vaccination?

Earlier, in the pre-vaccination era, most cases of chickenpox were noted in children. Now, however, since most parents are proactively immunising their children against diseases like chicken pox, we are beginning to witness more cases of chickenpox in those adults who did not receive their shots as children.

In adults, however, the severity of the disease is very high, especially if one suffers from other diseases like diabetes, hypertension, or cardiovascular diseases. Such cases might call for specialist intervention.

Severe complications, however, are not so common in children as they are in adults. However, chickenpox is usually a self-resolving infection. The use of antiviral drugs like Aciclovir is recommended in adults to prevent serious complications.

Q When is it ideal to commence confinement? Since, it’s contagious, can it spread the disease to up to 10 people as rumoured?

Minimum seven days of isolation is required, sometimes longer. Essentially, the patient must be isolated until all the skin lesions form crusts and no more new active lesions are found. Isolation should start as soon as chicken pox is suspected. If one comes in contact with a patient suffering from the disease, then taking the chickenpox vaccine soon after has been shown to help in minimising the risk of contraction.

Q There are alternative remedies that people opt for, do they cause a delay in recovery?

The traditional method of applying neem leaves to the skin may worsen irritation caused by the lesions, which are already itchy and painful. Besides, that it works, is only a myth.

Q The marks left behind are a major concern and often take months and dermatological treatment to resolve. Why is that?

The marks on the body which eventually disappear completely in most cases.

However, it may take a long time and in some cases, marks may remain, which is not particularly harmful. In such cases, however, dermatologists prescribe can specific creams for the treatment.