They may be doing more harm than good to your body. 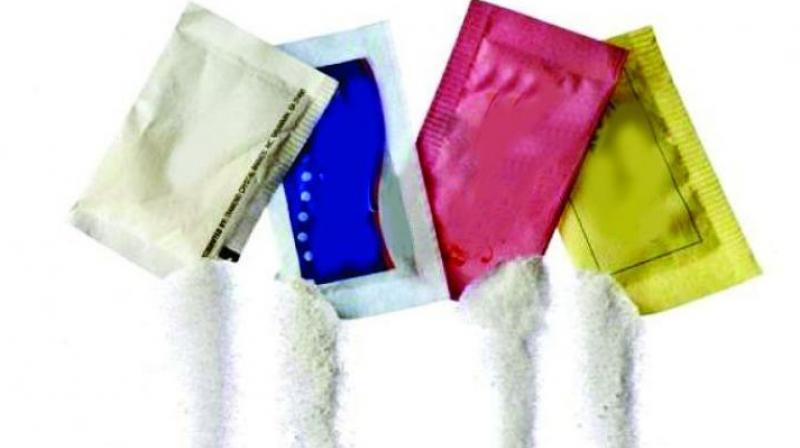 Toronto: Use of artificial sweeteners may be associated with weight gain and increased risk of obesity, diabetes, high blood pressure and heart disease, a study claims.

Consumption of artificial sweeteners, such as aspartame, sucralose and stevia, is widespread and increasing, according to researchers from the University of Manitoba in Canada. Emerging data indicate that artificial, or non-nutritive, sweeteners may have negative effects on metabolism, gut bacteria and appetite, although the evidence is conflicting.

To better understand whether consuming artificial sweeteners is associated with negative long-term effects on weight and heart disease, the researchers conducted a systematic review of 37 studies that followed over 4,00,000 people for an average of 10 years. Only seven of these studies were randomised controlled trials (the gold standard in clinical research), involving 1,003 people followed for six months on average.

"Despite the fact that millions of individuals routinely consume artificial sweeteners, relatively few patients have been included in clinical trials of these products," said Ryan Zarychanski, Assistant Professor at University of Manitoba. "We found that data from clinical trials do not clearly support the intended benefits of artificial sweeteners for weight management," Zarychanski said.

"Caution is warranted until the long-term health effects of artificial sweeteners are fully characterised," said Assistant Professor Meghan Azad. "Given the widespread and increasing use of artificial sweeteners, and the current epidemic of obesity and related diseases, more research is needed to determine the long-term risks and benefits of these products," Azad said. The study was published in Canadian Medical Association Journal (CMAJ).