Great Emperors and Kings, even wise sages become demonic when arrogance subdues them. 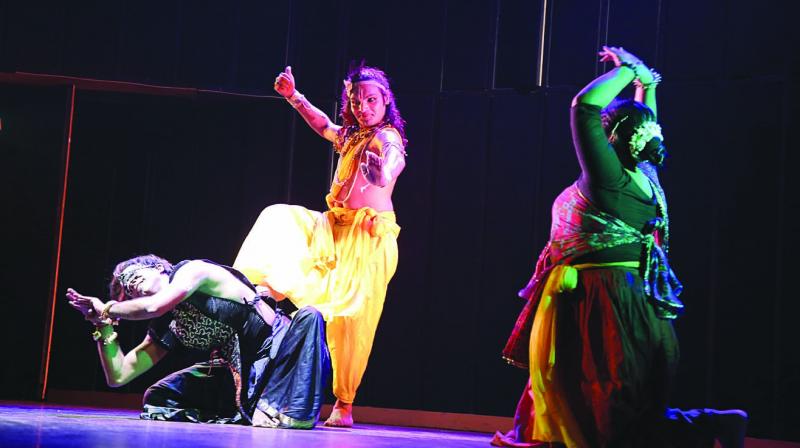 Devi is pleased and gives him a boon.

Padma Vibhushan Sonal Mansingh is unique, different, dynamic, exceptional and an encyclopaedia in herself. Recently, she presented Divyalok-Abode of Divinity, a breathtaking show that tell us the ideal way of living in today’s fast-paced world. Divided into three parts, the show began with “Purvarang” in which the Devi begins creation. It is taken from Devi Bhagvat. The Devi desires to create. She makes a male form, without consciousness. Then she divides it into three parts, thus creating Brahma, Vishnu and Mahesh. She explains to them their responsibilities in the forthcoming creation process. The three sit in meditation to gather energy for the task ahead. Wishing to test them, she assumes a frightful form and goes to Brahma. Frightened Brahma turns away. Vishnu too escapes into deep waters. But Mahesh remains unmoved. Devi is pleased and gives him a boon. Cleverly, Mahesh asks her to be born as a woman and meet him. Devi understands his intention but does not withdraw her boon. She predicted events which would first separate them and then bring them together.

The second part was “Kaaliya Mardan”. Taken from Bhagwat Puran, it is the story of Kaaliya, the deadly, poisonous king of the cobras, who poisons the river Yamuna killing all forms of living creatures, threatening the very existence of life.  It shows Krishna taking on the cobra in a feisty battle and finally subduing him. Krishna pardons the defeated and remorseful Kaaliya but orders him to go far away from habitation and make home in the deep ocean. In the modern context the serpent represents pollution, which is a threat to existence and has to be kept under check. The third part was “Asura and the Enchantress”. How to destroy ego of those who want to destroy creation, and is taken from from Shiva Puran. Great Emperors and Kings, even wise sages become demonic when arrogance subdues them. By doing terrific penance for many thousand years this asura-king acquires a desired boon from Shiva that gives him the power of burning anything that he touches. Pleased with his new-found power he tries to test its efficiency on Shiva himself. As he advances Shiva leaves the scene in great alarm with asura chasing him. Suddenly Asura’s attention is diverted towards a beautiful woman who entices him to a dance-competition in which the victorious asura would claim her in marriage! In the frenzied movements of dancing asura follows her, and places his own hand on his head, thus burning to ashes. This beautiful woman is Vishnu. Th act shows that over-indulgence in self leads to destruction.

Sandip Soparrkar is a well known Latin and Ballroom dancer, a World Book of Records holder and a Bollywood choreographer who has been honoured with National Achievement Award and National Excellence Award by the Govt of India. He can be contacted on sandipsoparrkar06@gmail.com.