Researchers claim if this part of viral cell’s assembly is stopped, the HIV virus will not be able to replicate. 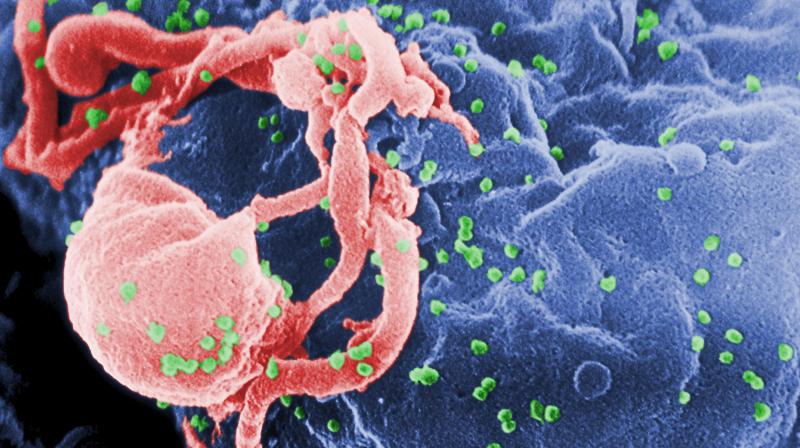 The newly-modeled cytoplasmic tail is involved in the assembly of the outer shell of the HIV virus, which attached to a host cell and begins the process of replication. (Photo: AP)

Researchers have finally been able to figure out the final piece to the HIV virus, and a complete picture of the HIV virus which had been short of a segment of one of its 15-component protein.

The newly-modeled cytoplasmic tail is involved in the assembly of the outer shell of the HIV virus, which attached to a host cell and begins the process of replication.

The researchers claim that if this part of the viral cell’s assembly can be stopped, the HIV virus will not be able to replicated and spread in the body.

The research, being conducted by the University of Alabama at Birmingham team was able to recreate the cytoplasmic tail’s structure, which they hope will open up a number of new avenues of research into possible therapies for HIV treatment.

Since the discovery of the virus, scientists have spent the last 30 years figuring out what its component parts are and how they work in concert to create such a lethal killing machine. They now understand that HIV is made up of 15 proteins and its own genome, the RNA that codes for HIV’s replication.

According to lead author of the study Dr Jamil Saad, the final segment of one of those proteins had been eluding ‘many labs for over 20 years.’

The cytoplasmic tail is the name of a structure inside a key protein of the HIV virus.

That protein codes for an envelope spike, or a structure on the membrane that encases the HIV virus, and the cytoplasmic tail is involved in how that envelope comes together with the rest of the virus cell.

According to Dr Saad, this segment is the internal anchor for a spike [which can] move on the surface of an HIV cell to engage host receptors.

HIV’s envelope spikes allow it to attach to a host cell and infect it. ‘

According to the researchers, if one cuts off the cytoplasmic tail that he and his team have now decoded, the spike won’t be incorporated into the HIV virus.