Congo prepares for first Ebola vaccinations as 26 die from virus

UN's WHO put death toll at 26, with three new cases in country's sprawling northwest confirmed by the country's health minister. 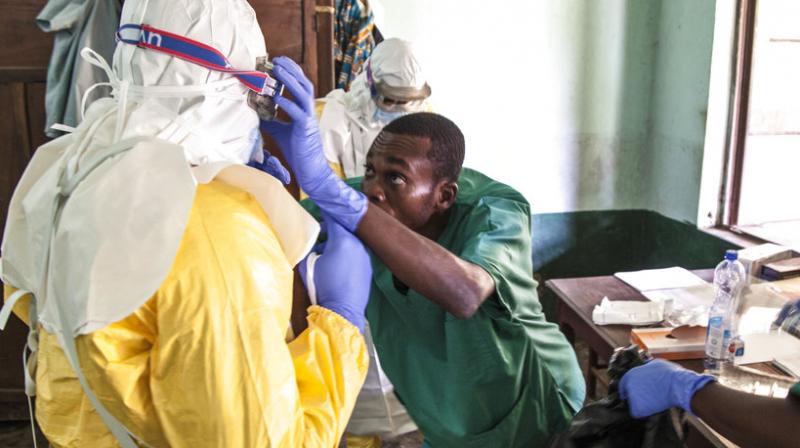 Health workers don protective clothing as they prepare to attend to patients in the isolation ward to diagnose and treat suspected Ebola patients, at Bikoro Hospital in Bikoro, the rural area where the Ebola outbreak was announced last week, in Congo. Congo's latest Ebola outbreak has now spread to Mbandaka, a city of more than 1 million people, a worrying shift as the deadly virus risks traveling more easily in densely populated areas. (Photo: AP)

Kinshasa: Congo's health ministry on Sunday said there is one new death from Ebola, bringing the death toll to 26 from the deadly outbreak in Equateur province in the country's northwest.

The Democratic Republic of Congo is preparing to launch an Ebola vaccination programme Monday in a bid to stop the latest outbreak of the dreaded fatal disease from spreading.

The UN's World Health Organization (WHO) put the death toll at 26, with three new cases in the country's sprawling northwest confirmed by the country's health minister in a statement seen Saturday.

Alarm bells sounded last week after the outbreak, previously reported in a remote rural area of the country, notched up its first confirmed case in Mbandaka, a city of 1.2 million.

The first wave of immunisations will target healthcare staff in the northwest who have had direct or indirect contact with ill patients, the Congolese government said.

Among them are Hilaire Manzibe, a doctor at Wangata Reference Hospital in the city, who described how he treated a patient on May 1 who arrived from Bikoro, the epicentre of the current outbreak, with symptoms of fever and vomiting.

But the patient's family refused treatment and instead returned home to administer traditional medicine -- a cultural hurdle that was one of the largest obstacles to overcome in the last outbreak which began in 2014.

More than a week later he returned, "the patient showed all the signs of the fever that has hit Bikoro," Manzibe said.

An isolation ward was prepared, but he succumbed to the fever.

"The patient was in contact with our receptionists, went to the doctor for a consultation and then was in my hands," explained nurse Julie Lobali, who will also receive a vaccination on Monday.

WHO has dispatched 35 immunisation experts, including 16 mobilised during the last deadly outbreak in West Africa which began in 2013. The rest of the team is made up of newly trained Congolese staff.

Around 600 vaccinations are to be administered.

Donors had promised 300,000 doses of the vaccine, a government spokesman said, of which around 5,400 have already been received.

Not an international concern

"In total, 43 cases of haemorrhagic fever have been flagged in the region of which 17 are confirmed, 21 are probable and five are suspected cases," he said.

In Geneva, WHO said 45 cases had been recorded, 14 of which have been confirmed by lab tests.

The WHO on Friday said the latest Ebola outbreak did not warrant being labelled an emergency of "international concern", adding that Kinshasa's response along with its own had been "rapid and comprehensive".

The government announced the outbreak of the deadly virus in northwestern Equateur province on May 8.

Ebola is both lethal and highly contagious, which makes it difficult to contain -- especially in urban environments where people are mobile and come into more contact with others.

It is notorious for its high fatality rate and extreme symptoms, which can include internal and external bleeding.

The current outbreak -- the ninth to hit the DRC since Ebola was identified in 1976 -- involves the same strain of the virus that struck three West African countries in 2013-15 and sparked an international panic. It went on to kill more than 11,300 people in the deadliest ever Ebola epidemic.