Yoga: A guide for women in 3 important stages of life...

Yogis themselves never held back from imparting the art of yoga to anyone on the basis of caste, sex, age or class. 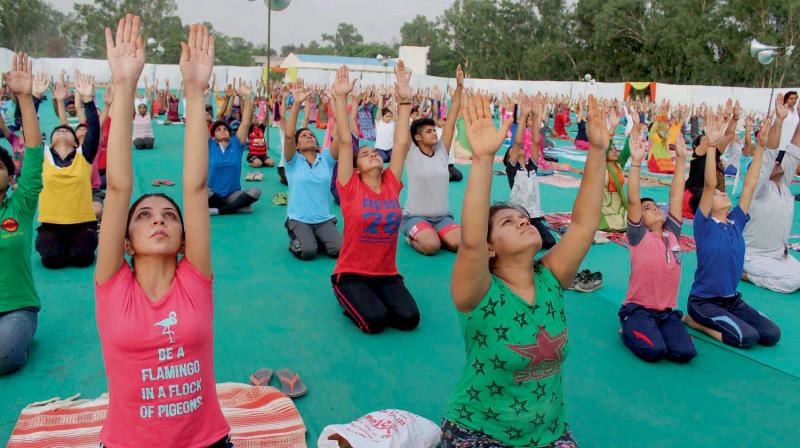 Youths perform yoga at a university in Meerut ahead of the International Yoga Day event on June 21. (Photo: PTI)

Nature intended that woman should be her masterpiece.
— Gotthold Ephraim Lessing

A woman not only possesses external beauty, with a soft and graceful form, but a force of character that gives her the power of endurance.

Above all, nature has endowed women with the responsibility of motherhood to perpetuate the species. In effect, the wealth of nations and the health of future generations depend upon the mental and physical well-being of women. If women are mentally and physically sound, their offspring, too, have a sturdy constitution and make for a healthy society and a strong nation.

Legend has it that Girija, or Parvati, Lord Shiva’s wife, was his first disciple in the art and intricacies of yoga. Also, there is a long series of famous women practitioners of yoga, from Vedic times to our own. While sage Yajnavalkya introduced his wife to yoga, Kaushyalya, the mother of Lord Ram, is said to have been of a tranquil disposition through yogic practice.

In the Mahabharata, there is reference of Sulabha, the daughter of King Pradhana, a brahmacharini (celibate) practised yoga and, in a debate on the subject, got better of King Dharamadhvaja. The Mahabharata mentions yoginis (a female practitioner of yoga) like the wife of King Prabhasa of Harivamsa, who achieved oneness with the universal self through yogic practice. In more recent times, there have been Lalla of Kashmir (also known as Lalla Yogishwari, Lal Ded, or Lalleshwari) in the 14th century and Bahinabai of Maharashtra in the 17th century. Both of them practised yoga assiduously and were renowned in their respective times.

In Sankhya Yoga, woman is compared to prakriti (nature). Like nature, she has to remain ever active and even as her life blossoms, the home is cheerful. That is why Kalidas describes woman as a “spark of life” in a family. This very spark uplifts every society.

Apart from her traditional roles, a woman has an additional part to play in society. In this age of all-round competition, women have taken on professional responsibilities like doctors, lawyers, politicians, university professors, etc., and have acquitted themselves worthily in each of these roles.

Yogis themselves never held back from imparting the art of yoga to anyone on the basis of caste, sex, age or class.

As women go through three important stages in life, beginning with youth, middle age, and, finally, old age, they have three milestones:

Menstruation: When a girl matures biologically, the physiological functions that develop the body into complete womanhood are at their peak. This is an immutable part of her life. Adolescence is the period of growth during which there is a transition from childhood to puberty. At this period important bodily and mental changes occur. A healthy menstruation depends upon the proper function of the ovary and, this in turn, upon healthy pituitary gland. A regular rhythm within the ovary also depends upon hypothalamus, which is closely connected with the pituitary gland.
Yoga asanas and pranayamas offer great help at puberty when the body is transforming into womanhood. Asanas, such as inverted poses and back bends, are useful for stimulating the pituitary gland. Asanas such as forward bends are also effective as pure blood is supplied to pelvic organs. For proper skeletal growth and for improving the shape of the body, the standing asanas are invaluable.

It is tug of war between two mindsets when childhood tries to hold her back while adolescence impels her forward. Yogic practice at this age gives courage to a girl to approach womanhood without any mental disturbances. It helps to control and check impulses and emotions. It gives balance of mind. A girl conquers fears and nervousness and learns to face life and the society around her with confidence.

Pregnancy: The saying “As you sow, so shall you reap” is apt in the case of pregnant women. It is essential for a pregnant woman to maintain her physical and mental well-being, both for her own sake and for the sake of her unborn child. There are mistaken notions about yoga for pregnant women. There is a fear in the minds of some women that if yoga is done during pregnancy, it may lead to miscarriage. On the contrary, in asanas, the uterus is exercised and becomes stronger and functions more efficiently, and helps make child delivery normal. In fact, to avoid miscarriage owing to hormonal deficiency, women should practice certain asanas even before conception, such as Sirsasana, Sarvangasana, Setubandhasana and Janushirsasana.
Yoga asanas are also beneficial in safeguarding against conceiving owing to defects of the ovaries, glands or fallopian tubes. Hence, it is recommended that every woman begin to practise yoga before conception, not only to improve her mental health, but also to ensure sound health for her unborn child and, hence, future generations.

Menopause: Menstruation either stops suddenly or becomes irregular in the age band of 40-50 years.

All these are signs that the reproductive functions of the woman are coming to an end, as the ovaries stops functioning, while the other glands, namely, the thyroid and the adrenal, become hyperactive creating an imbalance of hormones. Women suffer from hot flushes, high blood pressure, heaviness of breasts, headaches, insomnia, obesity, etc., as a result. Emotional disturbances are also common during this period.

At this juncture, the practice of yoga asanas is extremely beneficial, as it can calm the nervous system and bring equipoise in one’s temperament.

Yoga is a gift for old age. One who takes to yoga in this period of life gains not only health and happiness but also freshness of the mind.

Hence, nobody is exempted from yoga practice and there is no excuse for not doing yoga. How useful yoga is, can only be understood by practising it. It is thus well said: Yogah Karmasu Kaushalam!

The writer is a renowned yoga teacher in Delhi