Researchers question the benefits of apple cider in promoting weight loss but say that it might help in controlling blood sugar. 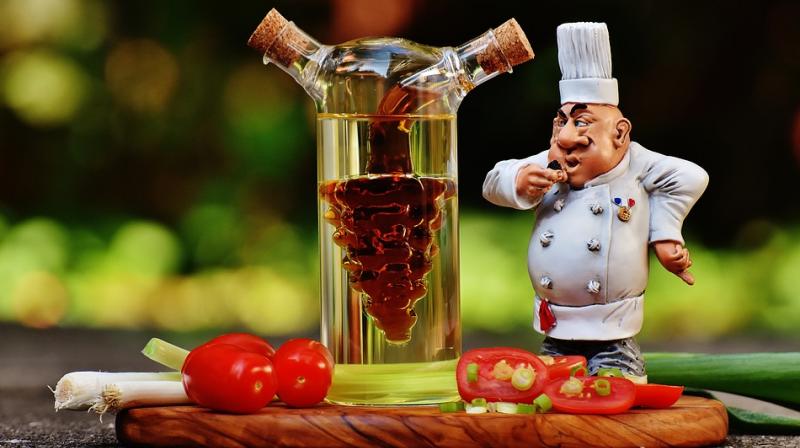 Studies show that while weight loss from apple cider vinegar is plausible, the benefits are negligible (Photo: Pixabay)

Atlanta: If you have ever searched the Internet for weight loss information, you would have definitely come across the following tip: Apple cider vinegar has been considered beneficial when it comes to keeping your weight down.

But is it true?

"A lot of this is marketing," nutritionist Lisa Drayer said, "and it's been around a long time. I remember, probably 15 years ago, covering the apple cider vinegar diet. When you looked closely, the diet paired apple cider vinegar pills with a low-calorie menu. It's no wonder people lost weight.

"So I think there's been a lot of advertising about the benefits of apple cider vinegar for weight loss," she added, "and consumers get those messages, and they think, 'Oh, this must be the next magic bullet.' But whether it's based on science is another matter."

A lot of the research on vinegar's relationship with weight loss is in animals, mainly mice and rats. Studies show that acetic acid, the main component of apple cider vinegar, can suppress body fat accumulation and metabolic disorders in obese rats. But of course, mice are not men, and rats are not women, so these findings prove little.

Studies in humans have been small, which limits their validity.

"But they do suggest a weight loss from apple cider vinegar is plausible," Drayer said. "For example, some research suggests that it might promote satiety and make you consume fewer calories throughout the day."

A 2005 study of 12 people found that to be true when vinegar was consumed with a bread meal. A 2013 study of 16 folks found the same, but only because the vinegar caused nausea when ingested. "On this basis, the promotion of vinegar as a natural appetite suppressant does not seem appropriate," that study concludes.

The most-cited study to prove a connection to weight loss was done in 2009 with 175 "obese" Japanese subjects, ages 25 to 60, who were split into three groups. Considered "obese" by Japanese standards, each subject's BMI was between 25 and 30; in the United States, people aren't considered obese until their BMI exceeds 30. Anyone who had high cholesterol or diabetes or was using medications was excluded.

Over a 12-week period, the groups consumed a beverage that contained either one tablespoon of vinegar, two tablespoons of vinegar or no vinegar at all. At the end of the three months, those who consumed any amount of vinegar had a lower body weight, a smaller body mass index, less visceral fat, a smaller waist measurement and lower triglyceride levels than the placebo group that drank no vinegar.

That sounds fantastic until you look closely at the amount of weight that was lost.

"Only 2 to 4 pounds in three months over a placebo," Drayer explained. "That's only a third of a pound a week. Most diets have a much bigger result. So you would you definitely have to do many other things to accomplish any significant weight loss."

Dietitian Carol Johnston has been studying the effects of acetic acid on diabetic blood glucose levels since 2004. While she believes the Japanese study's findings make sense due to animal research, she too is quick to point out that the weight loss in humans was "very, very modest."

"In fact, I would say most people who are on a diet for 12 weeks and only lose a couple of pounds aren't going to be very happy," Johnston said.

Where Johnston's research has shown significant benefits from vinegar, however, is in blood sugar control. Over the years, she's done a number of studies that show vinegar helps control blood sugar spikes for people with type 2 diabetes and those who are prediabetic, also known as insulin-resistant. She's even seen a slight benefit for healthy control subjects.

"Vinegar had an impact in all groups, but the most significant impact was in the prediabetic group," she said. "In prediabetics, it was too good to be true; (blood sugar) fell a good bit and stayed that way. It may be this is the group that could benefit the most."

The theory, according to Johnston, is that acetic acid appears to interfere with enzymes that break down starch molecules. This antiglycemic response can be induced by any sort of vinegar, such as red and white wine vinegars, pomegranate vinegar or even white distilled vinegar. It's the acetic acid in the vinegar, not the type, that produces the result.

"Basically, what acetic acid is doing is blocking the absorption of starch," said Johnston, who is associate director of the Arizona State University's School of Nutrition and Health. "If my study subjects eat a starch and add vinegar, glucose will go down. But if they drink sugar water and add vinegar, nothing happens. So if you're having bacon and eggs, don't bother. It only helps if you are consuming a starch."

It's possible that blocking starch absorption may help with weight loss as well, Drayer says, because starches cause blood sugar spikes and therefore act as an appetite stimulant.

Though the research on acetic acid's benefits looks promising, nothing's definitive. It could be that other elements in apple cider and other vinegars also play a role. Take the trace chemicals in vinegar that vary based on where each brand was fermented.

could be that some of those ingredients are important or part of the effect we are seeing," Johnson said. She added that it will take much larger randomized scientific trials to prove any cause and effect between vinegar and weight loss, and especially between vinegar and diabetes or cardiovascular risks.

"Somebody, probably the federal government, is going to have to fund a multimillion-dollar grant and recruit hundreds of people at risk for diabetes and metabolic disorders to truly determine if vinegar is going to make a difference," Johnston said.

But until those occur, Johnston sees no harm in using vinegar to control blood sugars after starchy meals. After all, balsamic and wine vinegars are part of the Mediterranean diet, long associated with heart health and other benefits.

"Even in healthy people, that post-meal surge in blood sugar is a risk factor for heart disease, so in my mind, everyone should take advantage of the benefit that vinegar may provide. But I'd do it the way people have done for centuries, by adding it to their food," she said.

"What I would recommend is using salad dressings that contain vinegar, as it contains no calories," Drayer agreed. "When you make a dressing, use three parts oil to one part vinegar. Or reverse it and do one part oil and three parts vinegar."

You can also use it with food preparation, says Drayer.

"Dip your chicken with egg whites and bread crumbs mixed with balsamic vinegar for poultry or fish," she said. "Or you can drink it in water, which is good, as water makes you feel full."

But she stresses that if you choose to drink your vinegar, make sure that the tablespoon is added to a full glass of water. Properly diluting vinegar is key. Otherwise, it can damage your teeth, throat and stomach lining.

"Vinegar has that strong smell and puckering taste, so if you take a breath, you could inhale it into your lungs and burn those a little, because it's an acid," Johnston said. "So never drink it straight. Dilute it in water, and drink before you eat or with the first bites of your meal.

"You want the acetic acid in stomach before the meal to do the most good," she said. "Mediterranean people ate the salad with vinegar, then they ate the pasta."