Reprogramming the pacemaker helps in better functioning of the heart 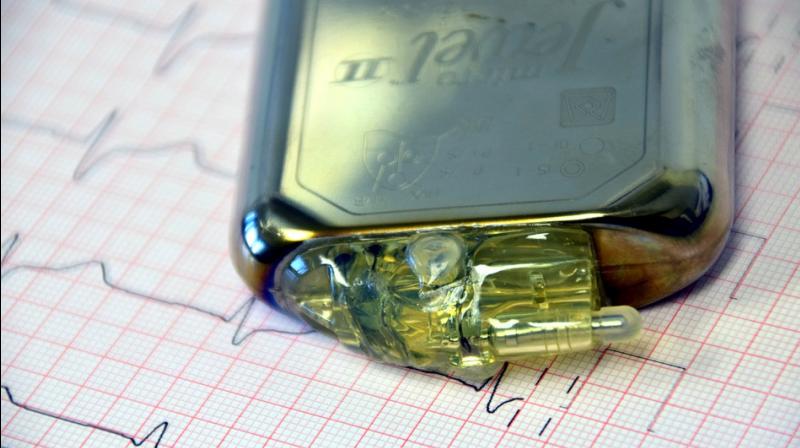 Avoiding a scan of the chest and reprogramming the pacemaker before and after the scan can prevent malfunction of cardiac pacemakers and implantable cardiac defibrillators. (Photo: Pixabay)

It might be possible for people with an older pacemaker to safely get an MRI after all.

A new study suggests that avoiding a scan of the chest and reprogramming the pacemaker before and after the scan can prevent malfunction of cardiac pacemakers and implantable cardiac defibrillators.The finding is good news for pacemaker and defibrillator patients because it makes it easier for their doctors to diagnose problems that can be difficult to detect without magnetic resonance imagining (MRI).

"If you need an MRI, if an MRI is the study of choice, there's no reason you should not have access to it because we didn't really find any evidence of harm to the patient," lead author Dr. Robert Russo of the Scripps Research Institute in La Jolla, California, told Reuters Health.

"This is very significant in terms of clinical practice because for years and years and years it's always been that scanning pacemaker patients with MRI was contraindicated" unless they had a newer device specifically designed to be safe during the test, said Dr. Robert Watson, chairman of neuroradiology at the Mayo Clinic in Rochester, Minnesota.

But it's also "absolutely imperative that people not misconstrue this study with the sound bite that MRI is safe in patients with pacemakers. You can still kill a patient with an MRI if you do it wrong," said Watson, who was not involved in the study. People with the implantable devices are often excluded from MRIs out of concern that the powerful magnetic fields emitted by the machines can overheat the lead wires implanted in the heart and interfere with the pacemaker's sensitive electronics.

Newer devices are designed to reduce that risk, but about 2 million Americans and another 6 million people worldwide don't carry such "MRI-conditional" implants. A 2005 analysis estimated that at least half of these people will need an MRI in their lifetimes.The Russo team used a registry, developed in 2009, that logged cases of adults with a programmable defibrillator or pacemaker implanted after 2001 who got an MRI.

If the patient had an adequate heart rate of at least 40 beats per minute, the devices were turned off. If the rate was lower, the devices were set to blindly make the heart beat at a steady rate, eliminating the usual feedback the devices get to readjust their electrical pulses. After the MRI, the settings were restored. At 19 U.S. centers, 818 patients with pacemakers and 500 with implantable defibrillators were evaluated, according to the report in the New England Journal of Medicine.

Three quarters of the MRIs were done on the brain or spine. The chest area was not imaged.None of the MRI recipients died and only one needed to have their implanted device replaced due to a generator failure apparently caused by a failure to properly reprogram the implantable defibrillator before the MRI.Six patients developed a temporary rhythm problem that corrected itself within two days. Another six needed to have their devices reset with non-critical data, such as patient identification information.

The team logged some voltage changes, but "all the changes we saw were relatively small and not clinically significant," said Russo.In addition, the number of MRIs that patients received did not seem to affect the risk."One patient had a total of 11 MRIs of the brain performed because of a history of primary cancer of the brain," he said.

That case showed why MRIs are important for pacemaker patients because, after chemotherapy, radiation and surgical treatment, "CT scanning suggested there was no recurrence. But MRI showed there was residual tumor and more treatment was necessary," he said.Patients need to tell medical personnel if they have an implantable device, Watson stressed. But with MRI available to them, and the proper protocols to avoid or deal with any unexpected device malfunctions, "you can make life-changing diagnoses."

Whether chest MRIs are just as safe remains an open question. Russo said he suspects that they are.Watson said the Mayo Clinic, using a multidisciplinary team, has "done a fair number of cardiac MRIs and have not experienced an adverse patient outcome."