Infected, not recovering? Blame it on the tandoori chicken!

Poultry farms are deploying antibiotics not to treat sick animals but to fatten them quickly. 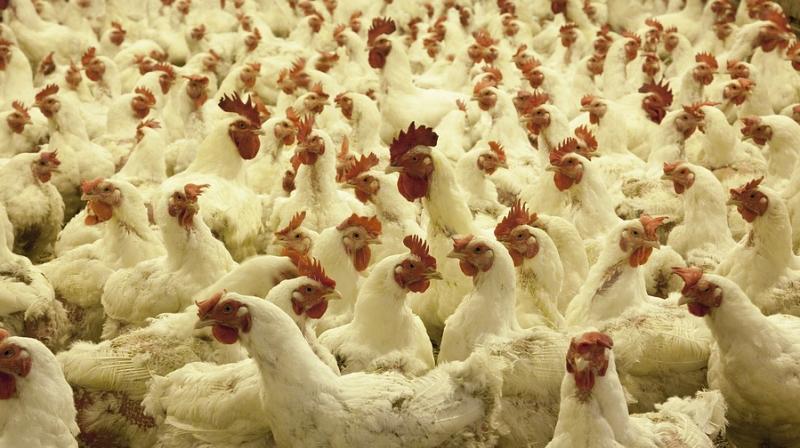 New Delhi: Love for chicken delicacies -- beit butter chicken or fried -- may involve a health risk for not only Indians but the entire world, a new study warns.

According to the Indo-American study, Punjab, famous for its large and crowded poultry farms, may be sprouting 'superbugs' or bacteria that are resistant to routine antibiotics. The study reports high prevalence of antibiotic-resistant bacteria detected in poultry farms in Punjab and warns of potentially disastrous consequences to human health due to use of growth-promoting antibiotics in animal farming.

"The world is on the brink of losing these miracle cures," said recently-retired WHO Director-General, Margaret Chan, referring to antibiotics that were hailed as "wonder drugs", the miracles of modern medicine.

Crowded poultry farms could be breeding superbugs in Punjab, finds the new study. Next time you get an infection that is hard to cure by routine antibiotics a phenomenon ominously called the emergence of superbugs, one may want to blame the poultry farms, especially from Punjab where experts say use of antibiotics is rampant for rapidly fattening chickens.

Poultry farms are deploying antibiotics not to treat sick animals but to fatten them quickly.

The study led by researchers from the Center for Disease Dynamics, Economics and Policy (CDDEP), Washington DC published in the journal Environmental Health Perspectives finds high levels of antibiotic-resistant bacteria in chickens raised for both meat and eggs on farms in Punjab.

According to the World Health Organisation (WHO), Antimicrobial resistance (AMR) threatens the effective prevention and treatment of an ever- increasing range of infections caused by bacteria, parasites, viruses and fungi. AMR is an increasingly serious threat to global public health that requires action across all government sectors and society.

In 2016 globally, 4,80,000 people develop multi-drug resistant TB each year, and drug resistance is starting to complicate the fight against HIV and malaria, as well. A study done by doctors at the All India Institute of Medical Sciences (AIIMS) found that due to the rampant misuse of antibiotics even new born children are getting infected.

Specialists at AIIMS say it is scary that antibiotics are being blunted by the abuse, misuse and over use even as the pipeline for the discovery of new antibiotics is almost frozen with no new ones on the horizon. Recently, AIIMS found traces of antibiotics even in the sewage drains of Delhi. Such misuse of antibiotics leads to potent super bugs being evolved.

The Punjab poultry farm survey is largest study of its kind looking at sources of AMR ever to be conducted in India, researchers collected more than 1,500 samples from 530 birds on 18 poultry farms in six districts in Punjab and tested them for resistance to a range of antibiotics critical to human medicine.

Meat producing farms had twice the rates of antimicrobial resistance as compared to egg-producing farms, as well as higher rates of multidrug resistance. High levels of resistance to many important antibiotics were found across the board, ranging from 39 percent for ciprofloxacin, which is used to treat respiratory infections, to 86 per cent for nalidixic acid, which is used to treat urinary tract infections.

A 2015 report by the Ministry of Health and Family Welfare found that that Salmonella typhi had become multidrug resistance (MDR) to ampicillin, chloramphenicol and trimethoprim-sulfamethoxazole but is showing a downward trend. However, more than 50 per cent of bacterial isolates of Klebsiella species and E. coli were found to be resistant to the currently used 3rd generation cephalosporins, but they are sensitive to carbapenems and colistin.

There is no data available regarding fatalities reported due to antibiotic resistance. In the new study on Punjab's poultry farms, almost 60 per cent of the most commonly found gut bacteria called Escherichia coli (E. coli) samples that were analysed as part of the study contained 'resistance conferring' genes, that not only render many antibiotics ineffective but can also be easily passed on to other types of bacteria.

Antimicrobial growth promotion (AGP) use in farm animals is increasing worldwide in response to the rising demand for food animal products. Previous studies by CDDEP researchers have projected that antimicrobial consumption in food animal production will rise globally by 67 percent by 2030, including more than a tripling of use in India.

"This study has serious implications, not only for India but globally," adds Ramanan Laxminarayan. "We must remove antibiotics from the human food chain, except to treat sick animals, or face the increasingly real prospect of a post-antibiotic world."

According to WHO, a very significant part of out-of- pocket expenditure on health care is on medicines, but longer treatments, with ineffective drugs and/or second line expensive antibiotics is pushing the treatment costs higher. On the other hand, higher priced drug regimens are less likely to be adhered to, which again contributes to the AMR. "AMR has huge implications for India" says Dr Henk Bekedam, WHO Representative to India. Unfortunately some of the blame falls on the lifeless but tasty tandoori chicken.