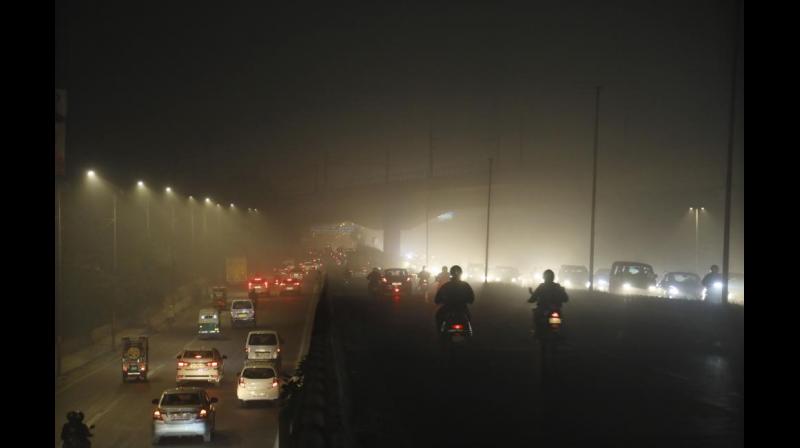 The study was conducted to understand the disease burden of non-communicable diseases as these secondary infections are an increasing burden on the family and also the healthcare sector. Representational Image (AP)

Hyderabad: Air pollution is the biggest contributor for rising cases of non-communicable diseases (NCDs) such as hypertension, diabetes, asthma, obesity as well as with issues pertaining to digestive tract, heart and lungs in urban India. This has come to the fore during the pandemic.

The mortality rate among those suffering from NCD's has been recorded at 60 per cent during the pandemic.

It has been found in a study of 2,33,672 people in 673 public health centres across 21 states that air pollution contributes 76 per cent, low-physical activity 67 per cent, imbalanced diet 55 per cent, stress 44 per cent, obesity 24 per cent, tobacco 16 per cent and alcohol nine per cent.

The study report was prepared by Thought Abrigate Research Institute for Assocham. It reveals that there are 116 per 1000 population in India now suffering from NCDs. The prevalence in males is 119 per 1000 people while in females it is 113 per 1000. Incidentally, Andhra Pradesh and Telanagna have the highest prevalence of 150 per 1000 people.

The study was conducted to understand the disease burden of non-communicable diseases as these secondary infections are an increasing burden on the family and also the healthcare sector.

Issues of post-Covid 19 complications are emerging due to secondary diseases, which are not identified in 40 per cent of the people.

The survey showed that 60 per cent of them were diagnosed with the disease only after one year of suffering. Those suffering from NCDs are above 35 years of age and 2/3 rd of these in the productive age group do not get themselves diagnosed despite symptoms.

In the preventive strategy, it was noted that there must be early diagnosis of the disease and there must be more conscious efforts at the community level to reduce sedentary lifestyle, break unhealthy habits of low-physical activity and unhealthy food habits.