COVID-19 most transmissible 2 days before, 3 days after symptoms appear: Study 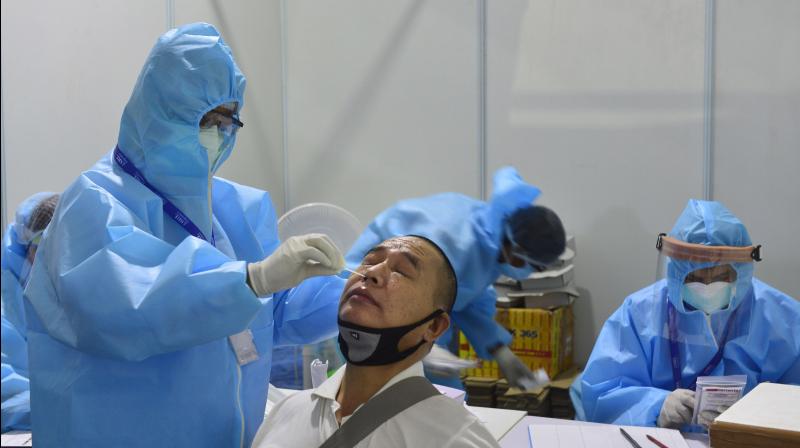 Beijing: People infected with the SARS-CoV-2 virus, which causes COVID-19, are most contagious two days before, and three days after they develop symptoms, according to a study conducted in China.

The research, published in the journal JAMA Internal Medicine, also found that infected individuals were more likely to be asymptomatic if they contracted the virus from a primary case -- the first infected person in an outbreak -- who was also asymptomatic.

"In previous studies, viral load has been used as an indirect measure of transmission," said Leonardo Martinez, an assistant professor at Boston University School of Public Health (BUSPH) in the US.

"We wanted to see if results from these past studies, which show that that COVID cases are most transmissible a few days before and after symptom onset, could be confirmed by looking at secondary cases among close contacts," Martinez said.

The researchers conducted contact tracing and studied COVID-19 transmission among approximately 9,000 close contacts of primary cases in the Zhejiang province of China from January 2020 to August 2020.

"Close" contacts included household contacts -- defined as individuals who lived in the same household or who dined together -- co-workers, people in hospital settings, and riders in shared vehicles.

The researchers, including study co-lead Yang Ge from the University of Georgia College of Public Health, US, monitored infected individuals for at least 90 days after their initial positive COVID test results to distinguish between asymptomatic and pre-symptomatic cases.

Of the individuals identified as primary cases, 89 per cent developed mild or moderate symptoms, and only 11 per cent were asymptomatic -- and no one developed severe symptoms.

Household members of primary cases, as well as people who were exposed to primary cases multiple times or for longer durations of time, had higher infection rates than other close contacts.

However, regardless of these risk factors, close contacts were more likely to contract COVID-19 from the primary infected individual if they were exposed shortly before or after the individual developed noticeable symptoms.

"Our results suggest that the timing of exposure relative to primary-case symptoms is important for transmission, and this understanding provides further evidence that rapid testing and quarantine after someone is feeling sick is a critical step to control the epidemic," Martinez said.

"This study further emphasises the need for vaccination, which reduces clinical severity among people that develop COVID," Martinez added.