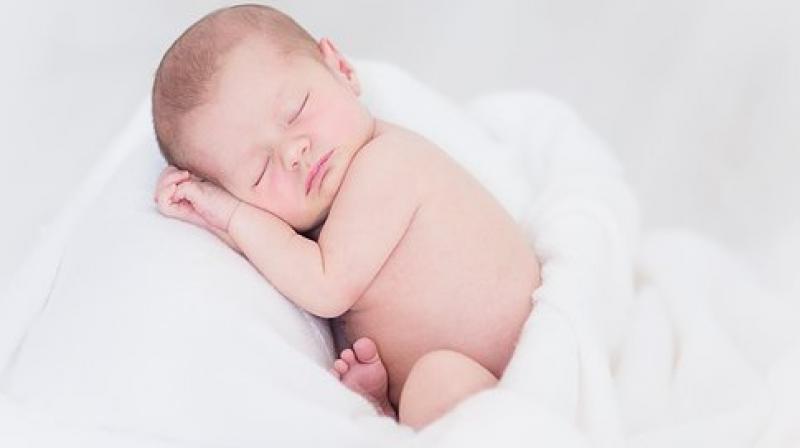 For the study, researchers used high-density electroencephalography (EEG) and other tools to map interactions between different brain regions when babies were in active sleep and quiet sleep. (Photo: Representational/Pixabay)

Washington: A new study has highlighted that preterm birth can change an infants' brain activity while they are sleeping and also affects their future brain health. The study published in the journal Nature Communications analysed brain activity data collected from 94 infants from Helsinki, Finland including 42 infants who had been born extremely premature at 27 weeks and a control group of 52 infants who had been born at full term.

"Quality of sleep is a vital indicator of brain health, particularly in newborn infants, and our study looked at the brain process supporting distinct sleep patterns in preterm and full-term babies when measured about two weeks after the full term due date," said Dr Luca Cocchi, senior author and head of QIMR Berghofer's Clinical Brain Networks team.

"We found babies born at full term had marked reorganisation of brain activity during different states of sleep, while it wasn't as distinct in very premature babies," Dr Cocchi added. Dr Cocchi further said, "Our study also indicated that the differences in neural sleep activity at 42 weeks could predict a child's ability to use visual information to solve problems at two years of age. There was some indication it might also have a small effect on social-emotional abilities - but that would require further research."

The study author also explained that sleep is like other behaviours and a 'good sleep relies upon the proper organisation of dynamic patterns of brain activity during different sleep states.' For the study, researchers used high-density electroencephalography (EEG) and other tools to map interactions between different brain regions when babies were in active sleep and quiet sleep.

"These two stages are key components of a newborn's sleep-wake cycle, and gradually transform with age into cycles of rapid eye movement (REM) and non-REM sleep states such as deep sleep," said Dr James Roberts, a co-author of the study and head of QIMR Berghofer's Brain Modelling Group.

He added, "The project was unique because it used advanced modelling methods to address a scientific problem that had potential implications for lifelong brain health." "These tools have been previously used to describe complex systems such as the acoustics of musical instruments, but we've been able to adapt it to brain waves in sleeping babies."

Neuroscientists, physicists, neonatal clinical neurophysiologists, psychiatrists and biomedical engineers from several hospital and research facilities across the world collaborated for the study.