Probiotics in yoghurt can help get rid of common cold: Study. 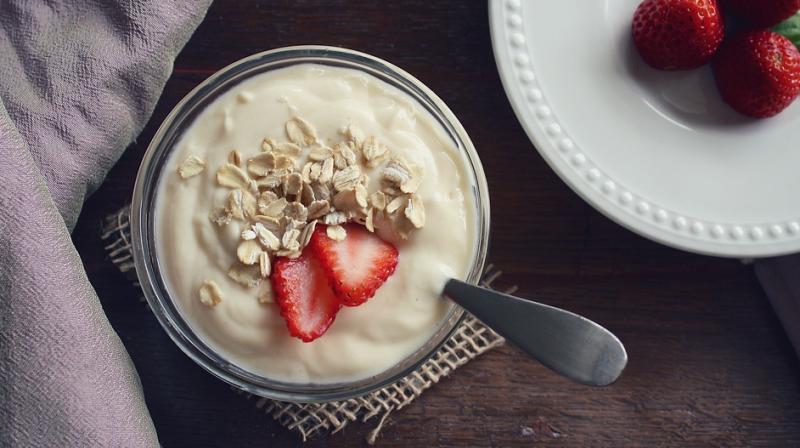 Yogurt is smooth and goes down easy, so if you have a sore throat or even a runny nose, it's comfortable to eat. (Photo: Representational/Pixabay)

Washington: A recent study has claimed that yogurt might prove to be helpful to those looking to get rid of the common cold.

When down with a running nose and sore throat, we tend to turn to home remedies. While we all know how warm water, herbal tea, ginger, honey, and chicken soup work wonders for curing a cold and cough, researchers have suggested that yogurt could be added to this list of cold-fighting remedies!

"When it comes to yogurt specifically, I'd say there's not a lot of research that we can point to that indicates yogurt reduces symptoms of a cold," said Mickey Rubin, vice president of nutrition research for the National Dairy Council.

"There are some things (in yogurt) we can point to that, in theory, would be beneficial," Rubin added. Yogurt is full of probiotics which can help boost immunity, CNN reported citing dietician Kristi L. King.

Studies that have looked at probiotics have found some promising results in terms of reducing the duration and intensity of cold. However, specific benefits can only be attributed to the actual strains studied, which do not necessarily exist in regular, non-supplemented yogurt, according to Rubin.

Conventional yogurt contains Lactobacillus bulgaricus and Streptococcus thermophilus, two cultures that are integral to the yogurt-making process, and as such are known as "starter cultures." While these are beneficial bacteria, they are not necessarily the same probiotics that have been studied in clinical trials.

"We know yogurt is a nutritious food choice and we know probiotics are beneficial to health, so including them in an overall healthy eating plan makes sense, but recommending them specifically for the common cold would be premature," said Rubin.

Yogurt also contains another immune booster: zinc. Research indicates that zinc can reduce the duration of cold symptoms, but the amounts of zinc needed for benefits, at least 75 milligrams, is much higher than the 2 milligrams present in an 8-ounce cup of yogurt.

Carbohydrates in yogurt provide energy, which is important in helping one recover from a cold.

A recent study found that when women consumed yogurt every day for nine weeks, they had reduced inflammatory markers in their blood, the findings that suggest a mechanism by which yogurt might be helpful in fighting off cold symptoms.

"The common cold and its symptoms are an inflammatory response to the bug such that if yogurt or other foods reduced inflammation, it could, in theory, be beneficial but we need more research to know for sure," said Rubin.

Although the ability of yogurt to help fight a cold is theatrical right now, experts say there's no good reason to not choose yogurt when you have the sniffles or difficulty swallowing.

"I wouldn't rely solely on yogurt to fight the cold, but in conjunction with a healthy diet, yogurt may be beneficial," said King. "Yogurt is smooth and goes down easy, so if you have a sore throat or even a runny nose, it's comfortable to eat," added Rubin.

For maximum benefits, King recommended eating plain yogurt with other antioxidant-rich foods, such as berries, which contribute natural sweetness, in addition to more cold-fighting nutrients. "Pairing yogurt with blueberries or strawberries will give you an extra dose of vitamin C and antioxidants to fight the cold off," she said.

So you might want to choose yogurt for its soothing texture and nutritional attributes, which include calcium and vitamin D, along with possible cold fighters like zinc and probiotics, but not necessarily as primary therapy for cold.