When the patch is pressed into the skin for about two minutes, micro-needles become embedded in the skin and detach from the patch. 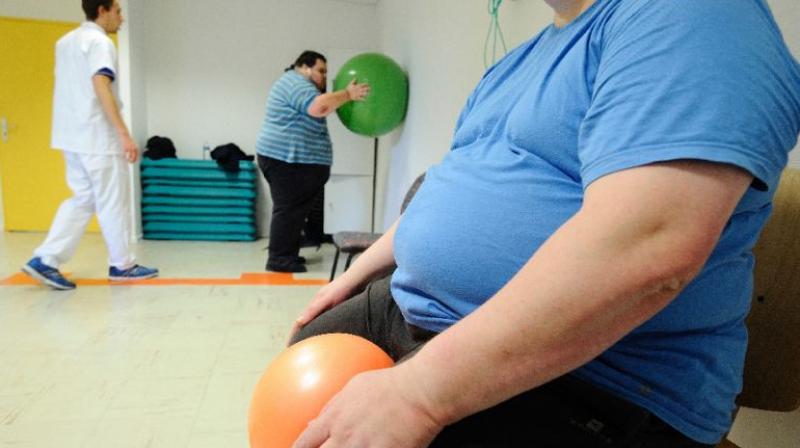 As the needles degrade, the drug molecules then slowly diffuse to the energy-storing white fat underneath the skin layer (Photo: AFP)

This innovative approach developed by scientists from the Nanyang Technological University, Singapore reduced weight gain in mice on a high fat diet and their fat mass by more than 30 per cent over four weeks.

The new type of skin patch contains hundreds of micro- needles, each thinner than a human hair, which are loaded with the drug Beta-3 adrenergic receptor agonist or another drug called thyroid hormone T3 triiodothyronine.

When the patch is pressed into the skin for about two minutes, these micro-needles become embedded in the skin and detach from the patch, which can then be removed.

As the needles degrade, the drug molecules then slowly diffuse to the energy-storing white fat underneath the skin layer, turning them into energy-burning brown fats.

Brown fats are found in babies and they help to keep the baby warm by burning energy. As humans grow older, the amount of brown fats lessens and is replaced with visceral white fats.

Published in the journal Small Methods, this approach could help address the worldwide obesity problem without resorting to surgical operations or oral medication which could require large dosages and could have serious side effects.

"With the embedded microneedles in the skin of the mice, the surrounding fats started browning in five days, which helped to increase the energy expenditure of the mice, leading to a reduction in body fat gain," said Xu Chenjie, from the Nanyang Technological University.

Obesity which results from an excessive accumulation of fat is a major health risk factor for various diseases, including heart disease, stroke and type-2 diabetes.

The World Health Organisation (WHO) estimated that 1.9 billion adults in the world were overweight in 2016 with 650 million of them being obese, researchers said.

"What we aim to develop is a painless patch that everyone could use easily, is unobtrusive and yet affordable," said Chen Peng, from the Nanyang Technological University.

"Most importantly, our solution aims to use a person's own body fats to burn more energy, which is a natural process in babies," Peng said.

Tags: health and well being, causes of obesity, skin patch