Life   Health  30 Apr 2019  Immunisation in India and the women behind it
Life, Health

Immunisation in India and the women behind it

Insights into the immunisation machinery of India and the women drivers of Universal Health Coverage. 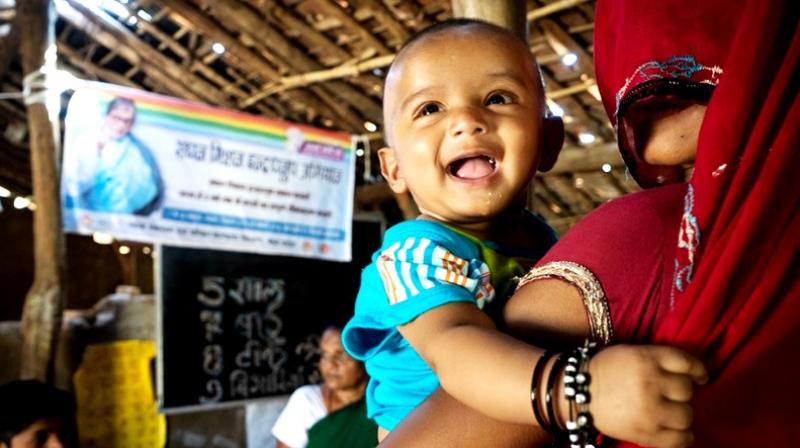 An infant with his mother at an immunisation session site at Bhitara village, Madhya Pradesh. (Photo: MoHFW)

New Delhi: The theme for The World Immunisation Week (April 24–30) this year is ‘Protected Together: Vaccines Work’ and the Ministry of Health and Family Welfare (MoHFW), India celebrated the success stories and women leaders in the areas of public health and vaccination. Each and every clog of the public healthcare machinery in India is imperative to ensure the overall health and well-being of the citizens of the country, even in the remotest parts, when it comes to immunisation.

The first ever immunisation programme in India was introduced in 1978 as ‘Expanded Programme of Immunization’ (EPI) by the MoHFW, Government of India (GoI). In 1985, the programme was modified as ‘Universal Immunization Programme’ (UIP) to be implemented in phases, in order to cover all districts in the country by 1989-90, making it one of largest health programmes in the world.

Despite being operational for many years, UIP was only able to fully immunise 65 per cent children in the first year of their life. To strengthen and re-energise the programme and achieve full immunisation coverage for all children and pregnant women at a rapid pace, GoI launched ‘Mission Indradhanush’ (MI) in December 2014.

MI aims to cover all those children by 2020 who are either unvaccinated, or are partially vaccinated against vaccine preventable diseases, in both urban and rural areas. The programme provides life-saving vaccines to all children across the country free of cost to protect them against tuberculosis, diphtheria, pertussis, tetanus, polio, hepatitis B, pneumonia, meningitis, measles and rubella, Japanese encephalitis and rotavirus diarrhea in select states and districts.

With the Mission currently in full swing,there is emphasis on reaching out to the most distant communities and settlements in the far-flung regions of many states. One such inspiring story to deliver immunisation, to areas where even GPS and mobile networks do not function and basic communicationis a challenge, is that of Alirajpur, Madhya Pradesh. 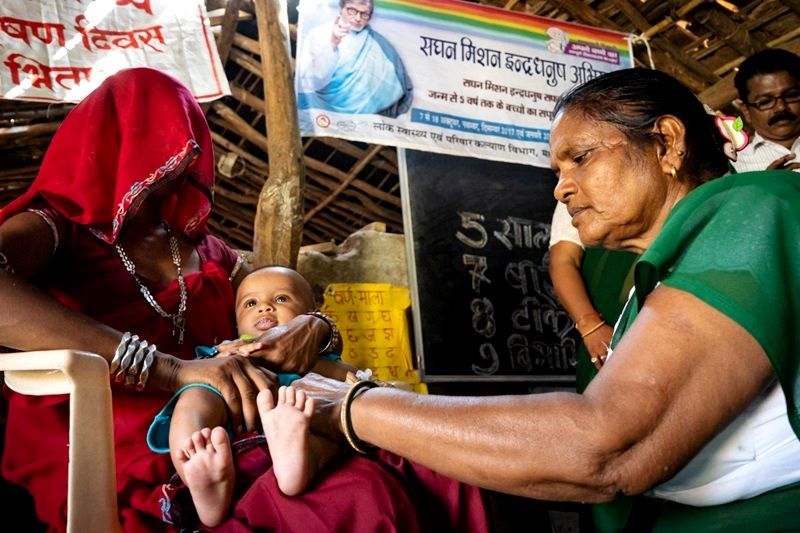 For almost 20 years, ANM Preskila Parmar has been serving the region of Alirajpur, Madhya Pradesh, providing life-saving interventions and administering vaccines to over 5,000 people in the five villages that she covers all by herself. (Photo: MoHFW)

Located in the backwater zone of the Narmada river makes it extremely challenging for the health workers to access this region, which is only possible by a boat ambulance called ‘Janani Express’. The Express provides regular healthcare services to the tribal dwellers of the villages nestled in these hilly areas, immunising mothers and children.

Many villages of Sondwa region in Alirajpur have also been declared as flood affected and in spite of these extreme weather conditions the implementation of the immunisation programme during MI was smoothly carried out under the leadership of young and enthusiastic Dr Narendra Bhaydia, the District Immunisation Officer (DIO), Alirajpur. 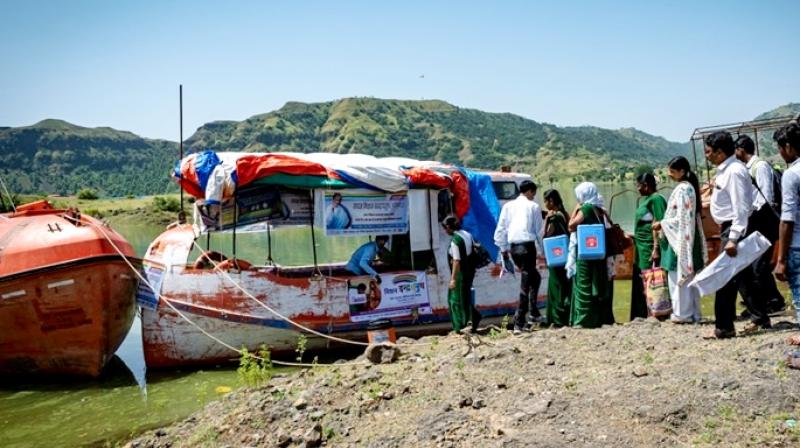 Janani Express, the boat ambulance service provided by the Central government under the National Rural Health Mission, used by the health workers to carry out vaccination of pregnant mother and children of isolated hamlets and communities residing in riverine areas. (Photo: MoHFW)

During the Mission, to ensure that no child was left unvaccinated, the block level officials also accompanied the health workers to the immunisation sessions. For almost 20 years, auxiliary nurse midwifery (ANM) worker Preskila Parmar has been serving this area single-handedly. Responsible for providing life-saving interventions, she administers vaccines religiously to over 5,000 people in the five villages that she covers. Parmar travels on foot around the housing clusters, each of them several kilometers apart, since there are no roads or other form of transport available in the region. 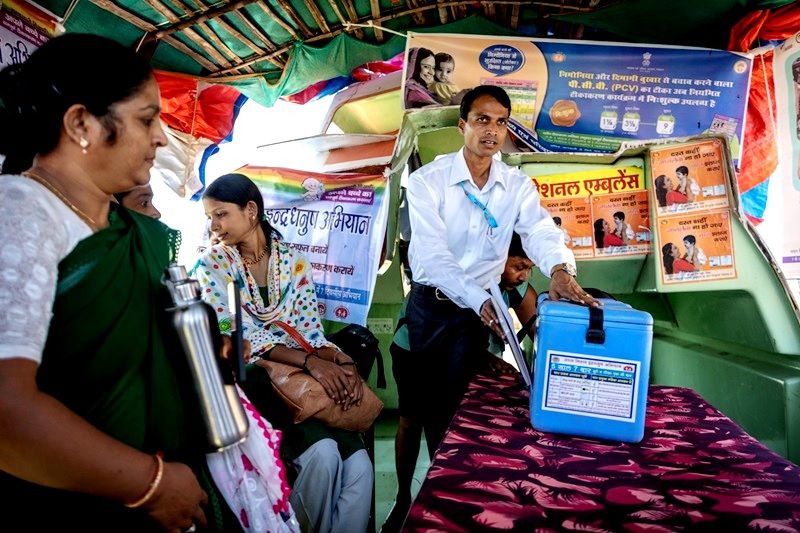 Summers in Alirajpur are difficult with extreme humidity and temperatures touching as high as 44 degree Celsius but these weather conditions are not a deterrent for the determined team of health workers, under the guidance of their DIO, Dr Narendra Bhaydia. (Photo: MoHFW) 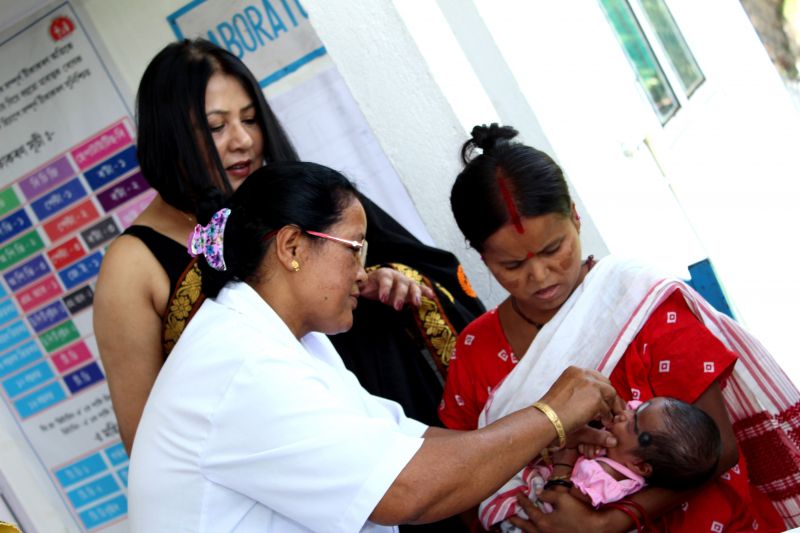 “With the support of my team, Assam has achieved accelerated immunisation coverage from 47.1 per cent to more than 90 per cent and the highest coverage during the Intensified Mission Indradhanush (IMI),” she shares. An avid gardener and reader, she feels strongly about addressing the issue of women’s reproductive health in India, especially in adolescent and young women, as many women do become young mothers in India even before they turn 25.

Uttar Pradesh has been a high priority state under MI, with 12 high focus districts including Bareilly, which had high rate of drop out and left out children. In the recently concluded measles-rubella vaccination campaign in Uttar Pradesh, Bareilly district achieved 99.9 per cent immunisation coverage, without any negative feedback or casualties, due to the dedication and drive of Dr Deepa Singh. 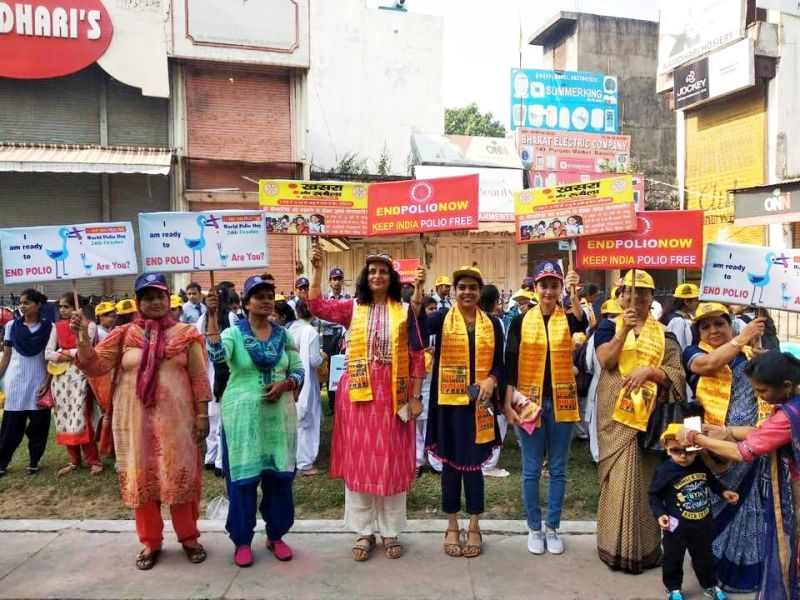 The target set by the government was difficult, with 17 lakh unimmunised or partially immunised children, but Dr Singh, DIO, Bareilly, has been successfully leading the vaccination campaigns for the past two years.“The first challenge we faced was that many parents were scared and sceptical about vaccination. Gradually, we removed the fear from their minds and convinced them. We worked for 14 hours and I feel lucky to have had a dedicated team and partners agencies like WHO and UNICEF, who were also very helpful,” she shares.

“When women take leadership roles, there is a sense of fear and doubt of whether they’ll be able to accomplish the goals or not. With every achievement, I’ve proved that women are not only capable of taking on difficult roles but emerging out as leaders also,”she added.

Talking about breaking gender stereotypes and patriarchal mindset that holds women back, another woman public healthcare official who has done exceedingly is well is Vandana Gurnani, Joint Secretary, MoHFW. Responsible for introduction of new vaccines like rotavirus, MR and PCV in the national immunisation programme and developing a roadmap for a complete 90 per cent immunisation coverage across all states, Gurnani has successfully achieved 18.5 per cent increase in full immunisation coverage under her guidance and implementation of IMI, as per the latest Coverage Evaluation Survey 2018.

Steering the course of the Mission in Himachal Pradesh is Mangala Sood, State Immunisation Officer, who was able to overcome vaccine resistance in many pockets of the region. She delivered immunisation to the diverse population scattered across the difficult terrain of the state, including many inaccessible areas, even blocks that are inaccessible for 5-6 months a year due to climatic conditions. Under her leadership, the full immunisation coverage of the state is now more than 95 per cent as per the Health Management Information System.

While women from the public health sector are directly contributing to the success of MI, there are others diligently working in laboratories to develop vaccines and make them more effective and affordable. Women scientists in India like Dr Deepa Sikriwal, Senior Scientist with Hilleman Laboratories Pvt Ltd, aim to develop affordable vaccines for low and middle-income countries. Passionate about unearthing new developments in the field of public health, Dr Sikriwal’s key strengths lie in analysing key technical aspects of vaccine development.

“Being a woman is beyond her biology and I would like to say that it is her strength, she is a warrior who can usher in change and skilled at art of adapting,” said Dr Sikriwal. Inspired by NASA astronaut Dr Kalpana Chawla, who was also born in Karnal, Haryana as her, she feels that tuberculosis is one of the biggest health challenges for India to overcome when it comes to public health. 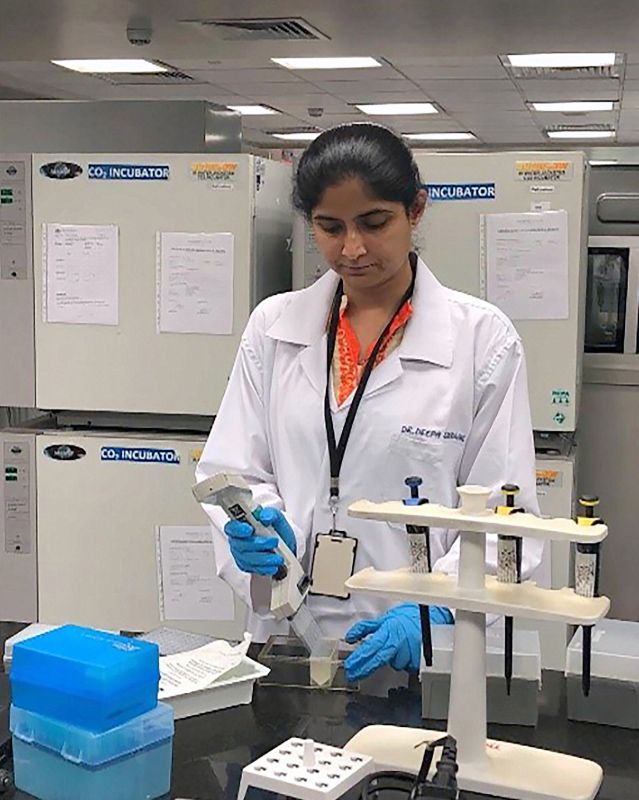 Another senior scientist at Hilleman Laboratories with 12 years of industrial experience in the field of vaccine research and development is Dr Nidhi Shukla, who aspires to develop a vaccine and launch it into the market on her own someday. With a strong interest in the fields of molecular biology and recombinant vaccines, she has previously also worked on the recombinant avian flu and swine flu vaccines. Currently, she is working on a recombinant vaccine for Enterotoxigenic E. Coli and a vaccine for Shigella.

Hailing from Lucknow, both her parents being doctors motivated her to take up a career in science as well. There has been a conscious effort in the past few years to make careers in the Science, Technology, Engineering and Mathematics (STEM) disciplines a greater possibility for women. The theme for International Women’s Day 2019 was ‘Balance for Better’, which aimed at creating a gender-balanced world, which implies that gender equality also extends to employment ratio of the genders in the STEM disciples.

Dr Shukla’s parents acted as her most prominent source of learning. “I used to see how my father cured people and how he touched so many lives. I too wanted to do something for the public health and to give back to the society. This feeling led me into the field of research. I was always encouraged by my parents to be a career woman and they always helped me in my journey of research,” she added.

There is a need to celebrate women's achievements in these academic disciplines and encourage young girls to think beyond their social conditioning and aspire to careers in the STEM subjects. “The effort has to come from the society, from parents to encourage the girls to break the gender stereotypes and get better education. Girls need to be given more opportunities to learn and grow better and spread awareness about the several women, who have achieved and contributed so much in the various fields of science,” Dr Sikriwal concluded.