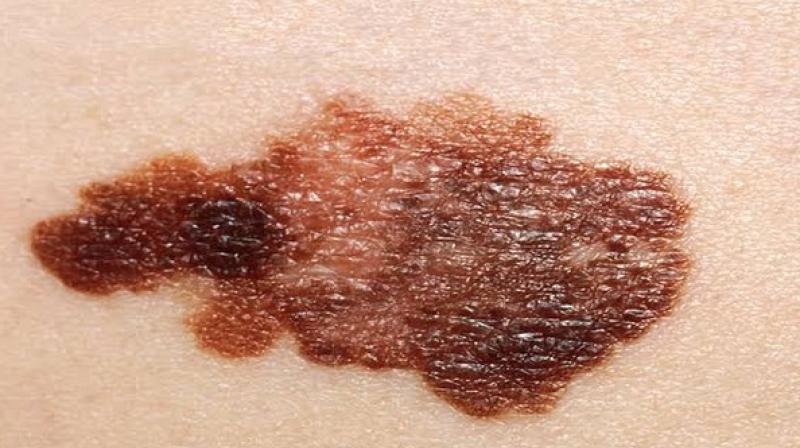 Melanoma is a type of cancer that is typically linked to skin. (Photo: ANI)

Washington: In a new trial, researchers have discovered that a combination of two immunotherapy drugs, ipilimumab and nivolumab, is capable of reversing or preventing the progression of advanced melanoma for five years or more in one in every two patients. These findings were published in The New England Journal of Medicine.

Just 10 years ago, only 1 in 20 patients with advanced melanoma would survive for five years- with many living for just six to nine months. The results from the Checkmate 067 trial presented at the 2019 ESMO Annual Meeting in Barcelona, Spain; represent the longest phase three trial follow-up for checkpoint inhibitor combination therapy.

"In the past, metastatic melanoma was regarded as untreatable. Oncologists considered melanoma different to other cancers - it couldn't be treated once it had spread. This is the first time we can say that the chances of being a long-term survivor of advanced melanoma are now over 50 per cent," said study presenter Professor James Larkin, Consultant Medical Oncologist at The Royal Marsden NHS Foundation Trust and Professor at the Institute of Cancer Research (ICR).

The five-year overall survival rate for the combination of nivolumab plus ipilimumab was 52 per cent, with 74 per cent of those patients treatment-free after five years. The overall survival for nivolumab was 44 per cent, and 26 per cent for ipilimumab. Prof Larkin explained, "By giving these drugs together you are effectively taking two brakes off the immune system rather than one so that the immune system is able to recognise tumours it wasn't previously recognising and react to that and destroy them."

Importantly, for those patients who stopped treatment because of side-effects such as fatigue, skin rashes and diarrhoea, the outcome was just as good as it was for those who were on the combination for longer. One of the key points about immunotherapies is that the immune system can be re-educated even with a short duration of treatment. This is in contrast to other treatments like chemotherapy which can require a full course to be as effective.