In Mexico, skull faces to scare away US-style Halloween

Photos show parade-goers wearing wild, colourful costumes and had their faces turned into that of death itself by expert body painters. 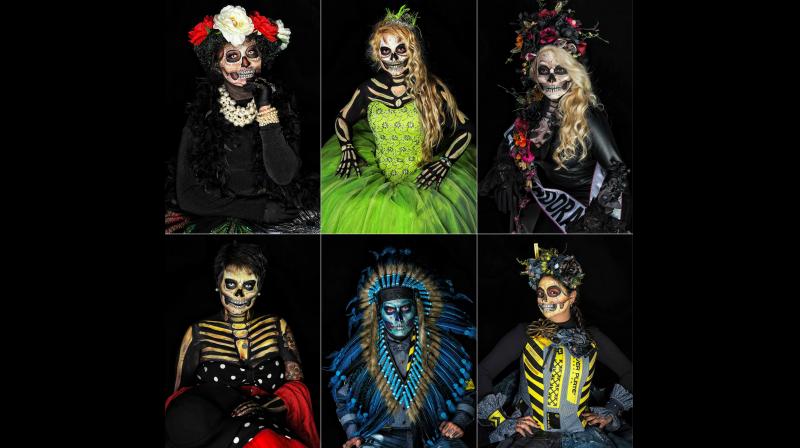 MEXICO CITY - Mexico's Day of the Dead is almost here, so on weekends the streets teem with Catrinas -- people dressed up with elaborate skull faces that recall an old symbol of Mexican political and social satire in a bid to fight an invasion of US-style Halloween celebrations.

AFP took photos of some of the thousands of parade-goers who wore wild, colourful costumes and had their faces turned into that of death itself by expert body painters.

Jessica Esquivias, a procession organizer, was dressed all in black, with a big red-and-white flower arrangement atop a fancy hair-do and a thick string of pearls around her neck. Her skeleton face features huge teeth and eyes.

Last weekend saw the first of several parades planned for the Day of the Dead, which is November 2.

It was the fifth year of these processions, which seek to rekindle Mexican traditions that are under pressure from Halloween festivities.

The Catrina craze started when promoters saw that in Mexican markets, most of the party-oriented garb for sale at this time of year was witch, monster and vampire costumes.

They called in body painting experts to help people dress up as Catrinas at a reasonable price.

So what is a Catrina?

Originally it was the name of an etching by the artist Jose Guadalupe Posada in the early 20th century, as the Mexican Revolution that would topple dictator Porfirio Diaz in 1911 was gaining steam.

The first of these illustrations was of a skeleton, meant to depict a high-society lady wearing only a fancy French-style hat -- a satirical barb aimed at the rich. Diaz was known to love extravagance and all things European. The image was also used to make fun of many other human foibles.

Posada's original name for the caricature was the "Catrina Garbancera," using a term for poor Mexicans who were ashamed of their indigenous roots and tried to come across as European.

The image had a powerful influence on other arts and artists including the muralist Diego Rivera.

In the parade, a reveler named Jossy Javier wore her hair down, a tight-fitting black outfit with a sash like that of a beauty queen, her face decorated with different shades of white and flowers on her head.

Donovan Sanchez, a tall and muscular man sporting tattoos, donned an indigenous-style headdress with feathers in various shades of blue that matched the tones of his striking skull face.

Anna Miller, a German who came to Mexico to live with her Mexican boyfriend, chose something a bit more simple, wearing her hair in the style of the artist Frida Kahlo.