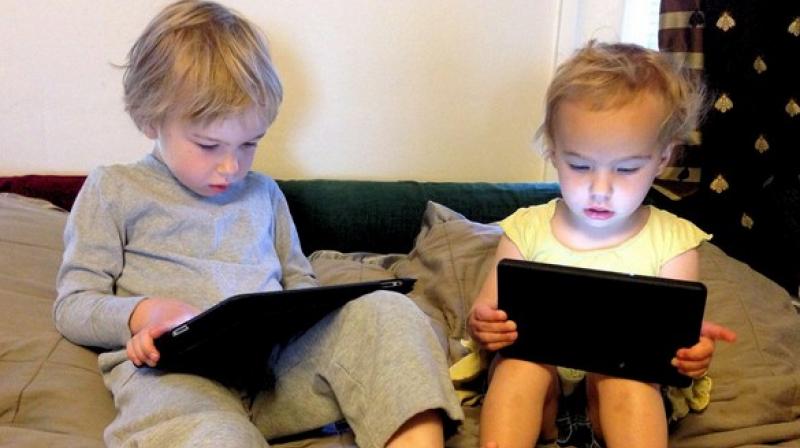 The screen time increased throughout toddlerhood, that is by age 7 and 8, but a fall of usage of 1.5 hours per day was shown. (Photo: ANI)

Washington: Many new findings that conducted recently revealed that the excessive amount of time spent by children in using their mobile phones, or in watching television, can have a severe effect on their development.

A recent study conducted by the University at Albany, the National Institutes of Health and New York University Langone Medical Center, revealed that the average time children spend in front of screens increased from 53 minutes per day at 12 months to more than 150 minutes at 3 years. The time period is beyond the recommendations from the American Academy of Pediatrics (AAP).

The digital media exposure should be avoided for children under 18 months of age, following up the introduction to children of 18 to 24 months of age and also, limiting the usage to an hour a day for 2 to 5 years of age.

The study further stated that the American Pediatric Academy had provided screen time exceeding recommendations for almost 87 percent of children. The usage of screen time by children and the educational qualification of the parents are likely to be interconnected. Children whose parents are holders of only a high school diploma or equivalent are more prone to fall into the category.

Twins were more likely to be the ones belonging to the highest screen time group compared to a single- born child. Also, the research shows that children in home-based care be it provided by a parent, babysitter or relative, were more than twice as likely to have high screen time than the ones in center-based care. The screen time increased throughout toddlerhood, that is by age 7 and 8, but a fall of usage of 1.5 hours per day was shown. The gradual decrease in the screen time is believed due to the time consumed by school-related activities, said researchers.

A further analysis data was made from the Update KIDS, by the teaching, which included Erin Bell, professor of Environmental Health Sciences at UAlbany's School of Public Health. The ongoing cohort-based study tracks the ongoing growth, motor and social development of more than 6000 babies born to 5000 mothers between 2008 and 2010 in 57 counties of upstate New York excluding New York City.

The study co-led by Bell, mothers of nearly 4000 Upstate Kids participants answered the questions on their children's media habits when they were the age of 12,18,24,30 and 36 months of age. Similar questions were responded when the children were 7 and 8 years old. The study further complied with demographic information on mothers and children from birth records and other surveys.

Bell in reference to the collaborative study led at Eunice Kennedy Shriver National Institute of Child Health and Human Development, stated that "screen habits are developing earlier than recommended".

He further cleared that " Given the concern that increased screen-time may impact child development, our results suggest an important need to develop strategies for reducing children's screen time at very young ages to better meet the current AAP screen- time recommendations.