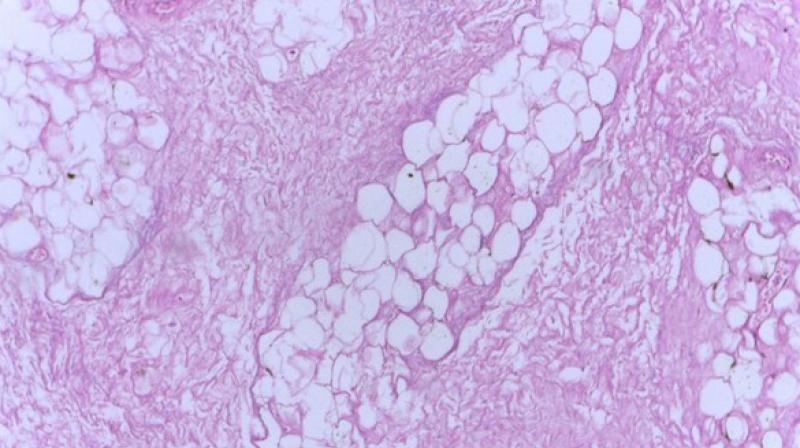 The results also demonstrate how important it is to develop specific mouse models depending on the type of cancer. (Photo: ANI)

Washington: A new study has discovered a method that indicates the prognosis of breast cancer using patients' tumour tissue. Aggressive forms of breast cancer often manipulate the immune response in their favour. This manipulation is revealed in humans by the same immunological 'signature' as in mice, as has been found by the researchers.

This method makes it possible to obtain an indication of the prognosis of the disease using patients' tumour tissue. The results of the study have been published in the journal -- Cell Reports. When a tumour starts to grow in the body, it usually does not go unnoticed by the immune system. Macrophages, a certain form of the body's own defence troops, migrate to the cancer cells. They are supposed to flow around the diseased cells, digest them and thus eliminate them. But sometimes tumour cells manage to escape their adversaries. Not just that! They even use the macrophages for their own purposes and grow even faster as a result.

To do this, they reprogram the immune cells. They ensure that certain genes in the macrophages are switched off and others switched on. This changes the genetic "signature" of the macrophages.

"This changed signature, in turn, reveals whether the tumour has a good or bad prognosis," explains Dr Thomas Ulas from the LIMES Institute (the acronym stands for 'Life and Medical Sciences') at the University of Bonn.

In order to identify the changes caused by the tumour, it is necessary to know which genes are normally active in the macrophages. However, this varies considerably, depending on the organ in which the scavenger cells perform their service.

In addition, tumour-induced changes are not always identical but differ from one patient to another. "Depending on which mutation is responsible for breast cancer, other functions are switched on or off in the macrophages," stresses Ulas.

"We have now searched these animals for the signature of the scavenger cells in the tumours," says Ulas. To this end, the bioinformatics expert and his colleagues isolated macrophages from mice affected by breast cancer and compared them with those from healthy breast tissue.

Researchers have also found almost identical signatures in the scavenger cells of many breast cancer patients. "In this case, it was possible to transfer the mouse results directly to humans," explains Prof Joachim Schultze, head of the Genomics and Immunoregulation team at the LIMES Institute.

"However, the prerequisite was that the patients suffered from the same form of breast cancer as the animals." The results also demonstrate how important it is to develop specific mouse models depending on the type of cancer.

The results can be used not just to predict tumour aggressiveness. After all, the signature also provides information on the cancer cells' survival strategies. This may eventually lead to the development of new countermeasures. "However, it will certainly take many years for new treatment options to emerge if any," adds Alas.