Artistic tightrope and the creative conundrum

The canvases are an interesting juxtaposition between abstraction and realism. 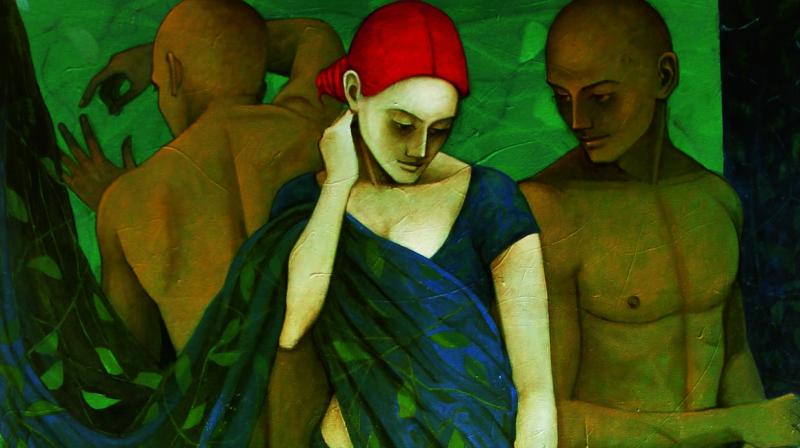 Artist Asit Patnaik has been working on the ‘relations’ series for quite some time now.

There is strange problem with artists and their phases: The art they create in specific phases of their artistic journey, start becoming repetitive. And as Birju Maharaj so famously remarked, “What magic I created within the ostensibly same tala pattern needs a discerning eye of a true rasika!” Not that all art apparently similar can or needs to viewed within the same prism but just a passing thought that flitted across my mind’s eye view in context of seemingly similar paintings.

The other tightrope walking that most of us artists do is related to being recognisable with the art we create. All of us are in the space where we want art audiences to step in and immediately recognise our work among hundred others jostling for their attention. Within this space collectors and buyers want to pick up the so-called signature pieces and if this conundrum was not difficult enough, we don’t want to be type cast. So where does it leave us as creators who need to be financially viable, artistically sound and creatively lively — mostly confused trying to figure it all out! And mind you this is every artist’s battle with the self before their creations are even created, let alone shared with audiences. It needs a much higher intelligence quotient to figure it all out and make it work.

Artist Asit Patnaik has been working on the ‘relations’ series for quite some time now. It will be interesting, therefore, to explore the kind of selves articulated into the newest batch of works of the series that he has named Radiant Relations that is currently showing at the Jehangir Art Gallery, Mumbai after a successful showing in New Delhi. To begin with, there is only one figure — male or female — claiming the central position in a majority of works. The other figure — or figures — hover in the background, in juxtaposition with characteristically intense networks of lines and shades or constituting the backgrounds themselves. It is these very textures that indicate the space the protagonists inhabit for Asit assiduously works on these textures and attempts to create anew in every series, even though the central characters remain similar. 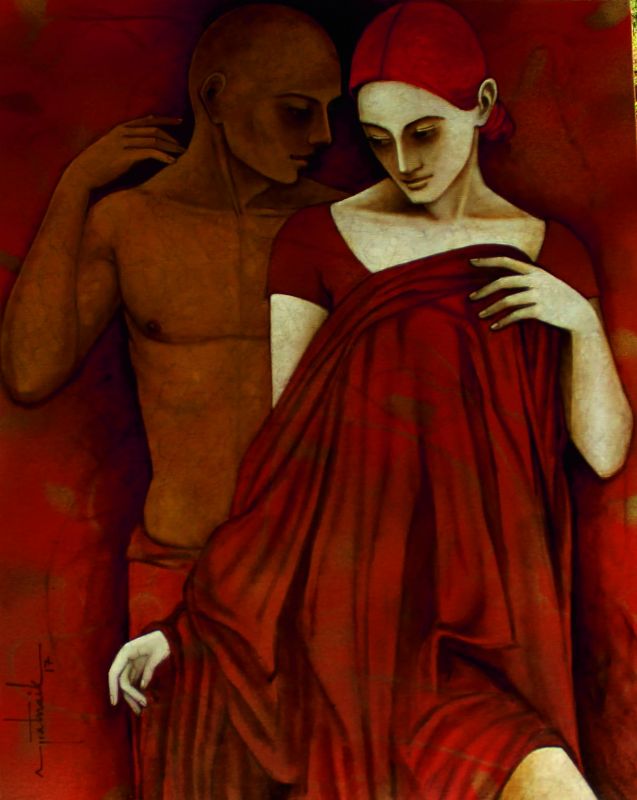 Intriguingly, the woman figure appears to claim greater attention in the new set of works. This is definitely a prominent feature in his work. It may well have stemmed from a subconscious impulse for he had once credited it to a deep admiration for his mother, who had courageously taken the reigns of the family after his father’s premature death. It may also have something to do with his belief that women have the resilience to face any adversity, with their unique calibration of vulnerability and strength. The woman in this series is bold, colourful and forthright. She is ready to face any dare, even as she celebrates her very reality. The attentive, meditative and reflective self for once is matched by an abandon and audacity that calls for a direct tryst.

The canvases are an interesting juxtaposition between abstraction and realism. The female form is mysterious and surreal and his canvases have a tale to narrate. It is up to the viewer to read it according to his or her perspective for the work inhabits a grey zone. The popular perception about the connotations of grey has changed over time. In the past, grey stood for something mysterious, something that common intelligence found hard to understand. For quite some time now, there has arisen a welcome comfort with divisiveness and a corresponding honesty to ambivalence. Nothing, it would appear, is any longer fit to be perceived as either black or white, but exists within the greys.

Subsequently, however, there has been expansion of categories. Films with ambiguous characters, books with unsettled protagonists and plays with unstable trajectory have over the last decades attracted greater popular acceptance. Indeed, there has been a greater understanding of the inescapability of ethical ambivalence and popular accommodation of grey as an acceptable idea.

In Asit’s frames, the greys are often overwritten by vibrant colours. The man and the woman now wear deeply highlighted selves. Depth and colour appear to call forth for a great deal of passion, intensity and vigour. Their strength is no longer implied, but self-assuredly perceptible, even if controlled. It is this easy shuffle between the obviously full-blooded and the carefully restricted that makes these works some of the most mature in his oeuvre.

What is particularly alluring about Asit’s men and women is their microcosmic scale, they can alternatively convey impressions of joy, sorrow, love, indifference, familiarity as well as inscrutability. They relive potentialities, they entail pensive pasts, they call up imagined futures and they even interrogate their own selves and suppositions.

Yet, it is the openness of these works that makes them particularly eloquent. Patnaik’s figures of man or woman exceed the boundaries of their immediate situation. Sparsely clothed, they appear against a highly textured background. The background itself is evocative, with layers of lines mounted with immense fervour and legerdemain. The density of the background sits in contrast with the minimalist expressions of the figures themselves.

The figures still struggle with possibilities unexplored, and pasts unrealized, but there is greater abandon in the way they measure each other these days, a delightful disregard to the externalities glowing through the complicated, but bold, background abstractions. The brightness is best seen resonating with a soft autumnal glow, born out of an appreciation for the good things of life without having to compromise on quality.

The writer is an artist, art writer and curator and can be contacted at alkaraghuvanshi@yahoo.com