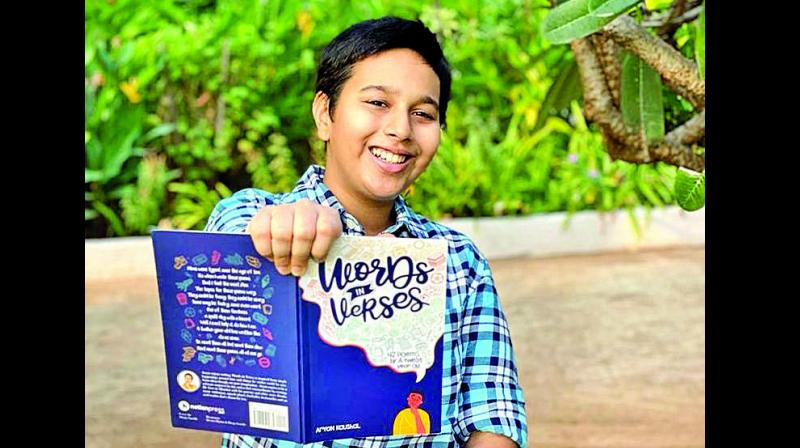 “I never wrote my poems with the idea of writing a book. I just wrote when I had the time and was feeling like writing, or if any idea popped up in my mind,” says Aryan, who started writing poems at the age of 10. “It was on and off when I was 10, and then after two years, I took that seriously,” he adds.

Inspired by mundane things and conversations around, Aryan imagined instances he wished could be true. His compilation of 42 poems touches upon topics like artificial intelligence, the importance of going green, and other current affairs. The little poet also showcases his child-like mind by summarising Harry Potter, his annoying alarm clock, his relation with history books, and his interaction with an auto-rickshaw driver, among many other small incidents. While his imaginative words bring about a sense of nostalgia, the mature morals of each poem indicate a sense of responsibility.

“I wrote whatever I felt. I never took any burden and whatever inspired me, I started putting it down. I was inspired by the current affairs and the conversations my parents would have, and then I would use my imagination,” shares the poet.

As a grade eight student, Aryan spends most of his time in school and learning keyboard. He has a keen interest in playing squash and spending time converting his ideas into poems. “Generally, it’s the evening time when I write. If I get any idea any time of the day, I just write it down in a minute and when I am free, I shape it as a poem,” says Aryan. When asked if his school timings disrupt his creative pursuits, he confirms that the school is his first priority.

“School is always my priority. If I am doing my homework and I get an idea of a poem, I will quickly take out a minute to write it down, and get back to the homework. I never sacrifice school work for poems,” he shares.

Although Aryan got his initial inspiration for writing from existing poems, it didn’t take him long to turn to current events to seek more inspiration. “I got inspiration from the old and existing poems and started writing similar poems. But then I started focusing on current affairs in TV shows and songs that I connected with and I wrote about them,” explains the poet, who sees himself as a writer and is already working on his next book, which promises to be a series of cliffhanger thrillers. Nevertheless, he also aspires to become a software engineer.

“I love the ability to learn to code and create new things. It is interesting and I love the logic behind coding, so I want to explore it more,” he says, adding that he loves food and cooking, “So I want to be a software engineer in day and chef at night,” he laughs.