Watch: Terrifying moment man is attacked by lion in front of screaming onlookers

Owner, Mike Hodge was rushed to hospital with injuries to neck and jaw following shocking incident caught that was caught on camera. 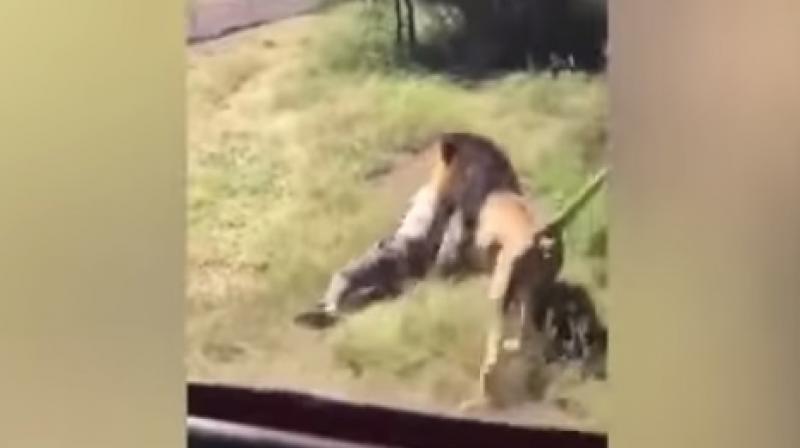 Terrifying moment lion savagely attacks elderly man in an enclosure and drags him across the floor, (Youtube Screengrab/ Daniel Kalemasi)

A video has gone viral where a 67-year-old man was mauled by a huge male lion in South Africa. The British man is the wildlife park's owner.

The owner, Mike Hodge was rushed to hospital with injuries to the neck and jaw following the shocking incident caught that was caught on camera.

The viral video of the attack, filmed at the Marakele Predator Park in South Africa shows Hodge entering the lion’s enclosure, where soon enough, witnesses watch in horror as the animal pursues him towards the metal door of the pen and drags him back.

The park is believed to be nine kilometers from Thabazimbi.

Onlookers scream as he is dragged back by the beast. The hulking animal claws at the man - who goes limp in its grip.

The lion drags the man farther into the enclosure, into some bushes and onlookers scream for help.

Suddenly a shot rings out - thought to be from a warden's gun and the big cat drops its prey and runs for cover.

A woman is heard howling in horror at what she has just witnessed while another man is heard shouting 'get a rifle'.

The big cat is thought to have been put down in the wake of the grisly attack.

Marakele Predator Park was established in 2010 by Mr Hodge and his wifer Chrissy after they emigrated from the UK, according to its website.

Their current site has over a dozen big cat, including white lions, cheetahs and two Bengal tigers.