Hidden in the bylanes of Marol and spanning 6,000 sq. ft., Maker’s Asylum has four fully functional labs that let’s you invent and innovate. 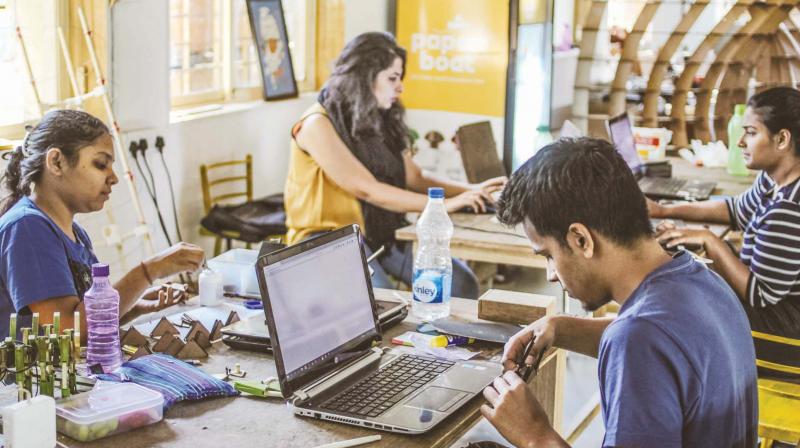 A community-based co-working space, the Maker's Asylum has successfully been propagating maker culture in the city since 2013. It gives people bitten by the creativity bug a space to master their talents in woodworking, electronics, 3D printing and laser cutting.

Vaibhav Chhabra, the founder of Maker's Asylum, describes maker culture as the coming together of people who like to build things. “People love building stuff - be it in the form of cooking, origami, building a car, or designing a beautiful aeroplane. The idea of being able to do stuff by yourself is what maker culture is all about? It's bringing people together to do what they love to do.”

The Asylum, as its regulars call it, started out as a non-profit foundation. It all began when Vaibhav got together eight people to fix furniture that had become damaged due to the falling of the ceiling of his then-office. What started out as some recreational repair activity, gave impetus to their hidden love for carpentry. Today, the Asylum operates as a start-up that not only provides people with the space and tools for their creative pursuits but also conducts regular workshops to equip people of all ages and backgrounds with skills and resources.

“It started with the idea of sharing tools and knowledge with likeminded people; learning, teaching and working together has been the core essence of this place,” Vaibhav says, adding, “It's beautiful to see people with different backgrounds collaborating. The other day, one of my friends was here making skateboards, and another friend's wife, who does marble painting, was also here. They got together and made marble-painted skateboards. It's so exciting when two different worlds, which would not have met otherwise, collide.”

If you happen to pay it a visit, you’ll find the Asylum teeming with artists, designers and engineers working on their creations. The décor, all of which has been hand-made by the makers themselves, includes a leather world map, a wall hanging made of old vinyl records, a wooden lamp and an electric bike.

You may also run into former software engineer Viren Vaz, who joined the Asylum to pursue his interest in woodwork not knowing that he'd soon be quitting his job to follow his passion. Today, he's a freelance woodworking instructor that conducts workshops under the name V for Wood and the maker of the wooden tables at the Asylum. “It became my second home. I would take the day off work at the drop of a hat to be here. I built some tables - the first pieces of furniture that I made - and it was quite a feat to make something big and sturdy, that too, without using any nails! This is a place where people understand you and let you be who you are,” Viren says.

Another familiar face is Girish Malage, the former space manager of the Asylum, who joined the organisation after graduating with a degree in architecture in 2016. Not only did he find his passion for woodwork and 3D printing at the space, but he also but also built his portfolio. Now, he's preparing to leave for the Netherlands to pursue a master's degree in Industrial Design.  Talking about his experience, he says, “It was my first job out of architecture school and I started building my own products, including handbags. I got an amazing push from this place. Here, you gain an understanding of machines, how things are built, and the prototyping process. You become intimate with the materials and the tools; you understand them. You don't just build things, you become one with them.”