The sky’s the limit

Dr Chandrakanta is responsible for the crucial radio frequency between the spacecraft and Earth station. 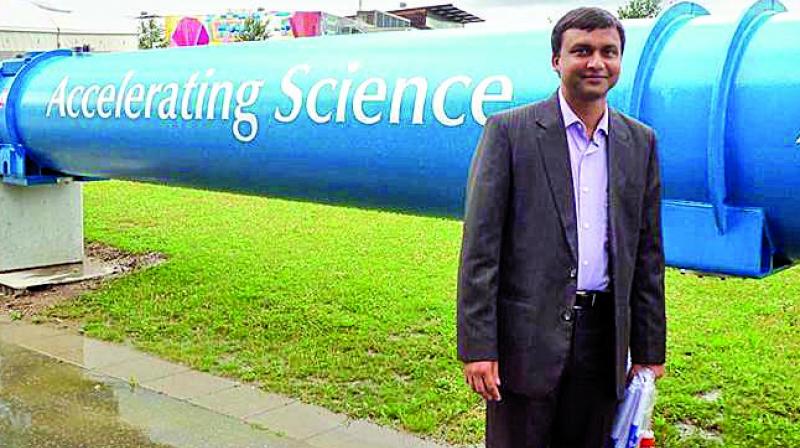 From his humble origins as a farmer’s son to becoming a key scientist in the launch of Chandrayaan-2, Dr Chandrakanta of ISRO has sure come a long way.

In what seems to be the case of a remarkable coincidence, an impoverished farmer who wistfully named his son Chandrakanta after the moon, had his dreams fulfilled when his son incredibly grew up to be a scientist involved with Chandrayaan-2 — India’s spectacular Moon mission.

As Deputy Project Director at the Indian Space Research Organisation (ISRO), Dr Chandrakanta heads the electromagnetic section of the UR Rao Satellite Centre at ISRO, and is responsible for the crucial radio frequency between the spacecraft and Earth station, which is central to the success of the space programme.

On July 22, as the majestic Chandrayaan-2 took to the skies and made headlines around the world, his jubilant parents spent the day hugging their neighbours in celebration.

Madhusudan Kumar from Shibpur, a town near Kolkata, dismisses the implication of the name bearing any significance to his son’s career, but narrates an interesting anecdote related to the same.

“I had originally named my son Suryakanta after the Sun. But while registering the name at school, a teacher asked if I was sure about it as it would last him for life. The enormity of the decision struck me. It seemed too big and too ambitious a name. So I decided to change it to Chandrakanta. Since I had no idea he would become a scientist back then, I’d like to believe it is a mere coincidence,” narrates the 65-year-old farmer with a smile.

Madhusudan remembers his elder son, born in 1976, as a bright student who always topped his class. But in Class 8, the family fell on especially hard times and had to reconsider continuing his schooling.

While Madhusudan contemplated having his son help with farming, his wife, Ashimarani put her foot down, and remained adamant that they sell off all their valuables to support his studies.

Thus, Chandrakanta went to Khajurdaha High School at a neighbouring village — since his school was only till Class 8 — cycling the two kilometres distance to and fro and topping his class yet again.

He then pursued BSC Honours in Physics at Ramakrishna Mission Vidyamandira in Howrah after winning a part scholarship and taking up teaching on the side to support himself.

This was followed by an MSc and MTech from Raja Bazar Science College in Kolkata, before he joined ISRO in 2001. Five years later, he went on to complete his PhD.

Today, the senior scientist is a proud father of two young girls and is settled in Bangalore.