An ode to her father

Two years ago, for the first time, Reshma stepped into her father’s shoes, and since then she hasn’t looked back. 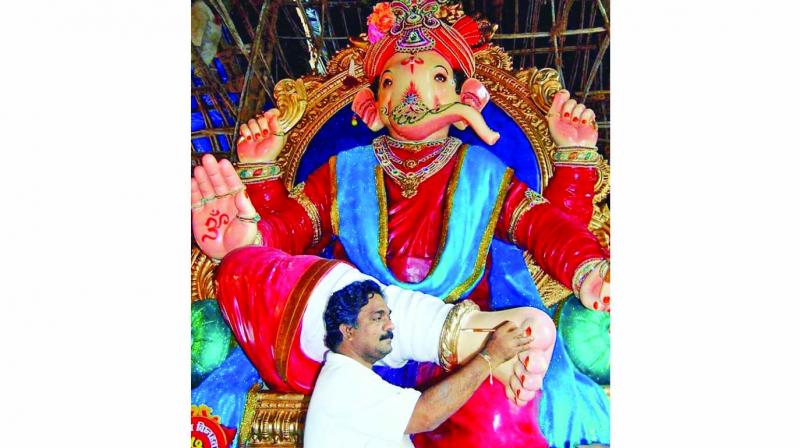 After Mumbai lost its favourite murtikaar just a month before Ganeshotsav in 2017, Vijay Khatu’s daughter Reshma had a daunting task ahead of her. The final touches to the idols were yet to be made and the deliveries were to be sent out, but despite grieving the sudden demise of her larger-than-life father, Reshma stood undeterred and completed the remaining work and sent out the deliveries. Two years ago, for the first time, Reshma stepped into her father’s shoes, and since then she hasn’t looked back.

Vijay’s expertise in making large-sized Ganesha idol and his craftsmanship in detailing created a brand for the Khatus of Lalbaug, but Reshma informs that it was her grandfather who first stared making murtis. “I am the third generation murtikaar, we all have done the same thing.” In fact, she relays her family legend that is proudly being passed on from generation to generation that their business is exactly as old as independent India. “On August 15, 1947, the first Independence Day, my grandfather sold his first Ganesha idol, and since then we have not stopped. It has been 72 years now,” she claims proudly.

Her grandfather, Ramkrishna Vishwanath Khatu, started off with making small clay Ganesha idols for households and taught the art of sculpting to his son and Reshma’s father. Vijay then entered into the tutelage of famous sculptor Dinanath Velling, whose famous 1985 Sheshnaag murti was refurbished into the public conscience in 2017’s MumbaiCha Raja, Ganesh Gulli. The fame reached the house when Vijay started making idols as tall as 28 feet. But there was more to Vijay’s idol than their colossal size.

“My father’s expertise was in the balancing job aspect, which is when a sculpture is balancing on either on one foot, toe, or is hanging in the air,” she says adding that he was also known to give Ganesha idols human characteristics. “He was able to give the idols body characteristics that we, as humans, have got – the same kind anatomy, body language, and expressions were given to the Ganesh idols,” she reveals.

Hence, when the 34-year-old Reshma grabbed the reins of her father’s workshop, she chose to stick to his designs – the trademark of the Khatus. Moreover, the team of 100 craftsmen chose to keep working for her, which helped her continue her father’s designs.

Additionally, what really helped Reshma manage the intimidating task of creating and delivering more than a hundred idols from as small as six feet to as large as 26 feet were the memories of her childhood and her father. “I remember my house would always have that festive environment of Ganpati. We did not have any other businesses. Ganeshotsav may be a seasonal affair, but in my house, all the 12 months were dedicated to it. This is my third year handling the business; it would not have been possible for someone else to step in. But, because I would always be around my father, listening to his experiences and his discussions, it was like reading half of the instruction manual at home while growing up, so it was relatively easier for me,” she recalls.

However, Reshma may have stepped in the big shoes of her father and grandfather, but she acknowledges that there is a certain weight that comes along with it. “My grandfather and my father, together, built an identity for themselves. Their names are still taken with reverence in this business and craft, and my father is still considered to be a guru to many murtikaars of our time. I am very proud of their legacy, but it comes with a huge responsibility as well,” she says. Adding further, she concludes, “So my only responsibility is to maintain that identity and reverence. It’s too far fetched to think about taking that legacy further, but my job will be done if I am able to maintain it for now.”