Rocking to a different beat

A combination of percussion instruments - Dhol-tasha has a leather coating and is played with a bamboo stick. 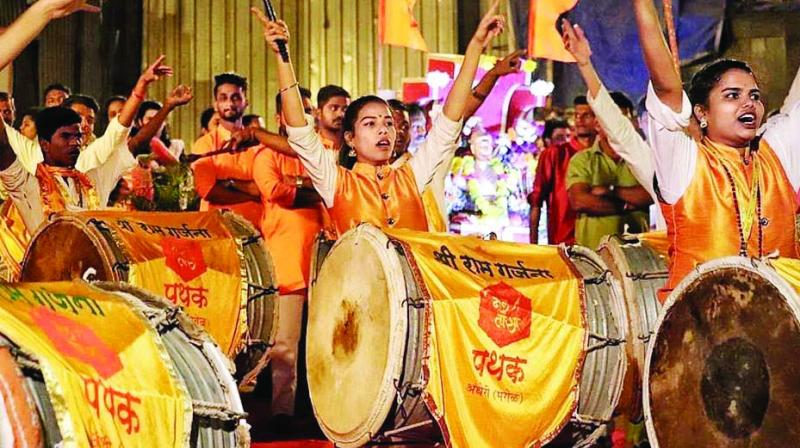 As the whole state of Maharashtra reverberates with anticipation of its most-awaited festival Ganeshotsav, one can see bands of youngsters huddled under city flyovers and open spaces, practicing for the ten-day event.

As the whole state of Maharashtra reverberates with anticipation of its most-awaited festival Ganeshotsav, one can see bands of youngsters huddled under city flyovers and open spaces, practicing for the ten-day event. Despite their busy work schedules and negligible monetary benefits, these youngsters are bound by passion, which keeps them motivated to travel from far away places and practice in their spare time.

“I only have Sundays off, so I practice for eight to nine hours on weekends,” says Suraj Pawar of Shivarambh Dhol Tasha Patak group from Chembur. Suraj who is playing dhol-tasha for last seven years, lives in Marol and works with an insurance company. For him, it is almost two hours travel to go for the sessions under the Mankurd flyover with his 90 team members, including 15 girls. Similarly, 25-year-old Abhishek Gujar travels from Nerul to Malad as his group of 100 can be seen drumming up the tempo under Samtanagar bridge. A computer hardware engineer by profession, it’s his passion that keeps him going through the mundane workings of life. “It’s a different feeling and you just stand out in the crowd. Although I have to travel a lot, my love for the sound of dhol rejuvenates my soul,” smiles the performer.

A combination of percussion instruments - Dhol-tasha has a leather coating and is played with a bamboo stick. “I used to see videos on YouTube and television of people playing dhol on the streets and that would give me goosebumps.

I used to feel so thrilled listening to the different variations of music through dhol. So a few years ago, I joined the group from our area,” says Rahul Sawant of Ram Garjana Dhol tasha pathak in Andheri east. Being a corporate employee, Rahul works in shifts and doesn’t have fixed offs while other members have holidays on Saturday and Sunday. But it is his dedication that keeps him going. “Every team member supports when they know that you have a genuine problem. I joined just for the heck of it but just after one performance, this has become my passion and I feel connected with people and my culture,” he adds.

According to Prasad Pimpale, the founder of Swargandhar, a Puneri dhol-tasha group in Dahisar, playing dhol-tasha is a systematic work. It involves a certain rhythm that also helps in developing the performer’s overall personality. “It helps in building team spirit and discipline, besides inculcating cultural values,” says Prasad, who participated in European Union of Folklore Festival (EAFF) in Spain, last year.

Generally, the dhol sequence has five to seven beats with which these pathaks come up with their own variations. “We perform powadas (folk songs of Maharashtra) and tandavas. Most of our performances are a combination of folk stories and music,” says Prasad. To which Akshay adds that improvisation is an important part of the performance. “You have to make it interesting for the people so that they can stop for your performance. And moreover, this is for yourself,” says Akshay – a travel operations consultant from Kurla, who plays the puneri dhol-tasha which is a freestyle dhol and much bigger in size.

These pathaks start practicing three months before Ganeshotsav on their work offs but as the festival comes closer, the team members practice for more than three hours daily. “When we meet, we decide a certain tune and we improvise as per the instructions,” says Suraj.

The last few years have also seen girls coming forward to be a part of these groups. 28-year-old Ankita Inamdar is the first girl to join dhol-tasha group Swargandhar when she was 23. “This is the only thing that I can do. I am not creatively inclined and was just doing a regular job, so playing dhol gives me energy,” says Ankita, who works in the aviation industry for last four years. Similarly, Tejal Mistry of Shiv Brahmand Dhol Tasha dhwaj pathak group from Ghatkopar also follows the same routine of six days’ job and practices on Sunday evenings under Ghatkopar bridge. “Playing dhol is an addiction, you can’t just get away from it. It is rejuvenating when you come from work and then you know that you have rehearsals,” says Tejal.

As of now these girls have mastered the art of matching the energy of other male members of the group, and the male members schedule their practice sessions and help them reach home safely when it is late. “We, at times, finish at midnight and the boys ensure that all the girls are dropped home safely,” assures Ankita. When asked if they faced any apprehensions from the family members or society, the girls respond in negative. “I have all the liberty from my family. They never stopped me from playing dhol,” says Tejal and Ankita adds, “Although we aren’t getting paid from this, and at times gets late at night, my family still supports me.”