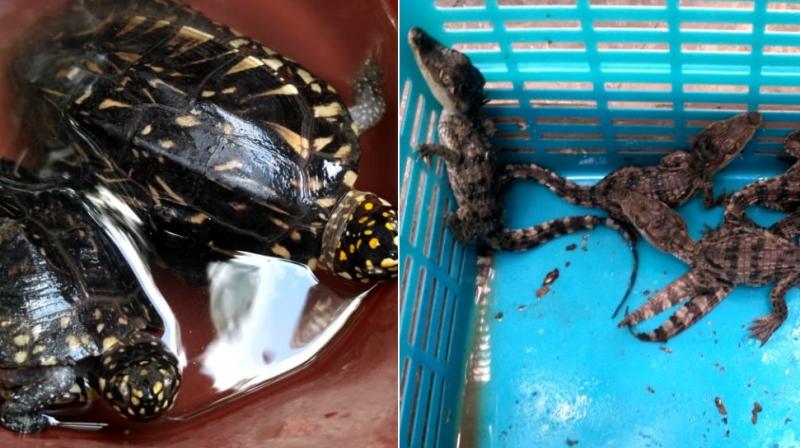 The crocodiles were found to be malnourished, subdued, and weak. The animals are currently recovering at the Nashik City Police's Crime Branch office.

Nashik: Acting on a tip-off, People for the Ethical Treatment of Animals (PETA) India, officials from the Nashik City Police's Crime Branch, and members of the Wildlife Welfare Association (WWA) worked together to rescue 10 wild animals – eight juvenile Indian marsh crocodiles and two black pond turtles, both of which are protected species under Schedule I of the Wildlife (Protection) Act, 1972 – who were apparently illegally captured and traded.

The crocodiles were found to be malnourished, subdued, and weak. The animals are currently recovering at the Nashik City Police's Crime Branch office, where they are receiving necessary veterinary treatment and care, and they will soon be handed over to the Forest Department. The alleged smugglers, Faiz Kokni and Saurabh Gholait, have been arrested, and a First Information Report has been registered under relevant sections of the Wildlife (Protection) Act, 1972.

"PETA India worked swiftly alongside Crime Branch officials of the Nashik City Police and members of the WWA to rescue these animals, who might otherwise have been starved, tortured, and turned into a cruel exhibit for human entertainment," says PETA India Emergency Response Coordinator Meet Ashar. "This incident is exactly why laws exist to protect wild animals from being smuggled or illegally traded, and it's imperative that humans heed such legislation to prevent these species from becoming extinct."

PETA India thanked Nashik City Police Commissioner Shri Ravinder Singal, IPS, for his prompt action and response to this serious matter. The group also commended the efforts of Senior Police Inspector Dinesh Bardekar and his Crime Branch team for making this rescue a success. Aditya Patil, Aniket Kadam, Omkar Kolekar, and Nikhil Mahajan of WWA, a non-governmental organisation that works for the welfare of animals, contributed immensely to the operation.