The advertisement for a product called stay-on called on people to “stop whining, stop complaining. Just stay on” 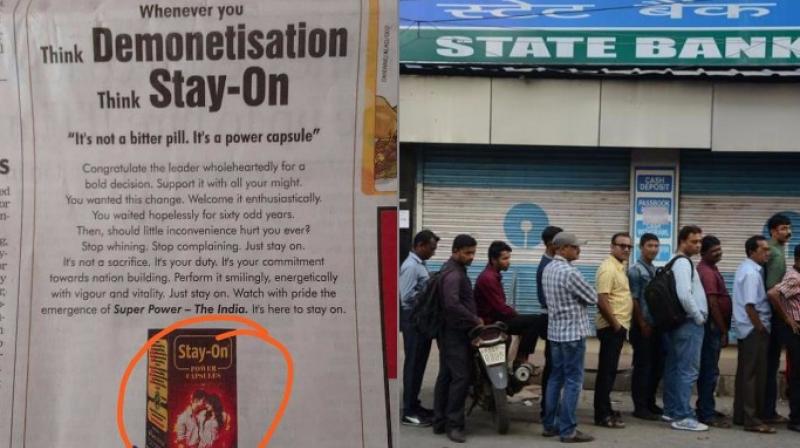 Demonetisation of Rs 500 and Rs 1000 currency notes called a step to curb black money and corruption, has divided the population among three groups with a section opposing it, a large chunk complaining of mismanagement and another one rallying after the decision.

But as people are queuing up outside banks and ATMs for hours, weeks after the announcement, brands are cashing in on the opportunity, with some like e-payment platform Paytm coming under fire multiple times, be it featuring the PM in an ad or coming up with an ad that tagged complains of inconvenience as a drama.

The latest brand to make headlines for a controversial marketing campaign around demonetisation is strangely a sexual wellness product called ‘Stay-On’, as it draws comparison between the pill that allows men to last longer and the move which is said to yield benefits in the longer run.

Stay-On! Capsules for Sexual Power.
This ad by Stay-On makes sense for a party who is Fcuking the democracy. pic.twitter.com/A9CcyKC4DF

The text goes on to state that “this is not a bitter pill, this is a power capsule” perhaps hailing the move as a bold one, and asks people to “stop whining, stop complaining. Just stay on”, which takes aims at people talking about inconvenience caused by demonetisation and ends with saying that it’s not sacrifice but is instead a duty that you should, “Perform it smilingly, energetically with vigour and vitality. Just Stay On.”

The interesting copy created a buzz on Twitter as users started giving their interpretations of the text and also came up with future predictions about the brand’s marketing ideas.

How to get a hard on? Think #DeMonetisation pic.twitter.com/gMXgtTEbu3

Stay-On's next ad will be about standing up for the anthem. 😂

In any case, demonetisation seems to have brought the product under the spotlight, while it’s not clear how much longer the public’s patience can stay on. It might also come in handy after a long hard day spent lining up in the sun.