Aerial Silk, also known as tissue or fabric is one of the newest, yet most awe inspiring and versatile art form. 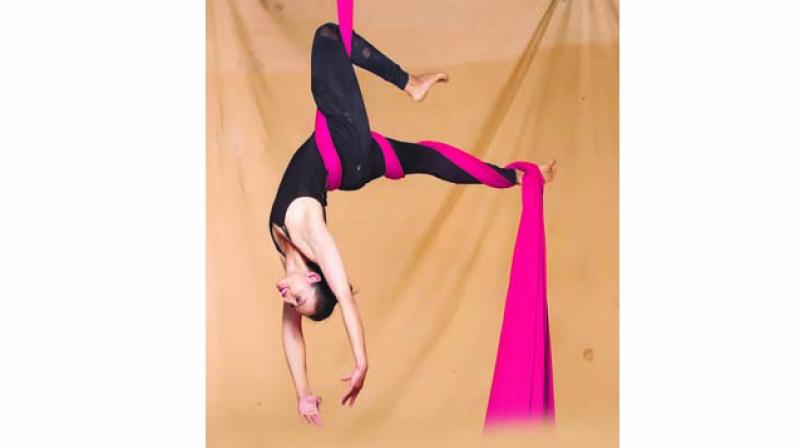 Aerial Silk, also known as tissue or fabric is one of the newest, yet most awe inspiring and versatile art form.

Recently, I was invited to judge an Aerial silk championship, at first I was hesitant to give my nod for it because I was not sure what a Latin and Ballroom like me would do as a jury for Aerial silk competition, but on insistence of my dear friend actress Smilly Suri, I agreed for the same and I am glad and thankful to Smilly for persuading me go say a yes for the same, because it was an evening that has left some wonderful memories in my heart.

Aerial Silk, also known as tissue or fabric is one of the newest, yet most awe inspiring and versatile art form. It gives a completely different adrenaline rush as you are performing all the moments in the air and against gravity. The variety of moves, drops, wraps, twists and turns are practically endless and create an ever-intriguing challenge. Earlier, this art form was only used as a performance act, but today it has gained popularity as a dance and a fitness workout. It is performed without a harness and one needs to rely on his/her own strength and skill. It helps develop strength, flexibility, stamina, neuromuscular coordination and a variety of motor skills and of course adds style and grace to ones personality like any form of dance would do.

The championship was organised by the affable Aditi Deshpande. This super flexible artist is the founder of Fly High Aerial Art, who is a trained gymnast and professional Mallakhamb performer. Having learnt ‘Rope’ from the age of 5 under the guidance of the respected guru, none other than her father Uday Vishwanath Deshpande while taking inspiration from her mother’s artistic background, Aditi passionately pursued her career in the field of Aerial Arts. Her thirst for learning and further improvising on her skills took her to San Francisco to further evolve as an Aerial Silk instructor.

She has been teaching ‘Rope Mallakhamb’ for over 15 years and ‘Aerial Silk’ for 4 years at Shri Samarth Vyayam Mandir, Dadar. Aditi has trained aerial enthusiasts from Germany, UK, United States of America and Mauritius.

She does have a few international performances under her belt in addition to being a winner of 20 Gold, 15 Silver and 10 Bronze Medals in District, State and National level Championship with the most prestigious state level award, Shri Shiva Chatrapati Award in her cabinet all at the age of 21. She has also trained Bollywood Diva the sensational Sushmita Sen, Smilly Suri and many more.

You have trained in rope and mallkhamb which is a traditional forms then, what made you take up silk?
Well, yes! I have been training in Mallakhamb since the age of 5. Since childhood, I had a goal of achieving the Shiv Chatrapti Award which is the highest level of state level Award given by Maharashtra government. And since then my journey began to achieve it. I played almost 10 district, state and national championships and achieved numerous Gold,silver and bronze medals. Mallakhamb further helped me to be the best in all the other sports, to name a few, are running, high jump,long jump etc. I always came first. Mallakhamb also gave me lovely experiences to travel the world and teach students abroad.

However, after reaching my goal of receiving the Chatrapati award, I needed something else to motivate and energize me. Nothing was challenging or exciting me. I even tried my hand at working in a bank but was not satisfied as I am not suited to a desk job of 9-5. And then, due to personal reasons, I got an opportunity to visit USA, for a duration of 3 months. Since I had so much free time there, I chanced upon finding classes for aerial silk. That got me excited. I enrolled and trained for 3 months and found my new passion which is similar to what I always did. Since then, there was no looking back.

Rope and silk being similar what is more difficult and challenging out of the two?
Yes, it is similar with respect to the skill set required, but very different in terms of the sport. In Mallakhamb we have to perform 20 elements in 1min 30 sec and hold positions for a few seconds. Speed is of key importance. Hence, when I begin to train in silk I had to relearn everything.

Sandip Soparrkar is a well known Ballroom dancer and a Bollywood choreographer who has been honoured with two National Achievement Award and one National Excellence Award by the Govt of India. He can be contacted on sandipsoparrkar06@gmail.com