Need no harness to succeed

In a world that believes that sugar coating speech leads to success, for some achievers, aggression in their words and attitude has worked. 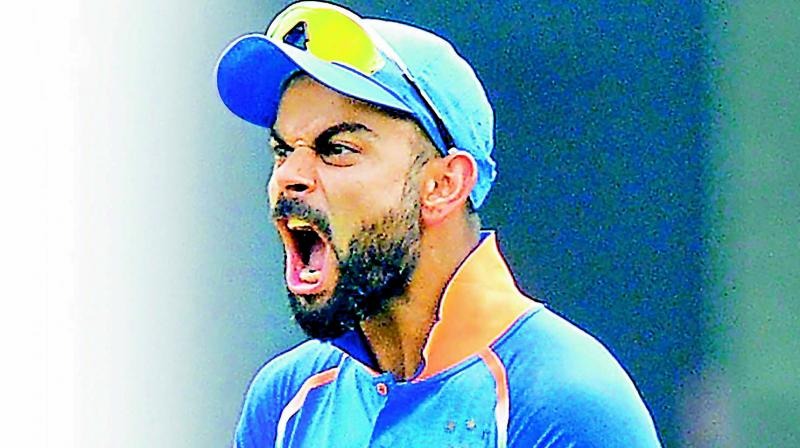 What’s common between Virat Kohli, skipper of the Indian cricket team, Telangana Chief Minister K. Chandrasekhar Rao and actor Vijay Deverakonda? They all continue to be what they are — naturally aggressive. Despite people repetitively slamming their attitude, success has not eluded them, and they are only growing stronger.
Consider this: The Indian team’s test victories (the latest one against Australia in Melbourne) clearly show that India enjoys playing under Virat Kohli. However, as much as Kohli has been lauded for his performance, his behaviour has constantly come under the scanner. Several ex-cricketers have appealed to Virat to mellow down, and said that his behavior isn’t right for the gentleman’s game.

Former India cricketer Arshad Ayub, however, defends Virat’s behaviour, pointing out that while aggression comes to him naturally, he has never gone overboard.

“If you are going to get bogged down, then the players’ mindset will be disturbed. It is Virat’s passion for the game that makes him naturally aggressive, and that’s how he should be. Moreover, it is controlled aggression. He’s not abusing anyone, so the way he gives it back when someone comes at him is pretty cool,” says Arshad.

Closer home, the manner in which Telangana Chief Minister K. Chandrasekhar Rao has come under frequent criticism for the way he describes his counterparts. A couple of days ago, the way he went about criticising Chandrababu Naidu (Chief Minister, Andhra Pradesh) and calling him ‘the dirtiest politician’ has become a talking point.

Kishan Reddy, former BJP leader feels that it is not healthy to use such language on a public platform.  He adds that it was high time political parties understood the significance of addressing counterparts in a dignified way.

“KCR even called PM Modi sannasi (unfit), but I never speak and address anyone like that,” shares Kishan Reddy, adding, “Not just KCR, there are several other politicians who use demeaning language on public platforms. People have already lost faith in political leaders, and it’s time parties look into it.”

Former TRS MP Balka Suman however thinks that KCR is a straight-forward leader, adding that he finds it weird that people always talk about his talking style and not the subject matter.

“Whenever KCR garu brings out the facts, the talking point will always be the way he said, and not what he said. I don’t think he said anything wrong! People are diverting the issue and not discussing the subject. His confidence and ability to speak on diverse issues, knowledge, etc., makes people root for him,” Balka Suman explicates.

Actor Vijay Deverakonda too has been constantly criticised for his wearing his heart on his sleeve. Despite his super success, the Arjun Reddy star is known to speak up front, which has always become a talking point in the industry.

Put that to him and he replies, “People like me for what I am and the way I am. Since I am not from the industry, people tell me that I should not wear my heart on my sleeve. But I say whatever I feel, and I love doing things my way. And I think that is what brought me so far. I feel everyone should have the freedom to be who they are, without harming anyone. Because of my attitude, people called me ‘rowdy’, and I took that tag proudly, and it is a very positive connotation.”