The Reality of life

An exhibition of artworks that take you back To the artist’s days of boyhood. 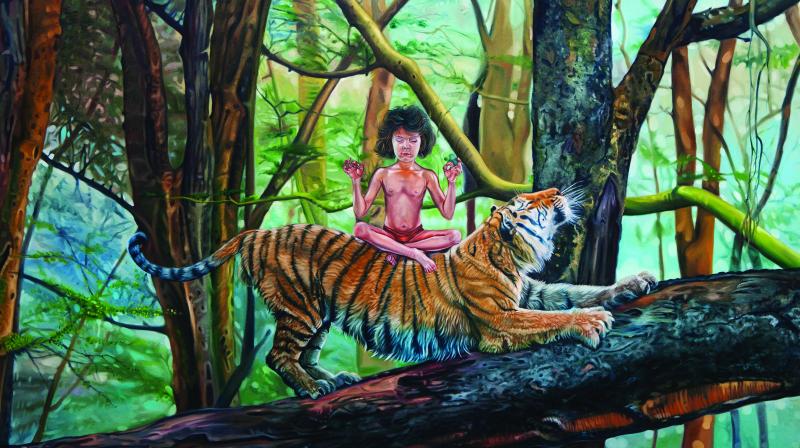 A solo art exhibition ‘Growing wild’ by Rajesh Ram recently took place in the capital at Palette Art Gallery. Rajesh exhibits his recent body of work comprised of life-size bronze sculptures and oil paintings. (All cause of king by Rajesh Ram)

In this exhibition, the artist displays his boyhood memories of the village life that intertwined with the moralistic teachings of popular children’s proverbs, while also expanding his exploration of the binaries of human and animal, rural and urban contexts.

“I draw a lot from my experiences in Jharkhand, which has traditionally lived close to nature. Over time, nature has lost its beauty since urbanisation has taken over. The concrete buildings have replaced the beauty of trees and mountains that are merely shown as a showpiece which has inspired me to show the work and reflect the difference in an urban and rural lifestyle,” expresses the artist.

Talking about the challenges, Rajesh says, “The major challenge of the exhibition was to show the reflection of boyhood memories of village life intertwined with the moral teachings.”

Rajesh explains the reason behind titling his works ‘Growing Wild’ saying, “This (title) expresses the contradictions of growth of one species over the rest. Development becomes the part of the circle of life and this shows the character of nature to grow in its own ways.”

One of the artworks of Rajesh names All causes of the king. The artwork displays the man-animal harmony where the laws of the jungle prescribe the rules of society. “It also suggests a desire to balance with-in and between the eco-system. In large part, though the imagery is closely reminiscent of the classic film the jungle book, its young protagonist Mowgli and friendly father, tiger Sher khan,” he adds. Speaking on the other work, titled ‘Success’, he says, “The sculpture is has a youngster standing and riding on giraffe head which implies the choices in life which mean love free unbound by shackles.”